There appears to be a bug causing a lot of dropouts the last few weeks. This is affecting most of my teammates

Are you using any mesh wifi networks?

Mesh networks aren’t an issue except when it comes to connecting Zwift Companion to the game. Any wifi network can have issues, mesh or not.

The change to “Share with my club” at the end of a ride now always defaults to the last club I shared with.
But if I last selected “No Club”, it still defaults to the last actual club I shared with (even if that was weeks earlier) - rather than defauting to “No club” which was my last selection.
If I don’t spot this, it then shares to a club when I don’t want it to.
So…

In my opinion, if you see UDP or TCP network disconnects in Zwiftalizer, it’s not clear if this was caused by the server or client’s WIFI network.,

This is a very welcome improvement, thank you!

There’s zero evidence that it was anything to do with it being a mesh network, as opposed to it being a different wifi issue.

One single report of a wifi issue on someone’s network (which hapoens to be mesh-based) doesn’t mean that suddenly mesh networks are no good for Zwift.

We rode a meetup there this morning. A warmup for WTRL TTT. Pretty cool scenery.

Cool! I tried later on in the day and was able to select one of the new routes. Looking forward to sight seeing!

Yeah, the 2D map was pretty much unusable in some places. The magnification varying depending on where you are isn’t new though, it also happens at least in the Harlem end of the NYC map. I don’t really see why it would not just stay the same (whichever of the three options you choose) wherever you are, even the less extreme NYC variant is a bit confusing.

A post was merged into an existing topic: Urukazi update: Audio echoing and VERY LOUD

Same. Not on ATV as of Thursday morning mst

Have you checked that lately? I downloaded the ATV version yesterday afternoon (MST).

Hi @Jordi_Riu_Popito, it looks like you made a manual turn or something in your Mech Island loop activity, maybe it was just a glitch. I got this badge yesterday, it was the first route I rode on the new expansion and it worked fine. I then did 2 other new routes and both worked, got the badges. 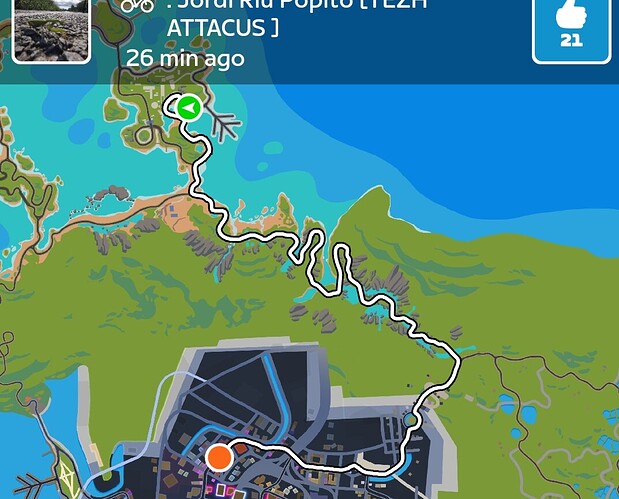 FYI about the training plans

Hey everyone, thanks for weighing in on this discussion. We’re looking into it as I write this.

I lost all my progress of my trainingsshedule

e to on the “build me up plan”