Hmm, mine looks pretty smooth. No annoyance factor in terms of smoothness. UI could be better but I just learned how to scroll right so I’m over the moon.

You’re on a different OS and graphics architecture though, this may be restricted to Windows/Nvidia or whatever.

I first reported it in March, apparently nobody gives a toss. Just thought I’d mention it as it’s typical of the poor user experience being discussed here. As is the unedifying way the game exits.

Thanks hadn’t seen your earlier post but sounds just like it so confirmed bug but seems rare.

I agree with having Missions, Events, Workouts, and Pace Partners as their own tab.
That would help quite a bit. It makes a whole lot of sense.
It may even eliminate the horrendous horizontal scrolling.

I said it months ago. I’ll say it again.

This is going to be a nightmare on AppleTV, which is my primary way of using Zwift.

I’m getting the avatars flicking after latest update. Win 11 and Nvidia 3070. Not sure if it’s related.

It’s the ‘boatload of nothing’ area that really most needs to be addressed, which in turn of course is making scrolling that much more necessary to get to the areas of ‘something’.

Some of that ‘nothing’ area is supposed to show all of soon-upcoming events you’ve signed up for. Why not put those instead on the page that the Events tile takes you to? The top row is supposed to be able to fill up with missions. I don’t know if it’s intended that someday there’ll be 6-7 of these available at any given time, and/or why missions are given top billing real estate? 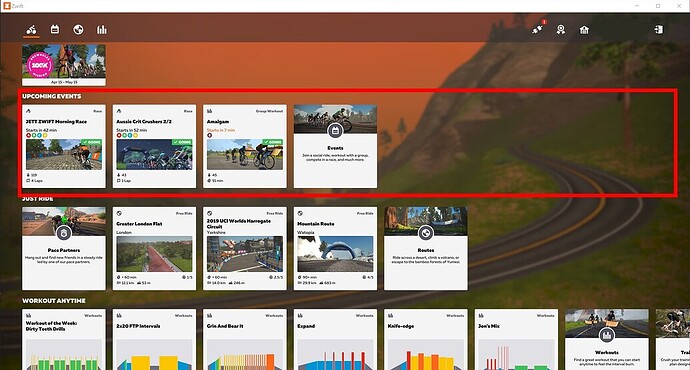 I was trying to scroll using a Trackpad this morning and it just wasn’t happening.

Just in case this is the issue – the whole screen isn’t scrollable left/right. You would for example, need to have your cursor hovering in a row that extends off the screen, and when scrolling, only that row will scroll. Up/down scrolling though, all columns/tiles move.

I still have the old UI on android and it is just better, everything is easier to access, fewer clicks needed, remebers the last route, ride with function etc

why didn’t they just add the garage and settings to the old UI? would anyone have not been happy with that?

Since this update i got these kind of screenshots: 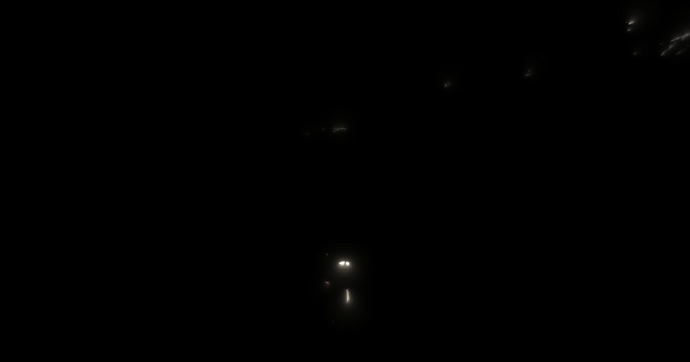 Not always, the good ones are also there (1 with HUD 1 without)

This is not even an issue, just to let you know.

Another bug thats been around for a bit …

When uploading images in Windows 10 (latest Zwift version) and removing the HUD elements (using the icon) the image gets partially black. Deselecting HUD shows the normal image again. The image is also uploaded to e.g. Strava in this way. I found examples in the forum of full black images, but not p…

This is the auto screenshot that I’ve been getting.

I don’t know if it’s intended that someday there’ll be 6-7 of these available at any given time, and/or why missions are given top billing real estate?

More than likely, the missions are from companies paying Zwift to make a mission.

In fairness NASA has spent billions to get the same photos as Zwift. You’re getting a bargain for only $16/month.

Smart shots or whatever it’s called is ridiculous. I was fine w/a single auto shot. It worked. It was simple. It was great. Now, I’ve got to go thru and unselect a bunch of pics because I only need want one single pic uploaded. After yesterday’s MAAP Stage 4 I had to unselect 5 pics. Perhaps you should make them default to ignored. If the user wants them, he can enable them or give smart pics an on/off setting control in the settings panel.

Hello, I now feel as if I have to perform better than before with pace partner Dorothy??? Approx 1.4- 1.5 kg/w

I feel it’s great that they added it, but feels like it should be an an opt-in/out setting. From the feedback, people with lower performing systems get performance hiccups, which is not cool.

Do wonder if it’s a server/Zwift side thing. As a test just started this morning without any of the fixes. No flickering at all. nothing changed locally.

But at least if it starts again. I have your fixes your kindly pointed me to. Thank you.

I agree… and we are also getting lots of auto screenshots (uploading to activities and on Strava) that are obviously when riders go through the finish banner, with the screenshot just shows the ‘loading results’ screen…

I don’t have a screenshot to hand as I obviously have to go though and ‘ignore’ these [pointless] shots.

Edit: to ‘disable’ the feature you can select in the settings menu for only your screenshots to be uploaded, but this eliminates the auto screenshots entirely.