I saw really low frame rate on neokyo/makuri the day after the update while doing a workout (have done free rides there since the update and they were normal).

The frame rates seemed to drop when someone was coming in the opposite direction.

After the ride I noticed windows update had been installing updates so I thought the poor performance was down to that.

My PC is very ow spec, 6th gen i3, 8GB ram internal graphics - i don’t really mind too much about low framerates as long as they are okay-ish but this was really bad to the point it froze for about a second at one point.

@James_Zwift XP in the game dictionary on your website, route name e.g. in ZwiftPrefs

Workouts seem to be an early common denominator. The overlay has a disproportionately high CPU penalty so I wonder if there are some new pinch points that in combination with a workout are causing the frame rate to dip more than ‘normal’. This might even tie in with the gradient issue between Neokyo and Yumezi, if there’s some mismatch between game/map data. I wonder if people reporting that bug were doing workouts too - it was fine for me doing a free ride.

I had the gradient issue in free ride mode (both times i have ridden it) - i’m not sure many people would notice it in workout mode as the workout would be controlling the trainer not the gradients/maps.

A weird one though. I’m normally one of the first to moan about frame rate issues, but I haven’t seen anything new as yet.

When selecting pictures to upload against an activity (on the save ride screen), if you click the top right icon to remove the HUD - so the ‘clean’ image is uploaded - it currently seems to be removing all ‘layers’, only leaving what appears to be a small bit of the bike.

Interestingly, I checked in the Pictures folder, to see how the clean version is saved there and it is also blank… BUT … any screenshot I manually take (of the effort graph at the end of a ride for example), has a clean version showing correctly, so it appears this is only affecting the auto captured (18:11) screenshot.

Tested this on a few rides and I am getting the same result
Windows 10 Gaming PC (i3-12100F, RTX3050 etc. with latest Zwift update running)

Has anyone else noticed this / is able to replicate this? 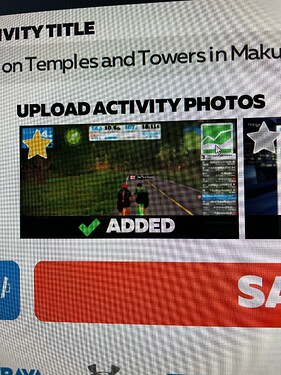 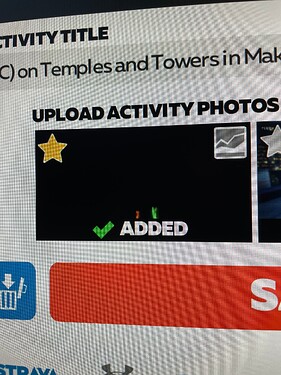 Today I have a second planned session in the evening where I’ll do just a normal ride in Makuri and will report back if I experience an fps issue or not.

The last two times where this fps drops happened whrere both while doing a workout. Could be related to that, we’ll see.

I’ll do the opposite - i’ll do a workout there later the last two rides I have done have been fine and they were free rides.

So, I did 90min on Flatland Loop this evening. To make things worse, I joined Charlie Chaser.

What can I say, I didn’t experience any kind of this horrible FPS Drops. Just the usual dip when riding in a pace partner pack. It performed even better than my lonely ride with active workout.

So the hard drops seem to have something to do with workouts beeing active while riding in Makuri.

Joined a meetup with about 30 riders. During the ride I got ride-ons from almost everyone, but in my ride report none of these ride-ons show up, I only see ride-ons from zwifters who were not in the meetup. Maybe it’s related to my changing of the activity name afterwards?

At the risk of not helping! I did a workout tonight and the performance was about what i’d expect for my set up. Neokyo was slightly worse than the makuri island bit but overall it wasn’t as bad as the other day when i tried (i think windows update was the cause of my poor performance)

Pedal assist will now last 10 seconds (up from 5 seconds) and last up to 60 seconds if no power is detected.

just started my ride, but I think Mike is onto it; something is messed up with the UI layer

No FPS drops, my CPU isn’t even maxing a core out in a free ride, same places as previous tests.

But check this out; as soon as a turn choice pops up, CPU maxes out. Happens each and every time too; 100% reproducible. 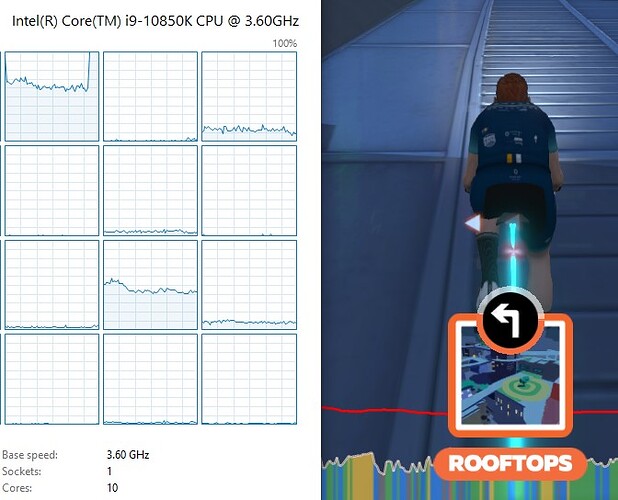 As soon as the turn signal goes away; CPU drops back down

So it appears whatever this UI layer issue is, is the same that’s affecting us in workout mode.

The release notes state “All workouts within a Training Plan are available from the first day of the plan”. Why has this not been implemented for the run plans? I’m doing the 13.1 HM plan and the workouts are still locked.

Hi guys, I can’t find a way to ‘join another rider’ with the new main menu screen e.g. if you knew a friend was doing repeats on the Alpe you could go to that world/ course, search for them and join them at any point wherever they were. Has this feature been removed?

this feature was removed, and Zwift is working on getting this feature added back to the new Home Screen. I would recommend taking a look at this thread: New Zwift Home Screen Update [April 2022]

@Andrew_Nuse will you open a ticket with Zwift support? This sounds very conclusive. CPU maxes out, no GPU calls, FPS tank. Maybe even worse during a workout.

It’s a bit of an Easter egg