Hello everyone. I am really new to cycling and trying to learn the ropes. I bought a used bike this summer (I have hardly ridden because I also run competitively and wanted to get through a marathon cycle before taking this on - I didn’t even have cycling shoes until last month haha). I also just got a new trainer for my birthday and am really enjoying Zwift. Being super competitive, I jumped in a few races over the last few weeks and was humbled at how good so many people are (especially some of my fellow female counterparts which is awesome). I was excited to look at my results this morning and went to the page and saw WKG and didn’t know what that meant. I read up on it and apparently that is code for being disqualified. I entered in the C category thinking that may even be ambitious based on the times I saw posted. The times in the B category are 2+ minutes faster than me. How on earth am I almost a B? Thank you for time.

Note: Zwift now shows your zFTP, MAP, and Vo2Max numbers in your profile on zwift.com (calculated based on the data they have from you which would include this race), so you can get a sense of what numbers they are looking at for Category Enforcement races at least, it will probably show you exceeded the maximum 20min w/kg for ZP C category in your race I would imagine.

Good question. I don’t believe I have entered a Category Enforcement race so I’m not sure.

I googled how to calibrate my trainer just to make sure I am doing everything correctly for accuracy in the numbers. My weight is accurate too.

I just got up this morning with the intention of working hard and doing my best to compete. My numbers were so much higher than the people in my category. I was cycling around 24-26mph on average, slower on the inclines, faster on the decents but I guess mph and finish time doesn’t much matter in cycling? It’s more about w/kg? I just don’t believe I belong in B (yet) with those times I see. I suppose if they do enforce and I continue to get DQ’d I will have to be in B and finish in dead last by 2-3 minutes. Haha.

If your raw power was the same as everyone on the flats, and you still weren’t keeping up, it might be because you were on a time trial bike (which does not experience any draft)?

If you are signed up to ZwiftPower you should see your 20min w/kg for that ride as well, which will tell you if you exceeded C category for that race.

Ok. My 20 min w/kg today was 234 for the race (bumping my overall score to 236 for 20 minutes). I was at 196 the last time I did this British Race event. Last time I did the women’s event. What a difference it makes when you ride alone vs. with others in this sport. Wow. In the women’s race, I was solo for much of the race and was so slow yet it felt so much harder. At least today I had a few people to ride with.

Thank you for the edit explanation of how the variance in weights work. It also seems that heavier riders may have a bit more strength uphill (or maybe it’s just that I need more work on the climbing).

I have an older version of a Specialized Roubaix bike. That’s not a time trial bike, right? I’m so sorry for sounding so ignorant. I just really am so new to this. (I could give you advice on sneakers for running if you need it - ha).

That’s not a TT bike, so you should be ok there.

Thanks for all your help tonight, Aaron. Much appreciated. I will continue to learn. Cycling is very fun!

Don’t compare your time finishing a course in C cat or free riding with those of a B cat race. When you are in a race you will be (or trying to be) in the draft a lot and thus going faster for the same power. The lead bunch in a B race will be (nearly always anyway) going faster than the lead bunch in a C race and if you can stay with them you will get a much faster time than riding in the C race or alone.

Thanks, David. That’s a really good point. I have found on the few group rides that I do, when mixed in with a large pack you can really get moving. (I have also learned that once you drop that pack, you just want to pack it in…ooof - what a difference that draft makes). I was only with 2 others today on my ride (both of which dropped me in the final mile). There were only 15 total in the C race and it seemed to be pretty strung out. What a difference a pack makes.

Does the draft feel the same way when you are cycling outside on the roads? Getting out and really getting after it on the roads is a fear of mine. I need to learn how to navigate with clip shoes without killing myself as well a figuring out how to be comfortable with cars around me. I’ve done a few rides outside (Central Park would be the safest place I’ve ridden but even then if you don’t go at super early hours, tourists become a HUGE hazard - I witnessed a tourist get killed by a cyclist one evening years ago). But that’s not the point of the thread…so…

I have an older version of a Specialized Roubaix bike. That’s not a time trial bike, right?

I believe they were referring to what bike you are using in the game, what bike is your avatar in Zwift using? The bike frame makes a difference. TT bikes dont get draft, mountain bikes are slower on pavement, gravel bikes are in between, etc… you should check out zwiftinsider.com for detailed articles on just about anything you might have a question about.

Thank you, Mike. I am not sure what bike I am using as my avatar bike. I will check though. I appreciate you sharing the link.

It looks like you put down 4.0 w/kg for the duration of the race (~26min), so for sure they’ll bump you out of C category, whose upper limit is around 3.2 typically. In point of fact, 4 w/kg has you not just in, but at the very upper threshold of B category (!). Good for you for being strong on the bike; sad for you that you might not be near the front of those B races. As you’ve already seen, being in the draft matters a lot; learning how to make maximum use of the draft (basically, being as efficient as possible and using as little power as you can while still hanging with your group) is what will get you back up near the front. And as has been said, your weight and raw power mean you’ll have to work harder on flats, but that you may have some advantage on hills, etc, etc. 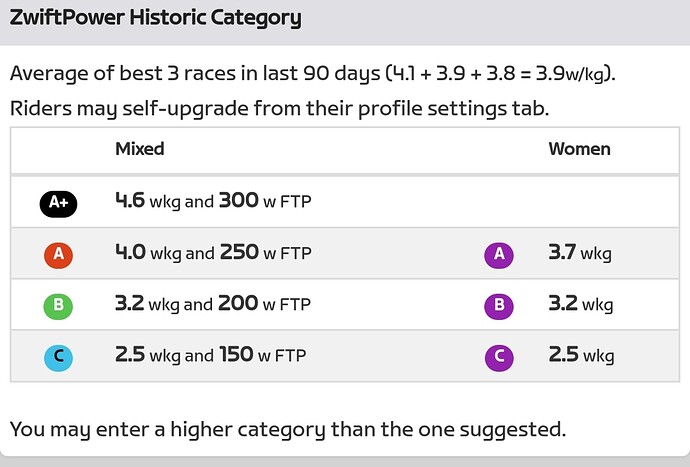 And with a 4.06 w/kg average in your last race you are closer to A cat.

Thanks, Xavier! There are so many people so much faster and stronger than me. I don’t understand how I got that number. I feel like it is some kind of mistake or misrepresentation or something. Maybe not…maybe I should just embrace it and accept the challenge. I’m less concerned about winning in the B race than I am about riding by myself 5 miles behind the lead pack! That isn’t fun! I completely understand your comment on being efficient with the draft while still needing to stay with it.

How do people get those huge max numbers in the 700’s for power? I don’t think I’ve ever gotten above 300 or 400. I imagine myself having to cycle like out of my mind on the highest gear to get that or something…I may need to wear a helmet with all the thrashing around I’d have to do. Haha.

That just seems so inaccurate to me (myself being anywhere near that category that is). It’s laughable really. I have no cycling experience. I’m in pretty good shape but that’s where it ends. I do want to be good at this though! It’s a fun challenge.

I bet with your running background you are quite competitive and will really enjoy Zwift racing.

I would suggest you go to your ZwiftPower profile, settings tab and tick that you are available for recruitment. I’m sure there will be some teams keen to recruit you and you can start racing in a team, where I suspect you will thrive.

That would be so fun! I actually did see that feature and clicked it on. But I’m ranked like 524,000 out of 524,001 or something (haha) so I figured no one would want me just yet. But I’d be a competitor. I’m not sure if I would do good things, but I’d compete tooth and nail.

It’s probably obvious to you, but the lighter you are, the less raw power you can put out and still have a high w/kg ratio. That would explain why you don’t think you’re smashing it in terms of raw power, but you still have an upper B cat w/kg output.

Edit: Also, the “no cycling experience” part is less of an issue on Zwift (where bike handling isn’t a thing, so in simple terms it’s strength + fitness) than outdoors on a real moving bike (where it would be strength + fitness + traffic + obstacles, etc).

Does the draft feel the same way when you are cycling outside on the roads?

Yes and no. Yes in that it is way easier to go faster in the draft and no in that there is nothing that you can feel in the draft in Zwift (you just go faster for the same power). In real life if you are in the draft and pull out into the wind you suddenly feel the headwind and have to up your power or you slow down quickly.

I was in New York for a weekend in the fall and I wouldn’t be comfortable going fast around Central Park for the same reason, pesky tourists like myself!

Ah. Yes. That makes sense. I believe I am relatively strong and fit. I’m eager to get outside and cycle but the traffic thing is scary. I just read an article about someone in my area (Boston) recently getting hit by a box truck a few miles into her ride. Broken bones and such. Terrible. I’ve known two cyclists in my life killed by cars too. And the obstacles - I would need to learn how to handle a bike at high speeds going downhill. I’ve just heard about so many accidents. I want to compete but not at the expense of losing my life or breaking my bones and being out. I was reading about these hotels in Italy that have cycling vacations that looked really cool. Maybe it’s safer there??