@James_Zwift After another great session with a D-bot in Makuri, a request to go low on the priority list: I use the scrolling effort chart across the bottom of the screen and the banner for Debbie(?) is yellow with white lettering (distance front/back)…for older eyes the contrast is negligible and most of the time I cannot read. Any chance of changing the font color?

Otherwise thanks again for putting in all the different levels. Really has been helpful.

Understood - this has been brought up a few times.

Everything I am doing with Pace Partners is using existing functionality. I’ll add the colours to my wishlist.

They’re on Zwift Aero / Carbon wheels whilst they earn the right to have better ones.

I’ve only just realised why I find the newer PPs slightly odd, visually. With them not riding glowing Concept Z1s, there’s something odd from behind about a brightly glowing pair of zwifty haunches on a black saddle!

Nearly fooled me today, as Anquetil was “demoted” to C when I logged in and Brevet was a D. That would’ve been a bit of a shock, especially for novices!

I was able to “solve” this on apple TV by simply not pedaling until the bot appears.

It’s summer where I live so I am mostly outside and therefore slow to notice changes. Today I discovered Charlie Chaser in Makuri Islands at 3.0 w/kg and 75 kg.

I got dropped when Charlie’s power increased to 3.3 w/kg going uphill but that’s ok for my first time trying it out. I was finding Coco a bit too easy and it’s a nice challenge to have Charlie a bit too hard.

Thanks for adding this one. I don’t know Zwift’s long term plans but I hope Charlie sticks around.

I’m probably posting in the wrong place but haven’t found my answer elsewhere. I can’t tell from my own experience whether drafting occurs or not when riding with a pace partner. I understand no drafting effect is experienced on a TT frame, but what about when riding on the Zwift Concept frame? I wish Zwift published a “Users’ Manual” so I could find answers without scrolling through a bunch of posts. I still don’t know what all the symbology means when I’m riding with the app. Despite that I really enjoy riding with Zwift and appreciate the developers work.

You will get draft when riding with a pace partner as long as you are not on a TT bike.

The Zwift Concept Z1 “tron” bike is a road bike and you’ll get draft when using it (true for everything except TT bikes). Pace partners are just like any other rider.

I wish Zwift published a “Users’ Manual” so I could find answers without scrolling through a bunch of posts.

Check out zwiftinsider.com and you can search for all sorts of things you have questions about like the symbols on screen you’re unsure the meaning of.

Is a Zwift Concept frame a TT frame?

Thanks, Mike. I’ve been to Zwift Insider many times but only find about half the answers I seek. I’ll keep trying.

Thanks, Aaron. So I should be able to draft while riding that frame.

Right, the one difference with the Tron is you don’t get the “sit-up” animation that other bikes get while you are in the draft (because you’re always hunched over on the Tron). So, it might be less obvious when you are drafting, but you do still get the draft on the Tron/Concept bike.

Unfortunately most of the useful knowledge in Zwift is gained from experience. Hang in there.

Thanks, Paul, got it.

Understood - this has been brought up a few times.

Everything I am doing with Pace Partners is using existing functionality. I’ll add the colours to my wishlist.

Any update on this? I’ve been riding with the D pace partners a lot recently, and I can’t tell how far behind me they are unless I squint and really lean in to the monitor.

As noted before, simply changing the text colour to black for the D partners would be enough.

I noted today that ride leaders do already use black text. 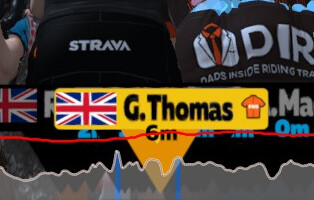 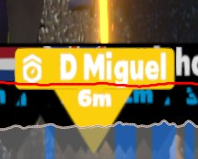