I was forced from B to A after my last race. It was a long race, so I averaged way low - I did do some max efforts, but nothing crazy (1min 5.7w/kg, 2min 5.2w/kg, 4min 4.5w/kg). I am aware that you probably have other ways to calculate vo2max, map and cp - however, I tried with my own calculations - and saw nothing that came close to an upgrade. I finished 23rd from 41 B riders…

According to intervals.icu , my 2-parameter Critical Power before my late July Covid/flu, was fairly close to the pre-5% extra limits that would have promoted me from B to A based on sub 20min all out races. 3.89W/Kg.

Your stated 1/2/4min W/Kg efforts are all higher than I had back then and nowhere near over a month after time off work.

Did you do any other efforts in Zwift because all activities count for calculating your power curve for Category Enforcement…even if you delete your ride. Do you share your account?

Looking at your Zwiftpower Power Curve you should be in Cat B.

I don’t think there is a bug in long races. I think you will find your effort in the race up Bologna on 22nd August is part 1 of the reason you may now be CE Cat A.
Part 2 of the reason is that you entered a new race weight for this last race and having raced your new, slightly lower, weight has been used in your new CE calculation.

Nice catch i missed the weight change…that could be the reason.

Bologna and weight actually sounds like it could be at least partially an explanation. I was focused on the long race, since I was bumped to A the day after that ride.

intervals.icu only has my CP at 3.93 - but Bologna effort is shorter than 20 minutes, so an algorithm difference could make that higher. Could be the 10 minutes at 4.5?

Did you do some big 2-5min power numbers in free rides or workouts that dropped off the 60 day window? That could also have an effect in flattening out your curve a little.

It sounds like you’re very close. Your long race did have 26min at 271W, but that shouldn’t have mattered - I think a combination of Bologna and weight change. 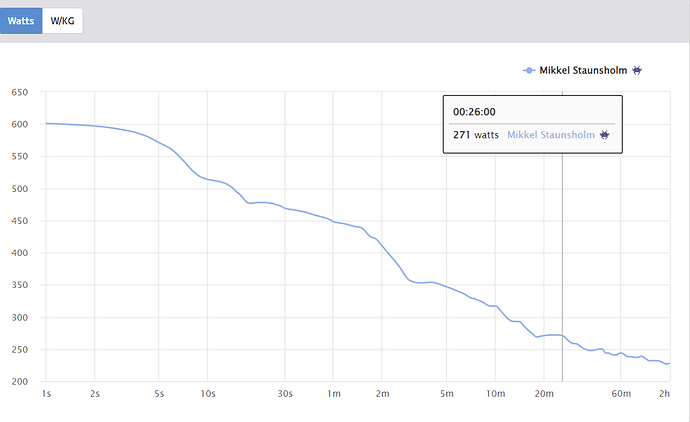 I had bigger numbers back in winter, but I have not done anything special for the last 60 days. It seems like I should be under, but I agree it could be close. So, I am going to take the bump as a compliment - maybe I have some hidden strength

Thank you all for your answers!