Please help.
I’ve been a B cat for ages now and have pretty much always raced as a B, I now cannot enter category enforcement races as a B I’m forced into the A’s yet Zwift power clearly has me as a B with a best recent result at 3.86w/kg @ 95 %. My average last 3 races puts me at 3.64w/kg.
I know for a fact that if I race with A’s I get dropped as soon as we climb. Then spend the rest of the race on my own. What’s the point.
I’d like to be put back as a B please 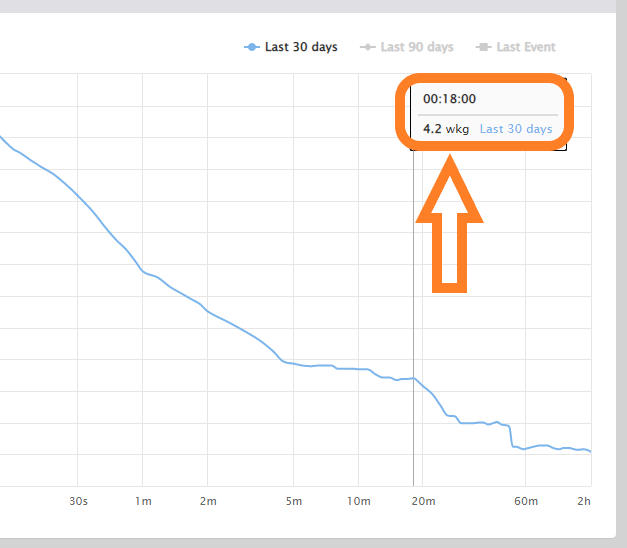 It’s actually 4.07w/kg if your looking for the 20min power. I know it’s still over but it was a shortish race. Yet I’ve been racing against one rider recently that because his power is lower than 250w and he’s a light rider he’s still a B yet wins virtually every race he enters. Also has a stupidly high 30sec and 1 min. Would hold quite easily onto A’s yet is allowed to race as a B. Now for me will be just a case of riding around on my own. I’m not getting any quicker as I’m getting older. Lol. I’m all for fairness and enjoy the tactics involved when racing at the higher end of the B’s but now if it stays that way based on one result it’s not going to really make me want to race which most the time is all I use Zwift for.

CE does not use only the best 20min.

See this for more information:

Category Enforcement - How is my category calculated? [February 2022] FutureWorks

Hi everyone. EDIT: view this before you read anything else CE101.pdf - Google Drive I have been in dialogue with @xflintx. We have both acknowledged there have been some communication issues, but by opening a conversation hopefully we have been able to bridge the gap a bit, and for that I am thank…

Can we get something sticked or put in a banner about cat enforcement as it seems pretty much every day there are several complaints like this and redirect them to that? And this is the sort of thing we need to be able to see metrics for

I’ve read it and understand it. However for one good result which is potentially just over the threshold I’m now not going to enjoy the 30-60 minute races as I’ll spend most of it out the back. I’ve not got the extra time to train more to get better, like I say I’m not getting any stronger just older.
I trusted the Zwift power method before. I’ve done enough races to sense which riders are out of category. This however doesn’t stop them influencing and spoiling races. But at the end of the day they would get disqualified by Zwift power and that was ok. It’s all about the Fun factor if it’s not fun and rewarding then racing in CE races is no more, yet this is where I thought Zwift would improve but doesn’t seem that way.

It’s all about the Fun factor

And for many of us CE is bringing back the fun factor.

probably me right… i sympathise with you though. there are non category enforced races about still. most 3R ones are non CE, there’s a 70km flat one on thursdays called MEC Bikes NZ - Ride / Race (supposedly its not meant to be fast from the start but usually people try breakaways anyway, it’s long enough), or if you want to get involved in leagues then TFC runs a series on mondays. I think you have to apply for an invite through their website though

Maybe I’m old and don’t know what I’m talking about but I’ve never heard of 18 minute power being used for anything. If you want to guesstimate your FTP 95% of your 20 minute is a great start but that doesn’t bring TTE or anything like that into the equation. I need to do some reading on how CE is calculated.

Wait for a few days and you will be back in B. Someone told me that things are changing this week

But it’s not about FTP people need to realise that and change their way of thinking towards the metrics being used, this is why there needs to be more information from Zwift

Most fun racing I had was on the way up through C, I started a ZRL season low C but was losing weight at that stage, was a good C by the end. Fun racing and tactics.

Became a B shortly after season and have been floating about the back for 2+ seasons now. Nowhere near as fun (and the whole banning-gate incident) I just try to hold the pack as long as I can and add some points.

As perpetual improvement is a myth (I have stopped losing weight). There are only two options. 1. have fun some other way 2. sandbag back to C.

I’m too honest for 2 as I wouldn’t find it fun knowing I was sandbagging anyway.

I’m a bit frustrated that we get to see elimination races for the top teams this year, but no game mode that can be rolled out for everyone. Its taken 174 races for TTT to get a start system, and everyone has just lost access to the data that would have allowed us to create elimination games privately…(I was working on it)

They should extend the Cat lettering down to the letter F, then move everyone down 1 Cat. I think everyone would then be happy, no?

It would also help if the categories didn’t have such wide power bands (more categories). Of course this would reduce field sizes. Taking the categories with the largest regular field sizes and splitting them in half would be one approach that would mitigate the problem. Ultimately any ranking system that has very broad categories is going to suffer from some of the same problems we are seeing now.

Anyways have I now got to wait 60 days before I get downgraded back to a B??

People are right racing and categories is not all about ftp, in the context of Zwift it appears to be more about watts/kg. Yes, I guess it should be.
But as for the categories D-C 1.4w/kg difference C-B 0.6w/kg difference B-A 0.7/0.8 w/kg difference A and above there is no ceiling. So I feel for everyone that is just at the bottom of their cat. At least B down the differences are there but the riders above could be in reach once you get to A there is no ceiling to what your up against.
I blow myself to pieces in B races to try and get a result sometimes it works sometimes it doesn’t certainly don’t walk away with anything. But now with the CE I have no chance. We all know what it’s like to race against a rider that can produce over 1 w/kg more than you.
Then there’s the women racers my other half is also forced to race as a B however she’s in the lower end. But being female she cannot match the raw power the males have, and still struggles against male C’s because of that, but can at least can compete. So it was fun for her, now she doesn’t bother.
I’ve been using Zwift since it began and enjoy the racing I also take it with a pinch of salt, but it beats zonal training. Bored of that.
The system is good but also has flaws, I don’t know what the answer is.
Think I’m feeling hard done by lol.

I feel your pain, I had the same issue so couldn’t race on Zwift for 60 days as I was put in A due to one 13 minute effort in some group ride.
I am now to a point that I am not using Zwift for training or efforts as it might put me back in A.
I am afraid to go all out on Zwift now because it will make B races unavailable again

Always easy to say when you are not the one getting placed in a CAT way above your skill.

Really wished they will use ELO at some point.

A, B, C, D… they’re only letters. Maybe there’s too much legacy baggage that people feel that each letter actually means anything permanently.