I have searched but cannot find my answer in any existing thread.
Anyone knows if a bike’s weight is in % of the raiders weight or if it is a fixed “kg”?
and if it is a fixed kg, does a smaller rider who would use a smaller frame get a lower weight on his bike?

The bigger and heavier rider gain more from aero in general I’d assume, since bike weight is smaller % of the total.

The smaller and lighter rider may have more advantage going lighter bike than aero in certain scenarios due to smaller bike with less weight and smaller body with less air resistance.

There are only 5 sizes of avatars in the game (three male, two female)–so if there are different bike weights, would there be only 5 of them?

Or, given that all the avatars seem to be the same height, with the same inseam and reach, maybe all the bikes are exactly the same size regardless of H/W profile settings.

When you “buy” different wheelsets, as an example, they talk abut weight and aerodynamics. Clearly weight factors in somewhere

got it. In real life it doesn’t. Why would they do it for the program?

It does in real life a 58cm frame will weigh more than a 52cm frame.

So if the rider is bigger the frame would also need to be bigger and therefore add more weight.

Whether it is really enough to make much of a difference is a separate question.

Same goes for helmets and clothing fwiw. But we aren’t asked to provide our head sizes. Zwift need to address this now!

I mean…I’m not the one bringing this up in the first place. But Zwift, and Zwift users, certainly care a lot about rider weight when it comes to racing. And the difference between a 60+cm bike and a 47cm bike, same model and build, will often be measured in pounds, not ounces. I’ve seen 2-3lbs differences between 54, 56 and a 60, 61+ of the same model and build of carbon bikes. IRL, that’s not insignificant.

There’s a point where you’re talking diminished returns in programming these things into the game world, of course. But I bet people would get upset if people’s body weights were being misrepresented by 2-3 pounds (they do, they do get upset). Again, I’m not OP, but I’m curious if Zwift does have different weights for the bikes of different sized avatars. I wouldn’t protest if they didn’t, but I wouldn’t protest if they did either. It’s more significant than the slippery slope attempt of equating it with far more minimal differences in the weight of lycra at different sizes. Just because it doesn’t make sense to program in the weight difference of XS vs XL racing bibs doesn’t mean that programming in bike weight differences would also be silly.

That’s assuming people actually changed their weight every day and during long rides (a rider can loose 2lb during a 2hour ride).

So not having bikes of different weight has very little effect.

If you mean that not having different bike weights (if they don’t, I don’t know) is something no one is noticing, then yeah, not having them has very little effect. It’s hard to notice an absence, and it’s also maybe not a factor a lot of people think about. Doesn’t mean it’s not a real factor IRL.

But for people who are concerned about continuing to get Zwift results closer to IRL results–I guarantee that the weight of my XL frame bikes IRL is helping me descend faster than other people, to a not insignificant degree. And the same extra frame weight is helping to slow me down on climbs too. That it’s never been in the game (if it hasn’t, I don’t know) and so no one has noticed it sounds like a “we’ve always done it that way” sort of argument, doesn’t it?

And the fact alone that people don’t change their weights doesn’t mean that this other factor that would be significant shouldn’t be accounted for. Should we not care about the weights of different models of bikes because people don’t change their body weights? I don’t get why that matters. Bigger riders, whether they frequently update their weights or not, will be riding heavier bikes. If I’m on a long ride and I lose 2 pounds of body weight, my bike doesn’t shrink to a smaller frame size

Bike weight in that way is independent of how frequently someone updates their weight.

Again, to be clear, I’m not at all saying this needs to be done, and I’m not the OP. I’m just saying that it’s not an insignificant factor IRL, and therefore doesn’t seem to me to be something to obviously dismiss here. At least not for these reasons.

I personally don’t care if there is different weights for different bikes. I don’t think it will change any result of any race.

True, but 2 pounds on 60 kg could maybe theorethically give a little quicker acceleration on a sprint. Make little better impact on climb, vs aero etc. I’m light, rider so its interesting for me. If id be heavier, its a non issue.
Since a race/sprint is won/lost with the smallest margins, every little detail may have impact when its super tight race.

Since a race/sprint is won/lost with the smallest margins

And 90% of races end on a flat road where weight play an very very small part.

But as I said I don’t care either way just saying that it will have little to no effect on racing, there is much bigger fish to fry.

Yes. Heavier rider seems to always go aero. I very often ponder if i should go light instead if aero. Since im light, small weight difference may have a much bigger impact, if weight on frames/wheels is a fixed weight. If it’s a % of raider, then it doesn’t matter. More often these days i go light, little harder to stay with the pack but then i get more of an advantage when the climb comes. No idea if its better or not but trying to understand the logic behind, so i can make as information based decisions as possible. For a light weight girl as an example, it maybe a much harder decision vs a heavy guy, who will always go aero

Tron bike or not? Aero, but bad climber. As a heavy raider, Tron is great and the weight dissadvantage doesn’t really matter and its great for the descent. As a light raider Tron climb performance matters more, its where i either manage to stay with the pack, or lose the race. For AdZ challenge, my lighter setup made me climb almost 15 minutes faster than using Tron bike. For hillier races, Tron is not as obvious to me as for the +90kg guys.

Since its very hard for me to win the 90%, i think how/if there’s anything i can do to give me a competetive edge on the remaining 10% of the races that ends with a climb

I completely agree that there are more important priorities for the Zwift team to tackle. My interest in this shouldn’t be mistaken for a demand that something be changed.

But AFAIK, the question isn’t even settled about whether the different avatar sizes even do have different weight bikes. Never heard anything about that, but it’s not like Zwift is super transparent about those things–they won’t even tell us which frames and wheels are faster, other people have to do that. And for all the tests that ZP has done to rank frames and wheels on flats and climbs, have they ever run those tests with different weight users? I have no idea.

I don’t see this as any kind of urgent issue, but it’s an interesting question on two levels. Does Zwift do this or not? And what effect would it have if they did? Neither question has been answered yet.

Same here. I am not requesting Zwift to do/change anything. Just wanted to understand more so I can make smarter bike/wheel selections for different races. Else why do they have different weight/aero and not just a pure visual skin like in many other eSport games.

2 links that shows that it does matter somehow 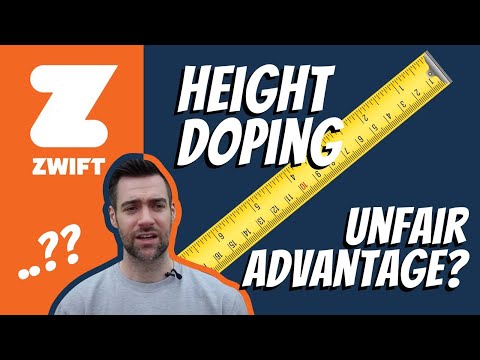 Assuming ppl are not cheating, but their body composition is as it is (tall/short, light/heavy, skinny/muscular), based on that, how to select the best setup that matches your particular body type and maybe based on that, know if one should focus on being better at a particular role in a cycling team. This stuff is interesting and keeps me awake at night

so I can make smarter bike/wheel selections for different races

From this I understand your question a bit more. So yes different bikes and wheels does have different weight and aerodynamic properties.

You can find a lot of information here: Fastest Bike Frames and Wheels for Intermediate Zwifters (Level 30 and Below) | Zwift Insider

Checked those sources.
What I’m curious about is if anyone may have info if the frames/wheels have a specific weight in kg, or if their weight might be a % of the raiders weight.

Doubt the weight is adjusted/related to raiders heigh though, that would be realistic but utterly complex.