the one that contains the finishing banner

In terms of route to fill an hour ish my favourite would be Watopia figure of 8 has everything and road to ruins used to run it close.

I quite enjoy the pace partner on that route - Makes for a good hour with Brevet.

I really like the bypass road at the base of epic kom, something about being on the edge of a cliff with the whimsical waterfalls and ruins is very appealing to me.

R.G.V… A nice spin through the always sunny French countryside.

Grand Central, reminds me of my typical South Downs lane rides March-Nov depending on weather and my health between Bishop’s Waltham/ Hawkley/ South Harting, moderate up/ down/ gentle rolling before it’s time to find the climbing legs again.

Its nice until the last 3km where for some explicit reason they zig zagged the course along the river - I just think it didn’t need so many twists and turns.

I agree the “intestines” aren’t the best. I don’t mind them on my own but it does seem always to be a challenge to keep a group together through that section.

So let’s be more specific: The northern and eastern portions of R.G.V., past Mont Saint-Michel, through the village with the Pave sprint, and up to the aqueduct.

This spot is always nice to see: 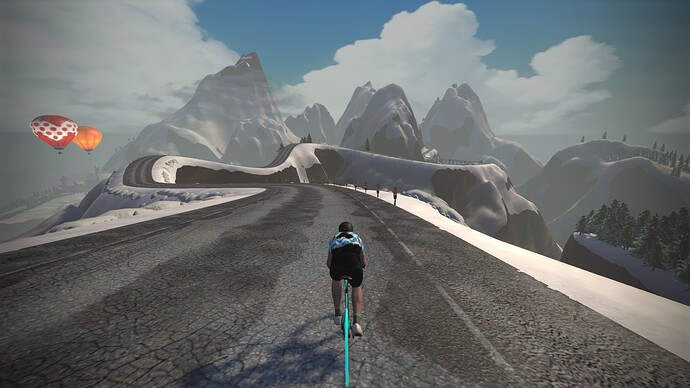 …and I like the longer Makuri routes that start in Neokyo, go out to the countryside, and come back.

I’m a fan of the Titan’s Grove roller coaster. Keeps me on my toes, and feels fun to ride.

It would be easier to talk about the roads I dislike…

@CouchTo1200K. I actually like the cliff side part better going the other direction…you can see over the side better.

Zwift needs to make us a “Ocean Lava Cliffside Reverse”.

Lots of good routes already mentioned, but some that I haven’t seen mentioned yet are the various dirt paths in Makuri Islands. Those are some of my favorites. Cheers!

+1 for Ocean Lava! It reminds me of riding in Nova Scotia. Would love to see it continue along the cliffs in either direction. And I also like the Makuri some-of-everything routes.

Perhaps instead of just an Ocean Lava reverse, we could combine several best-loved roads in this thread: start downtown, head out through Titan’s Grove, up the reverse of the cliffside cutoff, and then back through the Esses into town. Slightly hillier than Ocean Lava with Titan’s Grove in there, but also takes the gentler way up to the cliffside.

I just did your Titan-Cliffside-Esses route an it was Great!
It took me 1hr 10 minutes at an average of 1.3W/kg.
My ride measured 24.6 km and 318 meters climbed.
I skipped the Italian Village by taking the bypass by the 360 deg bridge to get to the Esses. I think going thru the Italian Village would be just a bit longer.

Agree, jungle looks great but is terrible to ride through. Just tunnel past it so we get straight to ADZ in minimal time and distance.

My favourite in terms of looks is France and Ven-Top. It looks great.

Also Japan looks great in the city with the lights and the trees.

I’m really diggin the Two Bridges Loop.
I would like to see a 3 or 4 loop race.

My best rosd on zwift …

Has to be any DOWNHILL . Especially from the Radio Tower .