Should send them an invoice for your time.

You know there’s something seriously wrong with the sound when the speakers in my previous headset explodes after a little trip in New York​:joy:

Fortunately for you, the headset was one and a half year old. I have bought new ones that are just as cute as the pink Tour the Makuri bike kit and I’m waiting to ride in New York again until the sound works fine

Yes, ive had this too… Windows get around, head to system->sound-> Volume mixer and turn the zwift volume to 0, note you need to be in zwift to do this.

This way, like me i ca still have my speakers blasting out 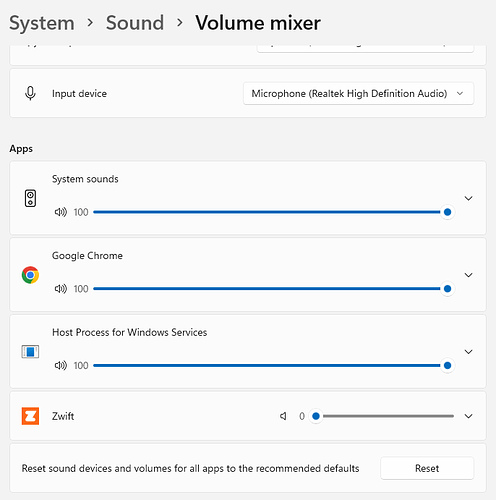 I know that this is possible, but I would like to see Zwift fix this issue. I don’t understand why Zwift doesn’t just rotate out New York for another world to give their developers time to fix this. It would also frustrate users less.

I am not trying to be unduly harsh here, but approaching 3 weeks later, there is still no fix. As someone who has used this platform for 7 years, I am awfully patient about some of the “Zwiftisms” I have observed over the years; however, I am growing quite weary over the clear lack of attention to detail.

This “bug” (among the others) that completely ignores user-based settings, which should be a core component to any game, should NEVER have been released to the community. The bare minimum testing/vetting would have indicated there was a problem here. Moreover, nearly three weeks of turnaround time (and counting) is unacceptable to not have a clear path to repair.

I can appreciate that Zwift has been better about responding to forum posts to keep the community apprised of progress and their awareness of issues, but what is Zwift doing to address root cause? Where is the accountability when the vast majority of major updates are fraught with a litany of nuisances and bugs?

I am sure this reply will be dismissed as a “Karen” post, but I am imploring Zwift to please look at your processes to better serve your customers.

what is Zwift doing to address root cause

They’ve said it will be fixed in the next full game release, which is presumably another couple of weeks away. Current/new issues with Zwift 1.31.x (November 2022)

Totally agree btw, this update has been a shambles. It’s like they’ve spent all the time slapping themselves on the back for the new expansion and totally ignored all the new problems. Not good enough.

Zwift, if you dont want to QA your product or fix in a timely fashion, could you at least provide two different streams for updates, one in which people can use that “just works”, the slow/stable channel would get features only after they have been proven to work and vetted by other users that need/want these new features. At least for me, i just want zwift to work… Too many times there are significant bugs that prevent me from enjoying a workout.

Doing a custom workout in Fine and Sandy, and have all Zwift sounds turned down, and can’t kill the sea gulls! I did Island Hopper last night and did not hear them.

Is it only on this route?

I really enjoy riding the NY maps, but man…that noise is unbearable. Is the Zwift team any closer to getting this resolved?

They’ve said the fix will be in the next release (1.32, presumably in December). Apparently they are not willing or able to release it as a patch to 1.31.

Last week I have experienced the same problem on Windows 10 when riding “ Zwift - Group Workout: Arise (E) on Douce France in France”. As a matter of fact, it killed my Yamaha AV receiver because the software asked to much of it. Today I replaced my receiver and started again to zwift in my pain cave. The same problem appeared in Richmond, so I ended it. Than I tried Watopia and there wasn’t any problem. I am very sure that my receiver died because of the sound settings bug. I am wondering if Zwift has any kind of policy for this kind of problems… Does anybody know something about this?

Based on Fabi’s points, I did the following workaround on OSX after opening a terminal. The results seemed fine (no sound whatsoever). I have my sliders to zero anyway since I’m listening to music while Zwifting, so this is a way for me to force the sound to zero on the Zwift app and allow my music player to play. For me, I don’t care about sound in New York, Watopia, or anywhere else, so this worked fine for my case

Warning: Never copy commands from the internet into a terminal without understanding what each line is doing!

I did some experimentation following the lead of Fabi and it appears that just removing the contents of the single file Main.bnk from the directory ~/Library/Application Support/Zwift/data/Audio/OSX/ is adequate to completely remove all sound from the game.

If you don’t like the terminal, in Finder navigate to your home folder, then to Library/Application Support/Zwift/data/Audio/OSX and delete Main.bnk.

If you want some sound to work (vs what I wrote which removes all sound), you might need to do some more experimentation (likely on the file World9.bnk) in the directory listed.

Still no fix from 10th november? Awkward … im in the free version but im going to cancel my subscription right away - dont want to listen to screaming speakers …

If you’re in the free version just don’t sign up until it is fixed, should be fixed in the next updated which should be out in under 2 weeks.

Not defending it but it is what it is.

Cool to hear this actually works!

Support told me they would adress the issue with the next update. Could just make a script to turn it on/off on demand if it takes longer.

So far I only had the issue in Innsbruck @shuji it was permanent everywhere, also keeps on playing then sound after dropping back to menu untill loading another world. I.e. at Lutscher right at the spawn/start point.

I would give them a chance. The next update can´t take forever. No reason for me to defend Zwift Dev Team at the price they are asking andI am not working for Zwift or anything like that. At the other hand I spent enough time in this game (13.000km this year) and have not encountered any serious game braking bugs and updates have been almost weekly. It´s not a normal computer game, it is a training app, but it makes sense to compare it to actual games with similar subscription models. In my experience a 100% bug free game is quite impossible. For those kind of games where people have to pay for a duration, bugfixes should happen fast. Or people will react and leave. Yet it is understandable that nothing can be fixed overnight and stuff has to be tested, so the story does not repeat. Rushed updates can also be bad. So l hope the next one will be tested well.

I will and I understand … i’m from IT sector so I know it all.

But here is no visibility about release date (I haven’t noticed any useful post) - and I’m in age where time is more important than anything else.

At least I will try Rouvy so I can compare later