I don’t really care one way or the other but I noticed a streamer in one of today’s ZRL races using the sauce for zwift addon. It’s super cool and I kinda want to use it but it’s almost too cool. I always disliked how hard it is to see information about riders in a breakaway group, what their current W/kg is, etc. but that just becomes part of the game. Everyone is on a level playing field. I’m pretty sure that in other competitive multiplayer games there are specific rules (and anti-cheat features) preventing people from running third party helper apps like this. So my question is: is this against any rules? I know people have gotten bans for “exploiting” various bugs in the game but I’m not sure about data overlays?

Obviously if someone is using it just for riding around, doing workouts, etc that should be fine no reason to care about that. Not sure if it’s frowned upon to use in races though? 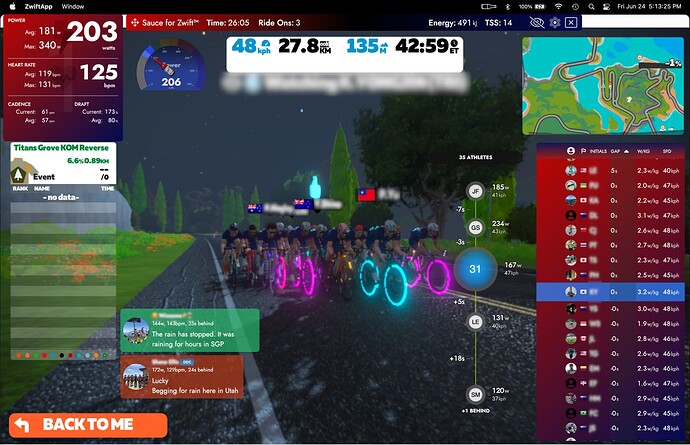 I don’t know if it’s cheating but my word, it looks so much better than Zwift.

Something that tells you how much draft you have.

Is that an indicator of how far ahead the next group is too? Just the other day I was just thinking how much better Zwift would be with something like that instead of the useless rider list.

And fixed width numbers in the font too!

Please Zwift, look at this and learn something.

Interesting cadence figures IMO… but what do I know…

It’s all data available from Zwift, just organized in a way better way than their existing UI. And it’s almost no different than what a DS will basically do for you in a race.

You should be more concerned about manipulation of power and weight than about this (but we can’t question those because inclusivity except PD which it somehow doesn’t apply to).

Pretty sure it’ll be against ToS for Zwift for accessing data streams in an unauthorised way. Good that someone is showing what can be achieved though. 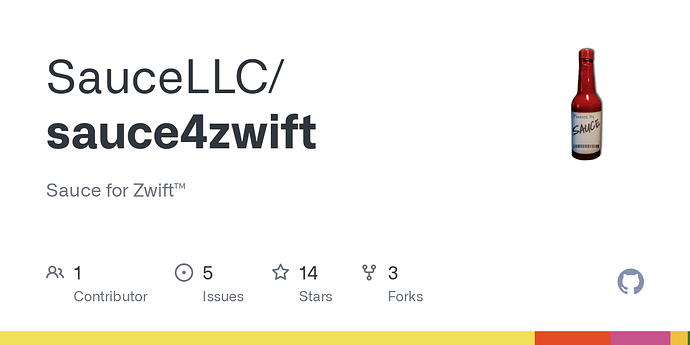 Sauce for Zwift™. Contribute to SauceLLC/sauce4zwift development by creating an account on GitHub.

I wonder how processor-intensive the added data overlay is.

I can see the merit in Zwift HQ keeping this off the platform if having it would grind a potato to a halt (phones, tablets, AppleTV).

If it’s not CPU/GPU intensive, it’d be nice to have a built-in, optional “race HUD” setting that integrated cleanly.

About the only gripe with what I’m seeing is it’s a bit messy. Some elements are really nice, like the vertical tape with “35 athletes” at the top - that’s right out of a business jet glass cockpit.

I wonder how processor-intensive the added data overlay is.

I just brought up task manager with it running. Zwift itself was using 20-25% CPU, Sauce was using 3-4% CPU

Never heard of Sauce for Zwift before and as I run the game on Apple TV I won’t be able to get it. It does look bloody impressive though. Hopefully the folks at Zwift will take some of the features onboard for future updates to the HUD.

I remember seeing people discuss whether bike computers should be banned from the tour de france because people thought that was cheating so i guess it is kinda the same idea.

I don’t see an issue with it, just shows a lot of stuff you could get using a bike computer alongside the game.

I’d be in favour of no head units in the tour but for amateur level it’s unenforceable. Although i would maybe like to see zwift engage more with third party developers and take on some more ideas.

The whole HUD experience could be improved to allow it to be customised and fix the awful elevation graph thing.

Not really concerned about it being cheating, you can have every piece of data and still perform poorly. I just find it cluttered and unnecessary. I dont need an add-on to tell me i’m about to get dropped

It can’t really be cheating as access to the data is what effectively started Zwift Power and WTRL races.

It would maybe be against the spirit of a No HUD race though.
You can build some really useful tools for TTTs with access to the data.

You can also have types of races not possible in standard zwift - like elimination races - using this kind of data access.

IMHO Zwift should engage with devs a bit more, we have plenty we could add.

I’d like to see banning of 2-way radios in the tour if I was going to choose.

similar i think it would make racing quite a bit more interesting if everyone was not riding to power and instant updates from DS.

I could go either way with this. It could just be a matter of the race type set out by the organizer. I love a good hudless race, it’s definitely a different kind of race than the usual scratch we’re used to. You have to do a little work ahead of time to know the course and distance, and keep track of your laps. BUT races with all the data available are fun too, just in a different way, and no less valid. Some of the best innovations come from people thinking outside the box, filling a void we didn’t know was there. I’m all for people getting creative with Zwift, it’s what drives the evolution, keeps things from getting stagnant. Generally improvements will get picked up by the community while not so good things get left behind…EG the Boost Races we saw a while back… generally didn’t catch on.

No more of a cheat than using a better power meter, a better trainer, a rocker plate, a bigger screen, a PC instead of an Apple TV, noticing that your Garmin computer is showing data that is useful, Discord to talk to your teammates or race director, drinking Gatorade instead of h2O,