I have had a bug for about the last 12 months where my Zwift loses time during a ride compared to a clock or the running stopwatch on my Garmin. Typically this loss runs to about 5 minutes in an hour ride (I.e., my Zwift will show 55 minutes and equivalent distance while my Garmin witl show 1:00:00). My Apple TV is hardwired so latency should not be the issue (it also occurs when on wireless). Has anyone else seen this issue and/or come across a fix? Thanks.

Does the time on the AppleTV (the OS, not Zwift) also drift?

I also use Apple TV. I haven’t checked the time synch before but just did for a ride last night. All are within seconds of the other.

It does not appear to, also my wife uses the same TV for Peloton workouts and those stream without any noticeable issues.

I have had this on slower android devices, but only ever lose about 10 seconds over and hour.
Do you notice the game stuttering? this slows the clock down and you lose time this way.

It is most noticeable if you’re doing a workout because the workout timer doesn’t slow down but the main timer does.

It’s an AppleTV HD (4th gen) so i wouldn’t think it’s a Hw issue unless Zwift has pushed through some major process intensive updates. I do not notice it stuttering, haven’t done a Zwift workout to see this, but I have noticed it one time in a segment counter that the counter showed more time elapsed than main clock.

I may try a workout to see if that helps recreate the issue.

This is data for yesterday’s Zwift RoboPacer ride using the ATV app.

That looks like you spent time faffing around before and/or after the ride which makes your time/elapsed time longer by 3min.

On the Garmin, is it in indoor mode (i.e, the GPS disabled?) Curious as to why you have “moving time”. Maybe you also paired/record speed? I don’t pair speed. So, I don’t have distance in Garmin or moving time, only time and elapsed time which are always the same.

That’s odd your moving time in Garmin would be greater than your elapsed time. Should be the other way around.

I just looked through a bunch of my Zwift rides (Apple TV) on Garmin Connect and all of them are the same pattern:

Most of these were Robopacer rides, none were events.

So, thinking through some of the other comments, I dug into two files from a ride a while back where I uploaded both Zwift and the watch directly into Garmin Connect. As you can see here, two entries for the same ride:

image952×326 25.8 KB
As you can see from the Garmin watch file, it was on Indoor mode so there was only Time and Time Elapsed, no moving time, and they both match (also note the 6.12am start time). 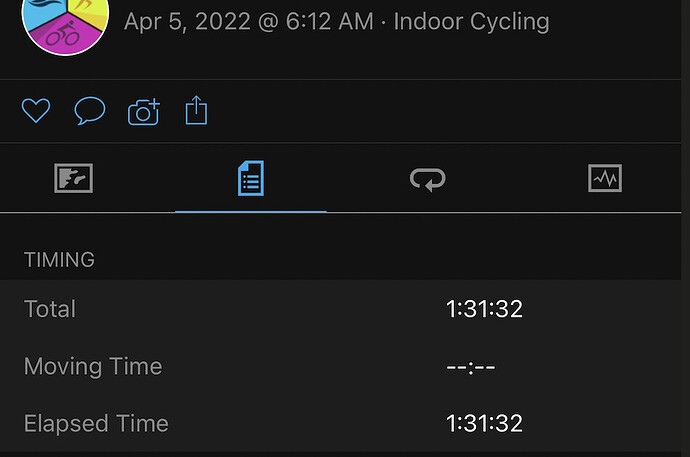 image950×630 50 KB
Additionally, from the power chart you can see there was no break or drop off in the duration of the ride 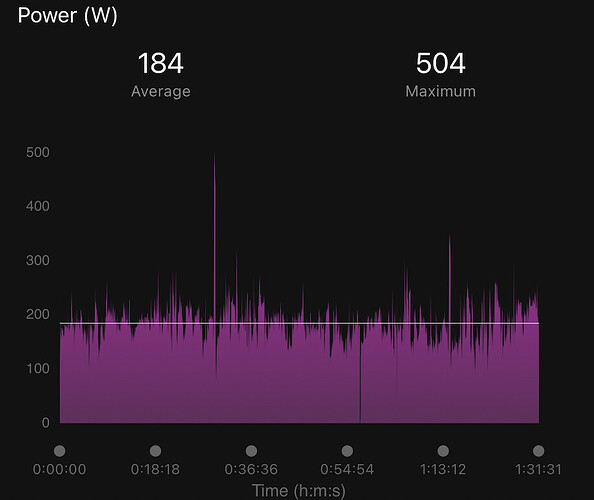 image918×772 59.5 KB
Next on the Zwift file you can see the same 6.12am start time, but now we see Elapsed time actually matches the Garmin, but moving time (and the time reflected as “total” and in the charts) is significantly shorter. 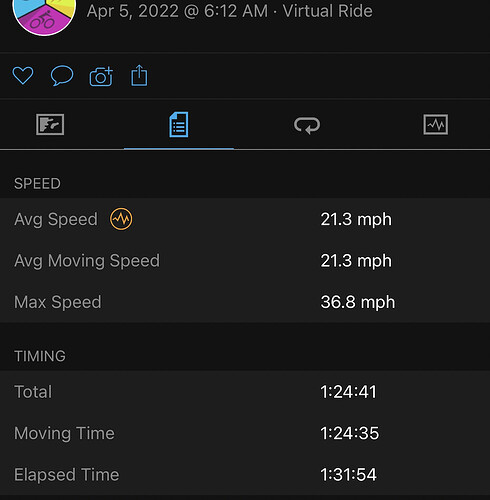 image932×950 73.6 KB
And you can see the same in the time/power charts as they now are compressed to only show the moving time without showing where the other 7 minutes went … but the average power number matches, so somehow power was tracked correctly and didn’t just have 7 minutes of zeros (and they are pulling from two different power meters as well). 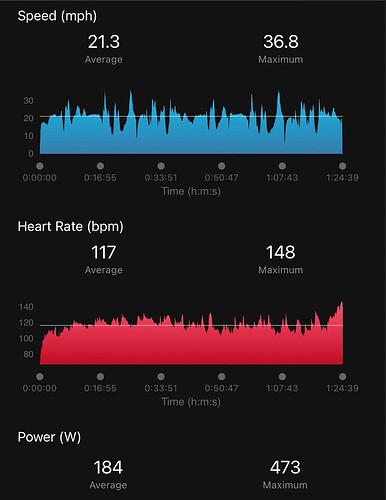 As you can see, this is definitely not me just hanging out somewhere during the ride, nor is there a clear break in the files anywhere. Appreciate if folks are as stumped as I am, but if anyone else has seen/corrected for this that would be awesome.

Mmmm, don’t know the answer to this.

The Garmin times are simply the Zwift/Strava data auto-transferred via Garmin Connect. They are not times measured independently e.g. on a Garmin Edge.

Were you in a big group ride or was it very crowded when you were riding. That’s when I lose most time on android, never seen 6 or 7 minutes though.

Having used Garmin while Zwifting, extensively, the above is a relevant example: Garmin and Zwift are logging different things.

Enabling “auto pause when stopped” on a Garmin device will tend to make elapsed and moving time close or identical, and a fairly close match to Zwift. Still: Garmin will often continue to log distance as your trainer “spins down” where Zwift will have stopped (and paused the Zwift ride timer) since you aren’t producing Watts. That’s just one example of how they’ll differ.

TL;DR: there are a LOT of ways these numbers can differ and none of them are “bugs”.