ZRL SBP system - should there be a cut-off time for submitting teams?

Sorry if I have missed that this has been discussed elsewhere.

What are your thoughts on the ZRL SBP system?

I like the idea, but think that it would be good if WTRL introduced a cut-off time for submitting teams, and have a penalty points system in place if a team puts through a swap after that cut-off time.

I think that people will get pretty disheartened if they think that they are competing against riders of a similar ability to them, only to see that change at the last minute.

Will these instances be rare or is it something that might impact the enjoyment of this new points scoring feature for lots of riders?

I think that is a horrible idea and was my main concern with them doing this that they might introduce a cut off.

Teams always require late swaps with most of us rushing to finish work before a race i’d hate to be in a position to lose a race simply because a rider was unable to signup.

From what WTRL say the system will be real time so the SBP groups will be updated on WTRL website when the race is running.

I don’t think there needs to be a cut off time, but there does need to be clear visible way to identify who is in your competition group once the race starts.

Right now WTRL site says this:
“You’ll need your wits about you to figure out who your rivals are to beat them.”

Right now I am on the disabled list and unable ride with my team, so I am planning to DS the mid and back section of the race for those whose SBP groups may have dropped off the front so they know who their competition is and where they are. (It’s hard for a racer to keep checking the updated SBP groups list as it auto updates and remember the names of six to eight of folks they just learned right before the race. Ideally they should be focused on their warmup and normal race prep.) Even with me attempting to do this, I think it will still be hard to manage and to the main tactic will just be to push as hard as you can in all segments. Will be interesting to see how it goes.

This whole system seems like way way way too much work for what accomplishes very little or nothing to make the race more interesting (compared to straight-up points for every position, anyway). I guess the real tactically interesting choice is if you put your best riders at the top or the bottom of the list.

When it comes to sprinting in a dense pack, it is basically impossible to identify and keep track of the individuals you are racing against no matter what, and even more so for a DS to do the same for a whole team at a time. And if your rivals are way up or down the road, there’s nothing to sprint for. So the only situation where this would actually potentially change racer behaviour in a meaningful way would be a situation where the pack is stretched out in a single file so you can actually see how you are positioned against typically one or max two your rivals and sprint (or not) accordingly.

I guess one could use the favourite function to make one’s rivals stand out a bit more on the minimap, at least if you are not using it for anything else (and you are both following each other or whatever it requires to use the thing in the first place).

WTRL decide who is top and bottom of the list using their secret metrics which i’m sure after race 1 there will be a few complaints why rider x was grouped with rider y and not lower/higher etc.

This whole system seems like way way way too much work for what accomplishes very little or nothing to make the race more interesting (compared to straight-up points for every position, anyway). I guess the real tactically interesting choice is if you put your best riders at the top or the bottom of the list.

WTRL will rank the riders… Not sure on what metric they will use to rank them.

They say there will be a web page & overlay available to support identifying your groups.

Agree with much of this. As a result I will only be focusing on dropped riders from my team. I will try to let them know if there are other riders in their group who were also dropped and are nearby. If yes, sprint. If no, no change or wasted effort required.

Oh, ok, I thought the order was simply the team joining order and would stay constant for the duration of a season. (I do try to maintain an appropriate amount of ignorance about WTRL matters for health reasons.)

They say there will be a web page & overlay available to support identifying your groups.

Hoping this will prove to be true. Not going to bank on it, or that it will work well straight out the gate.

And if your rivals are way up or down the road, there’s nothing to sprint for.

Yeah, I think they should have used FTS for these instead of FAL…

Yeah, I think they should have used FTS for these instead of FAL…

LOL, I guess… but it would give you something to sprint for. If you somehow know that one of your SBP rivals is up the road with the front group then you have less to fight for. Ultimately I still think this will favor the pointy end of the race and those riders already getting FAL points will just get more SBP’s, but we shall see next week.

This is a right can of worms.

i read through a whole ton of FB posts and from what i can tell, riders will be ranked on their historical segment performance in previous zrl races. while i think the idea is fundamentally overcomplicated, that would probably be the most least complicated way to do it fairly

i don’t have the appropriate PHD to think about it with any more depth than that. my condolences to everyone who manages a team

As captain of a D team that was at the bottom of the list in Americas West last round and will be at or near the bottom in Americas East this time (we’re new in 2022-23 and the West time wasn’t the best for either our Pacific folks or me on Eastern), that was my take on it as well. There may be occasions where we can pick up 2-3 extra points here or there, but I can’t imagine this will be a net gain for us, and since we struggled even to find 4 per race (we had to skip both TTTs) even if we get that fixed, this is more likely to help our opponents - depending on how it’s scored (it wasn’t clear to me), teams that can roll out 6 per race will get some (or a lot of) insurance points from this.

I appreciate what I think they were trying to do here, but I don’t think it’s going to do what they wanted.

Yeah teams that can’t field 6 riders will be even more out of points.

Still time to recruit a bit more generally about 8-10 rides on a squad it a good number to start with.

(un)lucky you, some of us team captains can’t even level the playing field by informing our teams of the rules because we are still sulk banned from WTRL FB.

don’t worry, i’ve got you. i sent this screenshot to my zrl team clarifying the position 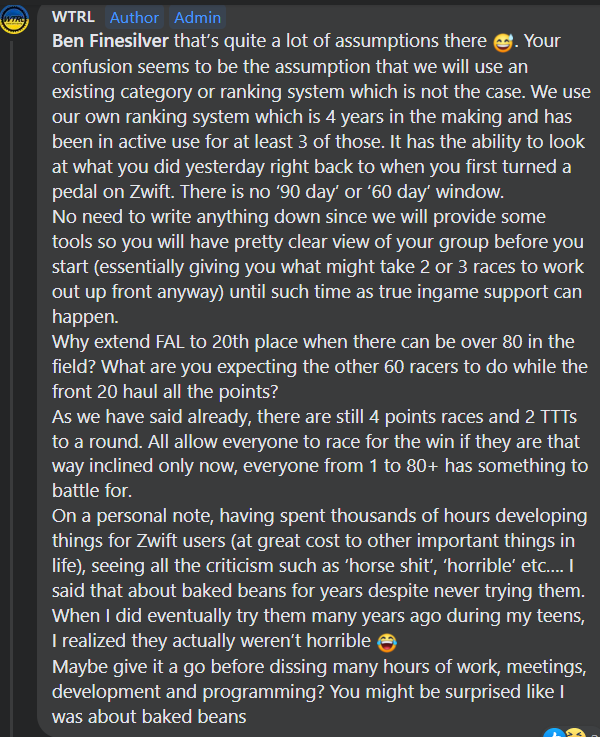 the ranking system is, as far as i can tell, loosely based on the concept of baked beans. hopefully this answers any questions

the ranking system is, as far as i can tell, loosely based on the concept of baked beans. hopefully this answers any questions

I think it’s a daft concept to be honest