Would this build run Zwift well?

Probably the shipping fees from the eBay sellers, which was included in my price. Think those were around $35ish.

Side note: what do you mean when you say clean install Windows offline onto the SSD? I’ve never moved from HDD to SSD before, so that bit is a little foreign. I’ve only installed straight to SSD.

As in just immediately pull the HDD out, put the SSD in, and install Windows 10 onto it with a bootable USB stick. Do it all disconnected from the internet (literally click to say ‘I don’t have internet’) so you don’t have to mess about with a Microsoft account.

Got everything set up today. Selected Ultra settings and rode around New York for 20 minutes. Ran a lot smoother and definitely better graphics than my Surface Pro.

When idle or just free wheeling in the game, I get approx 100-120FPS but when in race or when very crowdy it goes down to 30-40 FPS, with GPU load less than 60% and CPU load approx 50%. Even when FPS drops to very low numbers, both GPU and CPU just seems to not work very hard.
I use MSI Afterburner to monitor GPU/CPU in-game

I have tweaked my NVIDIA settings from a pure FPS game perspective with all settings set to favour performance before appearance. I have also modified the ULTRA.inf to turn OFF some of the graphics to improve FPS

Any idea how I can push the GPU/CPU to work a little harder to get a bit better FPS when in busy zwift race? or is my hardware to weak?

When it’s busy you’re CPU bound. Literally nothing you can do, that’s just how Zwift works. You can’t upgrade CPU because it’s a laptop.

PS: turning vsync off is daft, you’re just introducing constant screen tearing for no reason. And if it’s a 60Hz TV you’re just burning energy pointlessly any time the frame rate is over 60fps anyway.

CPU is the bottleneck yes, but I would expect to see the CPU more busy than now. Seems it’s just idling.

I have no issues with tearing, rubberbanding or any other visual defects.

I would expect to see the CPU more busy

If you’re using Task Manager to view load then the utilisation figures are meaningless; Zwift doesn’t come close to using the full resources available so it’ll never show 100% even though you’re CPU limited. Your older system is getting worked more so the figures are higher, but the same principle applies.

With vsync off you have constant screen tearing. Whether you’re bothered by or notice it doesn’t change the fact that it’s there.

Likewise outputting 100 frames per second to a display that can only show 60 frames in a second. Total waste of energy, but as you wish.

Do you think updating my desktop from CPU i5-6600K to i7-7700K would make a noticeable improvement or just waste of time/money? If I also steal my sons GTX 1080TI

My target is 4K on ULTRA with steady 60 FPS during busy periods.

dunno about the CPU but the graphics card will certainly handle ultra. i think an i5-6600 is fine as it is. but dave knows way more than me

I’m trying to find a way to get 60 FPS, during busy zwift races with many racers. Is there anyone who have such a system that can handle 4K on ULTRA in stable 60 FPS when it’s busy (during the worst conditions)? What’s your HW specs?

probably a cpu upgrade is the only way then. i am personally using a 1050ti and an i5 4th gen or something which is about as basic as it gets and getting a fairly stable 60fps in ultra but I am only running zwift at 1440p

except in makuri. it runs like ■■■■ in makuri. i dont think any reasonably priced hardware is solving that though, it’s a zwift issue

I’m trying to find a way to get 60 FPS, during busy zwift races with many racers.

12th gen Intel is the answer. The i3-12100F is £100 and better at Zwift than flagship i7 and i9 CPUs from previous generations costing £500+. If you want constant 60fps in CPU bound circumstances, don’t even bother with anything else - including wasting money on an i5 etc.

That will be next project!

A GTX 1060 6GB is strong enough to hold 60fps in 4K in most places, though not in dense foliage so in the Watopia jungle, Titans Grove, parts of New York and loads of Yumezi, you’ll be GPU limited. But with a 12100F you’ll basically never be CPU limited again with 60fps as the target. As pointed out above, Makuri Islands on the latest game update is running more poorly than it has since version 1.24.x in April (it’s always been significantly more CPU bound than the other worlds) but that aside my system typically doesn’t drop below 80fps no matter how busy it is. This is vsync capped at 95fps: 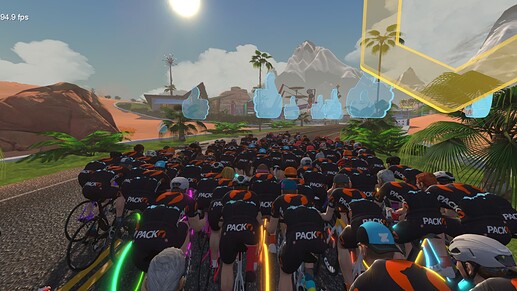