Wondering if running two Apple TV’s, two TVs, two separate trainers (ones a Tacx, the other Wahoo is the best way to ride together, has anyone tried this. I can’t find any thread where someone’s tried this. I can’t see any reason what this wouldn’t work? Or am I missing something?

I can’t speak for ATV but we run two windows PC’s next to each other.

and 2 Zwift memberships of course. Should work fine.

I am certain DCRainmaker has two AppleTVs set up in his paincave: 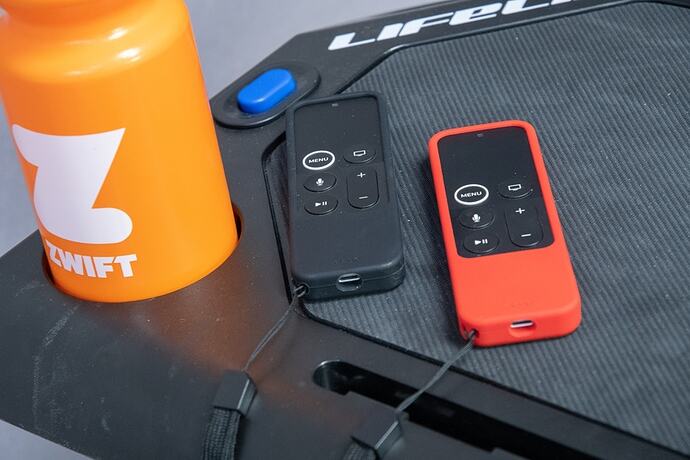 If there’s anything I’ve learned in the last few years, it’s that y’all really like hearing about my favorite inexpensive accessories. Be it the $8 Garmin charging pucks or the indoor cycling desk that’s half the price of Wahoo’s –

…as evidenced by the video in the above-linked article.

He and his wife ride side by side and he’s stated that he Zwifts on ATV most of the time for the sheer ease-of-use. I only have one ATV but I’m right with him on the ease-of-use.

Out of curiosity how difficult to use do people find other devices?

I have used many many desktops, laptops, windows tablets, android tablets and android phones and have found all of them as easy as each other.

We used a MacBook and it also dropped the connection. We have up and switched to AppleTV. Haven’t had a problem since

I’ve used “all the platforms” at this point for Zwift - Android smartphones, iPhone, iPad, Windows PC, and AppleTV, going back to 2018. Most of my rides now are on an Apple TV.

Single button switches everything on. 15 seconds or so and you’re riding. Easy.

I’m not saying Zwift on a PC is difficult - I simply prefer the reduced friction of hopping on and going, no keyboard and mouse to manage. Gen 2 Siri remote fixes a tonne of complaints from the Gen 1 by having physical directional buttons for menu navigation.

Also, despite the “game” graphics (riders, world) being locked to 1080P/30 on the ATV, the menus and HUD are rendered in 4K so it’s easy to read.

I think a lot of the friction you experience is because you’re using a laptop, irrespective of the graphics etc. That’s always going to feel like a faff to set up when compared to a static, dedicated device which is sat in place ready to go with a single button press. I did it originally too. It’s one of many reasons why a dedicated desktop is far better than a laptop for Zwift. That single button startup experience is exactly what I have, it’s not unique to Apple TV.

no keyboard and mouse

This is one of the top reasons why I use a PC. Different strokes they say.

Just responding in that, as noted above in the linked post, yup, I use two Apple TV’s side by side on two TV’s with two trainers/bikes. Zero issues.

Works great. The only minor thing is that the Apple TV remote, when changing volume, will change it on both TV’s in most cases if you point it at one. However, if you just put your hand on one side of the remote and kinda shield it, you can change one and not the other.