Single Zwift ride and my trainer led keeps blinking since

Hello,
I decided to try out Zwift. And just after a single ride my trainer has started to blinking blue/green even when not in use. I suppose that its waiting to be connected, but point is, that it NEVER did before and I have been using many other apps - TrainerRoad, Rouvy, Fulgaz … for years.
Its very annoying as its in my kids room. I could plug it on during the night, but I never had to do it before. A single ride on Zwift causes this.
I tried to power it off and on again, but no help.
My setup, win 10, Elite Rampa, Assioma duo. Zwift is connected to all devices via ant+, only OH1 is connected via bluetooth.
thank you for help 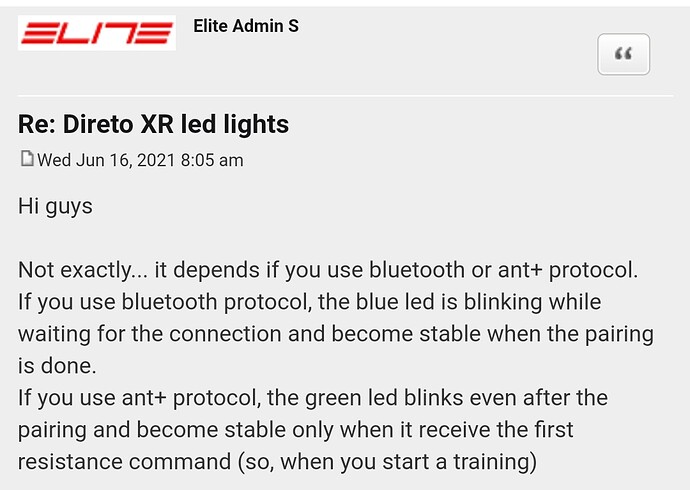 That’s from a Direto but I checked the Rampa manual and it’s the same principle. You should turn it off when not in use.

I know, that it is waiting for connection, but I have this trainer for a few years, used many indoor cycling apps (once Zwift included too), but led ALWAYS turned off after I finished riding. I did just a short Zwift ride yesterday and since that, this issue appeared and led keeps blinking.
Yes, I could plug it off, but why would I needed, if it was not ever needed (before zwift use)?

Have you updated the firmware recently? Maybe it’s a design choice to remind the owner that it’s powered on and seeking a connection, which wouldn’t be unreasonable. Other than that, no idea.

It starts blinking and never stops? My H3 will blink when not connected, but eventually goes to sleep and stops. Maybe a couple of minutes. Yours blinks all the time? Without anyone touching it? (If it does have a sleep mode, turning the cranks will wake it up again).

Switch it off and help save the planet.

Mine trainer was the same as Tom_J wrote : when I woke it up, It started to blink and and lit when connected. After finishing ride it went to sleep with LED off. Its strange, that connection to zwift changed something in its settings. After 2 days of blinking, I powered it off again for a few hours and then connected it only to Edge 1030 and looks like, that it helped this time.
Thank you all for help