Is there any rule against people entering categories below their ability and quitting before the end of the race?

One rider in the C cat Fusion Race yesterday evening (18:30GMT) ruined the race for a lot of people (nearly half quit) and quit about 2 mins before the finish of a nearly 90min race.

Looking at his Zwift power profile, he was winning B races in ZRL only a couple months ago but recently put on 5kg, and struggles to raise his HR about 140 average now, having averaged 160 when he was in B cat.

I checked his Strava profile and he enters a lot of races now but rarely finishes them. This is ruining the experience for others.

Before you say, join cat enforcement, I usually do but surely people like this can be penalised for their “trolling”

Also, he left his ftp on his ZP and it brings him out at 3.88wkg (even with his new weight)

Get 6 fellow racers and flag him out of the race

Under what category could he be flagged?

I would say generally it’s bad form for people to ride in a different cat than their own, even if they quit early or dangle off the back they’re still affecting the race. And if you’re not into racing hard or want to do an “easy race” then don’t race, join a pace partner or do a group ride with your friends… I’ve been guilty of this in the past but have had my mind changed by some convincing friends. I think the only way to flag people is with the companion app, I don’t recall it being available in the main Zwift screen, someone correct me if I’m wrong

I would just avoid doing any race unless it’s cat enforced or via private links to stop the sandbagging.

Sooner every race on zwift becomes cat enforced the better

Gordon, do you think CE is still as effective as when it was first introduced?

Just wondering if the changes that were made to align the CP20 metric with the ZP FTP metric are making it less effective at filtering out sandbaggers?

I’ve no data to suggest yay or nay, just genuinely interested in what people think/feel. I seem to remember that CE is still going to play some role in Zwift’s new points ranking cat system?

@William_Harrison1 i dont see A B rider’s in the D or C group no more. full on top level A top B doing 3.8w/kg+ in, C or the D group, think about what you just said.

no C or D getting killed by top level riders no more. there will allways be edge case out there.

FUSION races are CE as far as i know. no comment on whatever this guy may or may not be doing other than to say you can expect zwift to do ■■■■ all about it, and even if they did, their newest 500 IQ idea is to allow (or force, depending on your perspective…) people who aren’t registered on zwiftpower to record results and show up in the results table anyway

better to just flag him as sticky says

Not sure this was CE… Still, he’s definitely sanbagging, by quite some degree. He also seems to be a weight cheat.

It was only when the group started calling him out that he quit… Sad thing was, half the starters had quit the race on the first lap, complaining about the unrealistic pace.

My personal opinion is CE was a waste of time and resources without further development to it compared to what could of been done with ZP cats…
To start with it was great but without having custom cats and fixing the wattage floor issues it’s really not much better than ZP (other than obvious pen enforcement which is all we were wanting). Add to that the 100s of posts from riders wondering why they have been CE upgraded.

Looking back on what i assume was time spent developing CE power calculations ZHQ would of been far better giving us what everyone was expecting in pen enforcement based off ZP numbers. Then spent the extra resource time on enabling custom categories based on w/kg or any other number of metrics.

it’s a race I often like to do myself so i’m fairly certain. i have been wrong about stuff i’ve been certain of before though. but there are many ways a person can mess with the CE system

Do you think the data overlays are being used to game the system by some of these people?

I’ll only be doing CE in future!

You’re right, apologies. I checked, it is cat enforced.

Well, this guy is definitely gaming the system, if it looks like he’s getting upgraded, he quits the race.

His Strava races definitely do not match his ZP races!! Many on Strava are missing off ZP. 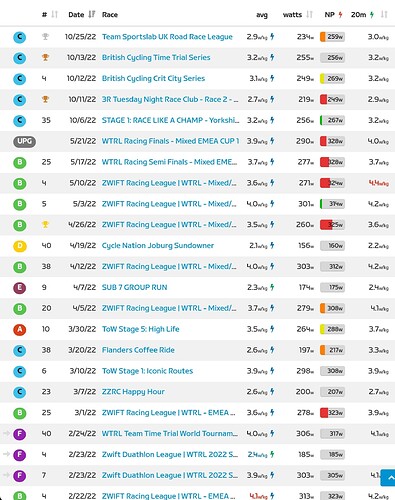 He was even UPG from a B cat race only a few months ago.

pretty common with riders returning after summer. ZP only looks at 90 days, CE only 60 days.

Some might genuinely have lost fitness the majority enjoy a brief spell taking easy wins until they upgrade. Look at ZRL and WTRL TTT races are probably the worst races for it.

I don’t really blame the rider. Zwift can and probably should fix it in my opinion.

hard to say since his zrl races were 5 months ago brother. if he is really tearing up CE races then it shouldn’t matter whether he finishes them or not though, they would still affect his CE category

does it if he quits them and not even save it to zwift history?