In my experience, a handcycle gets all but full draft off a conventional cyclist IRL. Just not the other way around due to our low profile. I do group rides in Zwift because I want to hang & chat with the group, who are obviously a lot stronger using their legs. If I’m not getting the same draft they are then I won’t use the handcycle in group rides which is disappointing as I’ve been waiting for this. It is already harder for a handcycle to hang with the group. I see no sense in making it harder. I thought Zwift’s motto was “make indoor training fun”. I guess this is why I see other handcycle users obviously fudging their weight on Zwift.

If I’m not getting the same draft they are then I won’t use the handcycle in group rides which is disappointing as I’ve been waiting for this. It is already harder for a handcycle to hang with the group. I see no sense in making it harder.

this was my thought too, I would rather see the handcyclists be part of the large group than be segregated into their own small groups/rides.

Let’s be inclusive, just make the handcycle similar to a middle of the road bike and get/give full draft.

I did all the required climbing in order to get the tron bike. Now all that work is voided & I’ll be going backwards. It is a shame.

It’s great to finally see this development! Is there a way to make the handcycles behave like an average bike just for events? I remember the havoc TT bikes used to cause in events before organizers could ban them.

I suppose it comes down to the feedback that the adaptive community gives.

So awesome to see this. Thanks for making it happen.

Since handcycles correlate with adaptive athletes, I’d like to quote a section of the resource megathread.

EDIT - I’m just catching up on the draft, weight, aero discussion. Perhaps Zwift will make some tweaks to those once they get some data on how the handcycles are being used.

I just tried a race on a handcycle (Stage 2: Get Rolling on Sand & Sequoias, cat B). I needed about 0.5 to 1.0 W/kg more than the riders around me to keep up at the start. After 5 minutes of pushing 3.8W/kg trying to stay in the draft, instead of the usual 3-3.2W/kg I can get away with on that course, I gave up and quit before I got near any hills.

From that brief experience I don’t feel the aero advantage of the handcycle is enough to overcome the reduced draft. I don’t think I could recommend that anyone uses the handcycle in a race as it seems to put you at a distinct disadvantage. It might be different if half the field was handcyles though. Anyone want to try that experiment?

EDIT: One other thing I noticed is the camera position. The default position puts the camera at head height of road cycles so you occassionally get to see the insides of other people’s heads. The second position seems to put you at crotch height.

@manda_F These look cool! I don’t ride a handcycle, but I just have one OCD tidbit to mention… shouldn’t the cranks be going in opposite directions? In all the pictures and the Zwift Insider videos the cranks are pointing the same way, but it seems like they should be opposite. At least, it seems a lot more efficient, especially on climbs. Same principle as having upright bikes’ cranks in opposite directions rather than one direction. On a steep climb, the circular motion of your arms/cranks would get stuck because it would be too hard to make a revolution(?).
Looking it up on google I get a lot of same-direction pictures, though.

That’s normal on handcycles. I had a service customer with a handcycle ask me to oppose the crankarms, and he quickly had me put it back because the pedals are used to steer the bike and he didn’t like how it handled with one arm forward and the other back.

There have been many studies on the effectiveness of riding handbikes. The result is that parallel cranking is the best. For many, many years, people have been riding this way.

I’ve ridden & raced at an elite level on a handcycle since 2007, retiring in 2018. I can’t imagine any serious or competitive cyclist, conventional or adaptive, would use a Zwift GROUP RIDE to enhance their IRL performance in races. Zwift is great for programmed workouts & solo riding to improve performance and having the handcycle avatar as close to real life on those rides is practical. However I, & I imagine most adaptive Zwift users, tend to use a GROUP RIDE for recovery/socialisation/fun/easy riding. As pointed
Out in Aoi’s test, the handcycle avatar is at a distinct disadvantage when in a group on Zwift. Why have Zwift made it twice as hard (50% draft) for handcycles. It is like a step forward and two steps back. GIVE THE HANDCYCLE AVATAR EQUAL DRAFT CAPABILITIES AS CONVENTIONAL BIKE AVATARS! This will not disadvantage the adaptive rider in what Zwift advertise as a way to “make indoor training fun”.

The introduction of a handcycle is a good start from Zwift; albeit long overdue. That said, a lot more adaptive riders use recumbent trikes (tadpole or delta) than ride handcycles. What about blind riders and their pilots on tandems. @Zwift when are we going to see these in game?

Draft is a major issue for hand cyclists trying to join a group ride. Our sub 2 last night had a hand cyclist doing 2.3 average and had to leave and change bikes after 20 minutes. A better solution could be to be able to toggle any bike in your garage to visually display as a hand bike (think April fools trike etc). Would just need a toggle button in the garage. Rider can choose best set up for their ride, then visually still be on a handbike, but with standard draft etc. Longer term the handbike displayed could include the selected wheels, Tron handbike, different handbikes based on aero and weight stars etc.

Yep, we know Chris. We’re looking into it.

I agree with Chris, we have a hand cyclist that we ride with in our group rides. He was so excited to have a more realistic avatar, and also we loved seeing the new hand cycle. That being said, it quickly became a problem, the watts he needed to push to just stay in the pack were to extreme. Zwift needs to rethink the hand cycle, it doesn’t need to be the same parameters as a real hand cycle. I am sure the Zwift concept isn’t the same as the “real” bike. 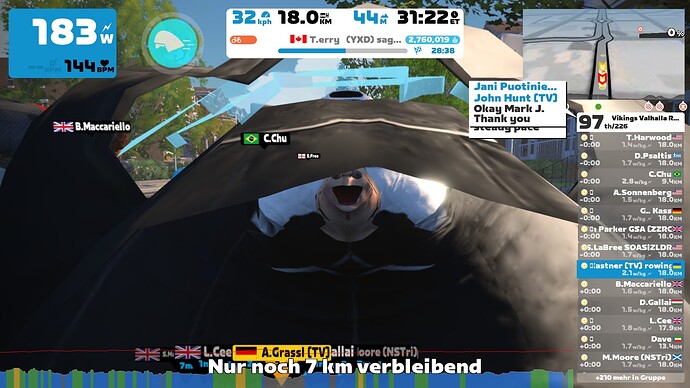 I´m not keen to use it again if it stays this way.

Looks like you’re in a fully faired recumbent HPV.

All About Zwift’s New Handcycle

How does the first Handcycle on Zwift perform?

Sounds like if a group of similar power riders all towards the top end of their pen all picked the handcycle for a super flat course race, they would stand a decent chance of winning from a breakaway against riders on slippery road bikes.