RoboPacers (fka Pace Partners) are automated riders to give you a draft or that critical lead out for your sprint or KOM personal best. These riders span multiple effort levels and are available on a daily schedule in Watopia and Makuri Islands.

I want to provide some feedback on the Pace Partners feature.

Overall these are a great addition and really like them. It’s fun riding with a group and like that they are always there so you can just join. So far I have ridden with As and Bs.

Few thoughts - the Pace Partners really show the limitation of the ride start UI and the fact that you can’t choose a bike as you go into Zwift. I am using an Apple TV do my log in experience is as follows.

And then you are in.

This whole process on the Apple TV with the absolutely crap remote and utter lack of support in Zwift for the old standard one with buttons means this whole process can take 10-15 mins which is really not what you want when you just want to get on and ride.

Next - can we pick some other routes. Road to Ruins and Sand and Sequoias are great routes, but it would be nice to mix it up more. What about simply swapping them?

Can we have all the pace partners every day? Why is it A/C and B/D?

Why not advertise the actual pace the partner is riding at? (A) is 4.2w/kg - in ERG mode - there is no variation. Why not just say that? And would it be possible to have more variation?

Overall I love this feature and with some small tweaks it could be so awesome. Thanks for developing it.

This feature has amazing potential, but maybe I’m missing something. I’ve tried Coco and Dan. My threshold is 208 watts, so Dan is really just a casual ride for me (average watts were 150 but huge variability even on a mostly flat course). I couldn’t even stay with Coco and the pack at 300 watts on flat, so threw in the towel after 5 minutes. I have to assume there are loads of riders in the 180-250 watts range that would love to have a pacer.

Pace Partners are terrific. Although I still find the apparent radical speed and power changes I must employ to stay within a few meters of the pace partners to be unexplainable, and initially annoying, I’ve come to believe that pairing with the 'bots encourages beneficial habits of concentration as well as likely creating positive physiological adaptations… Time flies too!

Also, the Zwift “Stay with pace partner” prompt is VERY confusing. Why? Because when one moves ahead of the 'bot, the icons still depict the 'bot AHEAD of the rider. In this image, I am in front of Coco Cadence, but the tactical image shows the REVERSE! I often find myself accelerating to keep pace, and end up running too far ahead (and dropping the group) as a result. It would be easy to reverse the position of the tactical icons: if I’m ahead of the 'bot, then the pacer icon (the clock with chevron) should show ASTERN (behind) the rider, and vice-versa. The rider would then know exactly what corrective action to take… slowing or pushing more power to fall back in line. 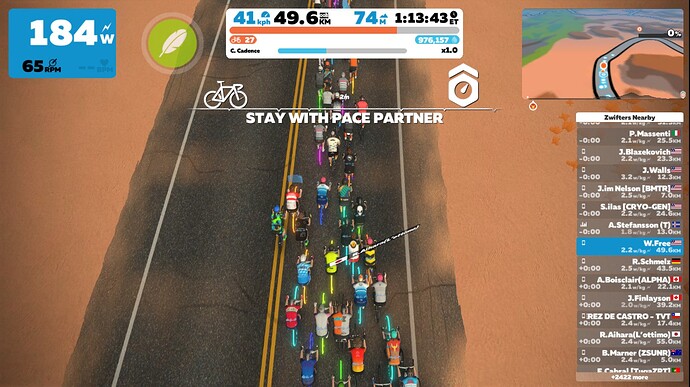 Also, today, a group ride joined the Pace Partner. The red icon in the map is NOT the pace partner, but rather a group lead. Having a clear pacer 'bot indicator on screen to show relative position of the rider to the 'bot is essential to staying in the peloton.

Enhancement request: if a rider gets dropped by the pace partner peloton for any reason (call of nature, phone call, replace a bidon etc.), a rider, upon resumption of pedalling should be given the option to rejoin the pace partner initially chosen, and not have to quit the ride, leave the game, post stats, and restart. Major shortcoming. If a rider can be given the choice to resume riding in the start-up world after joining a group (such as is available now), then a rider should be able to stay in the SAME world and rejoin the pacer 'bot at any time…

Lastly, Coco is blue. Her above-head indicator is a spinning blue “clock”. Ride-ons look confusingly similar to the Cadence 'bot indicator (they even spin in a similar manner). These similarities make discerning Coco from a rider with a ride-on falling quite difficult. These should be starkly different to avoid confusion. I generally cycle in EYE mode 9 (drone level) in order to overcome the difficulties I’ve described above. It’s most confusing with Coco as her color scheme is the same as ride ons…

Kudos to ZWIFT for the improvement to the Pace Partners’ relative position animation. I wholeheartedly compliment the Support and Development teams for making this crucial improvement. Nicely done!

Try choosing D. Diesel and use a Time-Trial bike. You’ll find that the suspension of the game physics caused by the TT bike will force you to ride at a higher pace to keep up with Dan the man. Once your fitness improves to the point where even this method is not too stressful, change back to a regular bike, and get back into the C. Cadence group. This is the best method I’ve found for varying the power demands within the Pace Partner experience.

Well - Zwift got it ALMOST RIGHT for the duration of the January update (1-0-61217). The Pace Partners began showing an improved relative proximity animation which
took my suggestions into account. The animation was improved to indicate when the PP was ahead or astern of the rider, the distance of that gap (in meters), and importantly: the rate of closure/opening. Unfortunately, this VERY helpful animation was de-emphasized to meaninglessness shortly thereafter with the recent pack dynamics AI change.

To my delight recently, when I joined the PP peloton and I saw this immediately displayed on my screen. PP C.Cadence, though advertised as running on Tick-Tock, was actually traversing the Hilly Route. The Pedal Assist had barely disappeared when I noticed the VERY welcome relative proximity animation back at its former prominence. I was thrilled! Unfortunately, these were all “glitches”, and momentarily, the screen froze (I kept my pace), the PP Peloton had dropped me, and I had to pedal at 150%FTP for a minute to catch up. I soon realized that the animation, too, was part of the glitch, and never reappeared. Was it a Future Works “experiment”? See below. 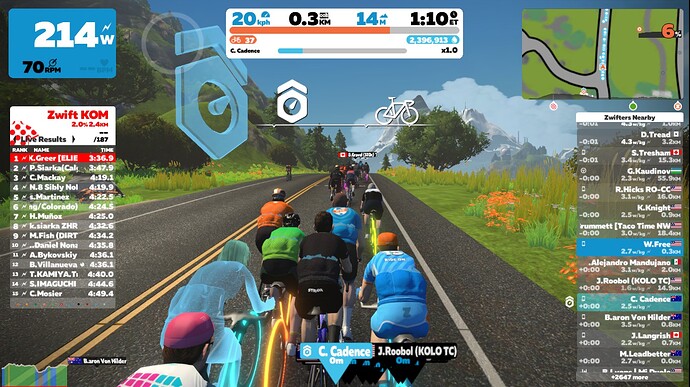 So, please, bring back the relative proximity animation released with the January update, and then altered/withdrawn with February. Any reasonable analysis of the PP feedback here in this forum, or the myriad other outlets, clearly indicate a need to answer many aspects of the same question: Where is the Pace Partner (ahead or astern)?; How far is the PP ahead or astern (in meters)?; and, What is the rate of closure of the gap between my position and the PP’s position (using the proximity animation).

Clearly, the Pace Partners are using the same “Close The Gap” drafting technology in use on a normal ride. The only difference is the gap is not defined by the rider in front, but rather the relative position of the PP to the user. Therefore, if a rider is within the Drops Zone (even if that drops zone is variable), the relative proximity animation (perhaps a bit smaller?) should be visible at all times, and in all views. As of the recent update, the animation only appears when it’s WAY too late to make small incremental changes to adjust one’s speed and power to that of the PP. The relative proximity tactical animation is excellent (just like the “close the gap” animation) and WORKS very well!

I use Zwift with AppleTV, great interface, never any problems, BUT why are the current routes not updated for the PACE Partners?

The very nature of the “Future Works” features in Zwift are basically to make you a beta-tester. These sorts of little glitches have been present nearly continually since the Pace Partners were introduced last year, and have been even more common since October 2020, when Zwift began updating the entire ride experience (from user interface to PP behavior) almost every month. This can be frustrating. The recent update announced that the PPs would be traversing new courses, beginning each Monday. The home screen for Pace Partner Coco Cadence, for example, says that the C category PP is slated to be running “Tempus Fugit” route. But I just dropped into the game, and she was on the Hilly Route.

It’s part of the PP adventure. There’s always a new surprise. I’ve experienced dozens of these. They will probably continue for awhile - as you can see there is quite a lot of user feedback coming in to Zwift, both here, in other media, and via their post-ride user comment solicitations. 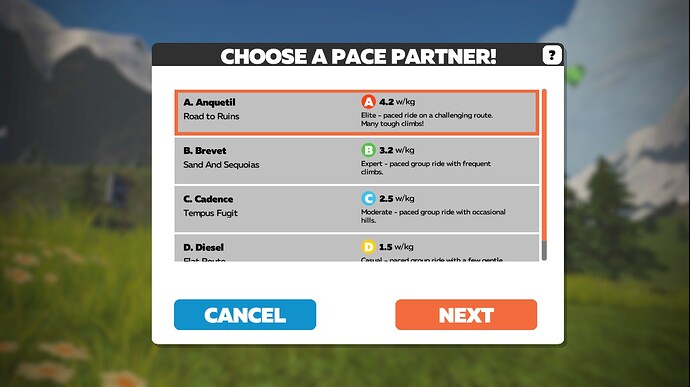 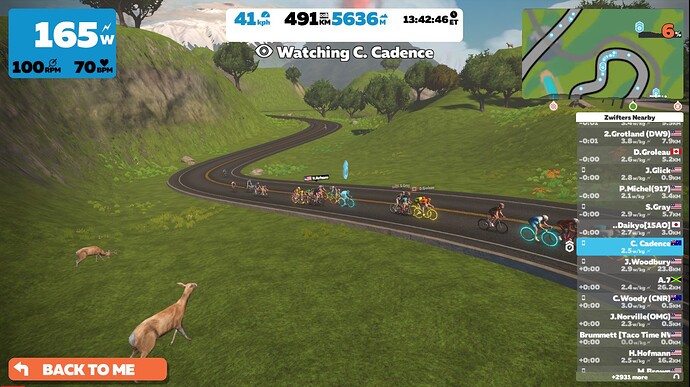 Thanks! But for Zwift this seems so BASIC, how hard can this possibly be. MUST BE VERY HARD!