Hello, have folks been encountering much more frequent network disconnects than usual? I have a pretty fast, hardwired network setup and during a two hour ride yesterday I had very frequent disconnects (screenshot from Zwiftalizer below).

Just trying to figure out if this is something related to my setup, if this is common/expected, or if this is a known issue. 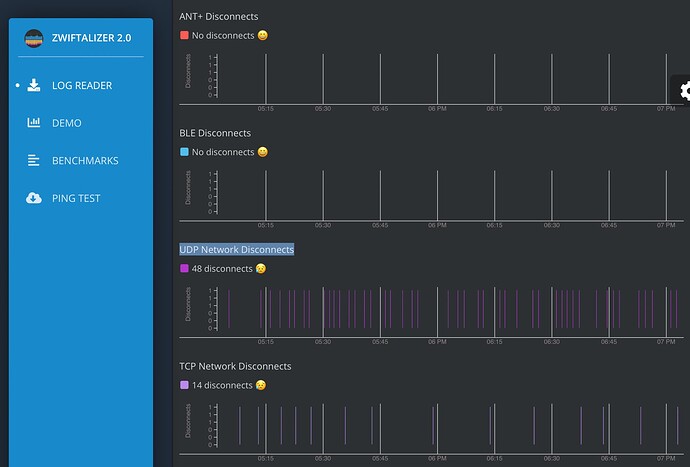 No that’s not normal

Did you try the ping test in Zwiftalizer.

Not during the ride no. Here’s how it looks now though, with my computer in the same setup:

Sorry I’m not a network guy.

Teddy, I would not worry in your place. UDP protocol, as it appears, is used by Zwift to send data about other riders to your computer. You may be getting several updates per second, but Zwift works fine even without these updates for up to 3 seconds. If it does not get UDP packets for 3 seconds or more, all other cyclists disappear and you are left riding alone. If you do not encounter any of this, you are fine. And even if other riders disappear, you can continue riding as usual - when UDP data starts streaming again, riders will re-appear. UDP is a one-way protocol without confirmation of receipt, so “UDP network disconnects” just means a lost in transit (or, possibly, delayed?) data packet… which is not critical at all because each next one supersedes the previous one.

I see a good amount of these lost UDP packets as well.

Andrei, thank you very much for this detailed reply! Very helpful and appreciated.

I got booted out of a ZRL TTT tonight. Any idea what’s going on below ?

I got booted out of a ZRL TTT tonight. Any idea what’s going on below ?

Some sort of network issue around that point where your latency goes ridiculously high.

Thanks - 3 kids with 2 on Xboxes playing on line concurrently ?! LOL. I have a MESH network but need to hardwire my Zwift PC by the sounds of it. I just stopped dead. It wasn’t like a lost the pack and kept moving

I update the thread cause i have the same problem and it is …a problem cause every time i have an udp disconnection every other zwifter disappears for about 4/5 seconds.

I’m using a smartphone connection, no plan B until 2023 unfortunatelly, but i have to say that i m using this connection since 2021 without problems. In the last few months this issues as appeared.

The connection is very good, no other devices in the lan, no other wifi near me. No problems with other games or streaming.