Yet people do a couple of 8 mins efforts and are happy to equate that to their hour power.

Its all an estimation, FTP, CP etc.

Race efforts are rarely full bore for their entire length, so hard to say that is the best they could have done for that specific time frame. iTT efforts might be a lot closer, but people dont tend to like doing them as (surprise, surprise) they often get upgraded post TT

So, after having just done another A race, I was dropped after 18 mins. Last by 1min 40 something. Av 3.7w/kg. Your analysis of me holding 4 w/kg for an hour is poor. Don’t just try to justify your algorithm. It is clearly incorrect.

If you were dropped after 18 mins and then only lost 90 seconds to a 35 man group in the following 10 mins that is a herculean effort on your behalf (or zwift have fixed the drafting model).

There were 2 finishers behind you… well done your improving already

You are at the bottom of your category, its going to suck for a while… You cant always be at the top… Until we get a better system, there are limited options available…

It can push your curve, and therefore your estimated CP, up of course.

It’s annoying that VO2 was ever mentioned. It’s nonsense and is a simplification that isn’t needed. It’s just obfuscating the calculation.

It doesn’t do anything at all about ‘an hour’. It calculates your critical power. That is not time-constrained.

I wish people would do a bit of research before jumping to conclusions. Hell, it’s explained in the OP and the attachment in the OP, even if the boundaries are now different. At the bare minimum give it a Google. (I am agreeing with you by the way… making a wider point)

You are a victim of the static category system. You are at the bottom in every future race you enter, and that sucks balls.

Don’t confuse that with CE. The problem is static categories.

Isn’t CP supposed to be able to predict avg max power at any given time interval? The disconnect seems to be when it doesn’t show itself predicting very close to what’s occurred in the past for some riders.

Mind you, I took Miro on faith that 1hr power according to Cavill’s history and theoretical CP would calculate out to over 4wkg.

hi John. The root cause for the A upgrade is probably your relative low W’ value. As mentioned in posts above, any talks of CP should be in relations to W´ as well. My claim is that the formulars used are underestimating W’ thus “rasing” CP.

as “S A” have mentioned many times: an all out 3m effort is the best way to display you real W’ and thereby make the W’ curve steeper, which in turn will lower your CP.

the CP and W’ theroy is actually really good, but it was never intented to be used as a general tool to classify riders. And the tool is rather useless if no max efforts are present.

Isn’t CP supposed to be able to predict avg max power at any given time interval? The disconnect seems to be when it doesn’t show itself predicting very close to what’s occurred in the past for some riders.

Not really no. It shows a threshold, much in the same way as FTP does. The main difference is that it is calculated from shorter duration intervals rather than 20m, and that it has a 2nd dimension, which is anaerobic capacity (W’). In theory the combo of these paints a much broader picture of the rider’s power profile.

Correct, and also the W’ threshold needs to be low enough to promote those riders that are winning so often with huge short duration power, as if you don’t promote these riders you actually have the opposite effect because their CP is suppressed (either accurately if they have true longer duration efforts recorded, or incorrectly if they don’t).

they actually do calculate a specific value separate from W and CP though (i have no idea what method they use for that though, but the curve i understand very well), i think @Rich tripped it somehow and a staff member showed him the exact value (65.1?)

If I had to guess, and it would be a guess, I’d say they are using Hawley and Noakes with PPO at 6 minutes.

They do, but isn’t their idea of VO2 max just a proxy for the MAP value? It’s the same thing said in 2 different ways? (could be wrong and maybe they have added a 3rd dimension I didn’t know about)

Edit: apologies, I can see from the table linked above that they have indeed added a 3rd value! What is this supposed to achieve? And if it can be calculated from a single effort in watts, what have FirstBeat been doing for the last few years? 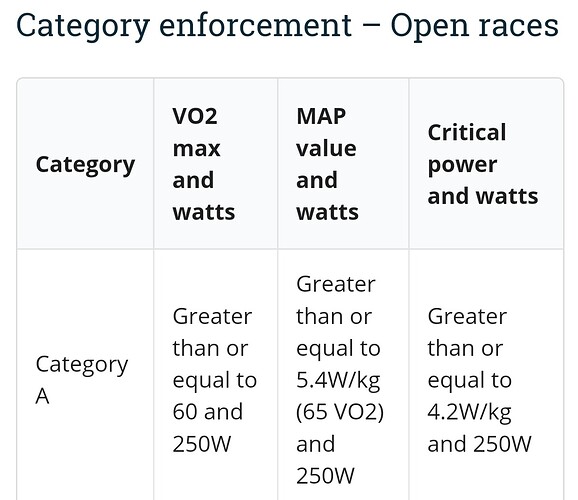 That article link should have the appropriate values on it now - I put the request through and spoke with our team. I’ll double check it for accuracy once more to make sure.

@xflintx I know you are busy with many things, in particular Race Scoring, but I wondered whether you have in fact had a chance to go back and check on the accuracy of the Category Enforcement FAQ chart values. Having different VO2Max figures in different columns is confusing.

Im going to presume the chart is accurate, as Flint has been tagged in multiple posts highlighting that it might be inaccurate over a number of weeks and it remans as is…

So the 65 VO2 is completely irrelevant?

I have no idea if its accurate or not, my presumption is, if made aware a live document is inaccurate people would remove or update it… Its not been removed.

Benefit of the doubt etc…

Though @Rich was advised he had been promoted due to a Vo2 of 65.1 in the other thread

It’s your VO2max going over 65

Further edit; @Rich Can you use that table & timestamp to look at the duration of the ZMAP value & ZFTP value