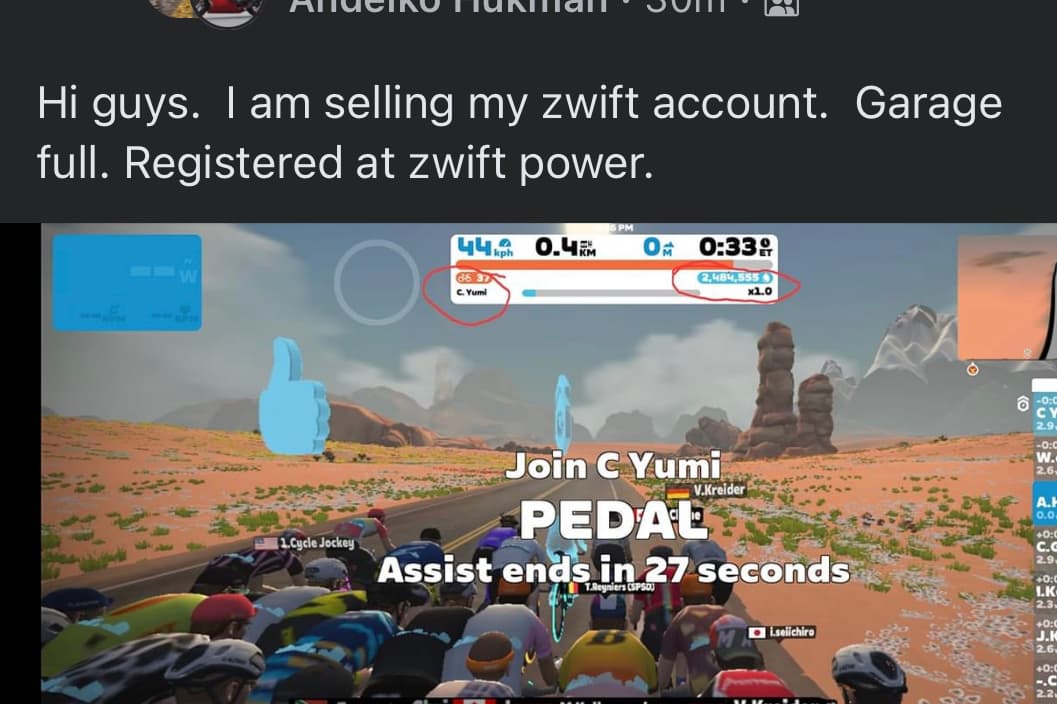 As seen on the Zwift Riders FB page…

I don’t doubt it, it happens in loads of games. Level up via botting and sell the account for profit.

It’s only at level 37 though so what’s the point?

The seller doesn’t have anything on his Strava profile…

There’s a thread floating around talking about bots people have seen lately. One account doing around 6w/kg for 800km straight (no variation in watts) that I encountered the other week. Selling seems a reasonable explanation for that behavior.

I mean, I reported that same user three different times, and nothing seems to have happened. So I feel okay speculating wildly

He’s still riding, so either he’s just waiting for it to sell, or he really did it for his own benefit.

The real question is “Are people really buying their Swift accounts”. It’s so easy to put anything up for sale that it’s no surprise someone’s trying.

I mean, I reported that same user three different times, and nothing seems to have happened. So I feel okay speculating wildly

It’s my impression that if you report something like this from the ZCA absolutely nothing happens…
Reporting using the contact form ( chat bot and reporting another user… ) on the homepage, those “riders” seems to disappear within a week.

But then again, money is money, and a lvl60 account will probably continue paying the monthly fee forever - just a thought

The real question is “Are people really buying their Swift accounts”. It’s so easy to put anything up for sale that it’s no surprise someone’s trying.

The second question is why does anyone care. It does not affect anyone else in any way.

The second question is why does anyone care. It does not affect anyone else in any way.

And the third question is: does this violate Zwift’s Term of Service?

An 800km ride at a steady 5.7w/kg up the Epic KOM certainly affects anyone else’s ability to get the Epic KOM that day. (Insert your claim that KQOM jerseys are meaningless anyway, which is beside the point that it affects other people’s rides even if you don’t value it)

Everyone else is already losing out to the usual KOM holders who weigh 50kg and ride at 10W/kg.

There are real human beings who ride unassisted 10w/kg up the Epic KQOM? That’s news to me.

The point is if you are complaining about people being “robbed” of their KOMs in Zwift then instead of being worried about a few bots building up their stats to sell to pathetic individuals, you should be complaining about the forty-year-olds who, judging by their Zwift climbing performance, should be winning the TdF instead of riding indoors in their basements next to their dogs.

Why do I have to choose which ones to complain about? Why would wanting to have one kind of cheating stopped mean I can’t also want the other cheating to be stopped?

My question for you is this: why should we ignore one kind of cheating just because another kind exists?

…same… Any rider, riding for hours with less than 2 watts variation should be pretty easy to spot using even the simplest algorithm

We can pick them pretty easily even while slogging away up the ADZ.

At least the guy with the beagle as his avatar image has gone, he used to do 500km+ rides at 3.8w/kg.

My question for you is this: why should we ignore one kind of cheating just because another kind exists?

A bot roaming around Zwift is “cheating” you? Or is it the dude who buys the account so he can have a level 30 jersey that is offending your sense of justice? Those are affecting your enjoyment and use of Zwift?

With Zwift you are talking about an company that cannot make the simplest of changes to the application despite the changes being requested for years and years, and you want them to waste resources on something as trivial as this?

Hikers say hike your own hike. Maybe when zwifting you should ride your own ride. You would be a lot happier than worrying someone may have bought an account with a route badge he didn’t earn.