I recently did the Amalgam workout as part of my current training plan.
There’s one tough section called “Shark Teeth” where you have to go well beyond your FTP with short pauses in between.

These pauses are thought to be at a very low wattage. However, in my run in ERG Mode, the power requirement remained as high as during the “Shark Teeth” sections.

I’ve also noticed severyl typos / wrong infos in the onscreen prompts during workouts. Is there any way to add proposals / corrections for this?

I did Amalgam three days ago (as part of the Build Me Up training program) and the power dropped down to 1 min @ 50% FTP between the three “shark teeth” intervals (where the power rises fm 105% FTP to 115%, then back down, over the course of two minutes) near the end of the workout just fine for me. You mentioned in your post that you experienced this during your “run in ERG Mode”, so maybe you’re talking about a running (treadmill) workout? If so then disregard…my workout was on a bike mounted to a KICKR v5.

Ya, maybe we’re talking about two different things, because in that portion of the workout for me it specified 100 RPM during the shark teeth, then 85 during the 1 min recoveries in-between, but in your post you mention that you were prompted to up your cadence during the rest phases. Here’s the workout I’m referencing: Zwift workouts: Build Me Up » Week 3 » Amalgam | What's on Zwift?

Thanks a lot for your reply. It’s really weird, that should have been the exact workout that I was referring too. I am also a biker, I am using a Zwift Hub.

Funny enough, I experienced a similar issue earlier today, when I was doing the Tine Workout. There are three main intervals there, and after a ramp up and down in Z4 the resistance should be reduced to 80 % FTP into Z3 for 3 min at 90 rpm. It worked fine for the first interval, but for the second and third the power requirement remained at around 90 % FTP for me. Super extra bonus fun, but not ideal in any way if one can’t rely that the workouts are executed properly?

Ya, that is strange. I’ve done a lot of workouts in Zwift and have never, not even a single time, encountered any issues where my trainer hasn’t responded correctly to the prescribed power. Maybe the Zwift Hub is experiencing a periodic glitch or you’re having momentary connectivity issues between the trainer and Zwift, via the Bluetooth or ANT+ connection to the platform you’re running Zwift on? Dunno.

Have you poked around to see if any other Hub users have experienced similar issues? It is a new piece of hardware, and it wouldn’t surprise me if maybe some stuff was still being ironed out with it firmware-wise and all that.

I haven’t checked if it was a more widespread issue yet, I will.

I do have proof however:
Check out the power levels of the Tine workout I mentioned above. You can clearly see the three main intervals with the first behaving like expected. At the second one, you can see that the power requirement does not fully drop down after the “spike” (and me being kind of confused about it). The issue remained the same at the third interval, but I was more or less mentally prepared for that. 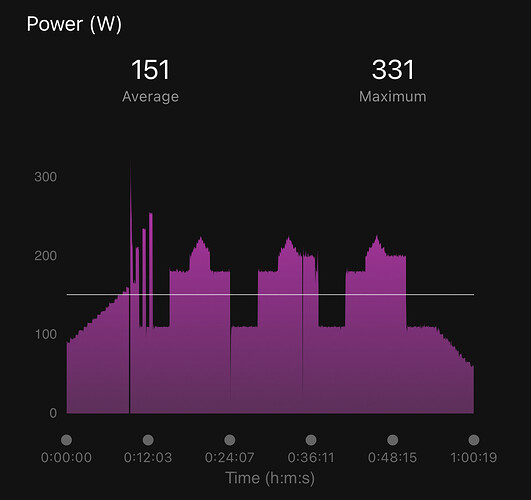