Yesterday I reached level 52 and got unlocked the 1980s kit. Before ending my ride, I was able to select it in the garage. Today I launched Zwift and went into my garage and the kit is nowhere to be found. I might just have too many kits, but I checked pretty thoroughly and couldn’t find it. Where should it appear in the list of kits? If this isn’t a case of user error, how can this be fixed? 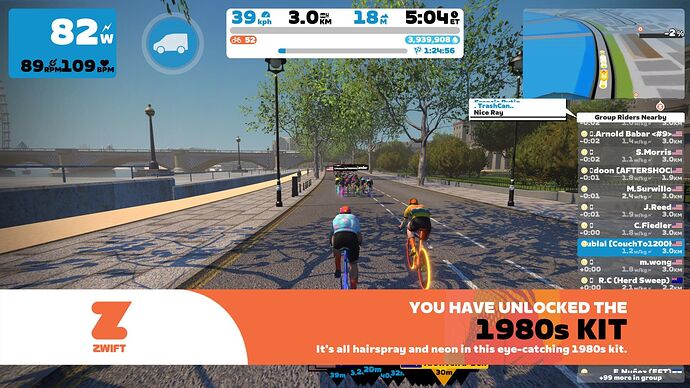 Any chance you were logged in to Zwift on a second device? That’s the most common cause. If not, contact support.

I was indeed logged into Zwift at the same time on a second device (whoops), and did the ride on device #2. Since then, I’ve signed out and closed Zwift on both devices, but I’m not seeing the kit on device #1.

things definitely get re-shuffled around after new items are introduced.

I just got the Jumbo Visma cap and it threw my blue ZCA hat out of the garage again. Exited game, restarted game, hat is back again.

. But now I’m bummed because I didn’t know there was a Jumbo-Visma cap up for grabs and I’ve probably missed out on it by now

Does the game show you as level 52? I would have guessed you are back at level 51 due to the duplicate login and just need to ride a bit more to get there again. This is a flaw in the game that affects many riders who use multiple devices. The users are not to blame.

Yes, it’s showing me as level 52 on the device where I don’t see the kit.