I’ve bought a ZHub, with 12speed cassette directly on the shop; which does not fit to my bike.- I’m riding an Argon18 Gallium Shimano DI2 with Thru Axle fixation set up.
All the hardware was supplied and delivered by Zwift as per “supposed allround” compatibility.

Here is a resumé of the different facts:

Thanks in advance and wish all of you some great new year break.

The SunRace cassette from Zwift should be possible to tighten without that extra spacer, so something is faulty - I’d guess the cheap-o cassette. The extra supplied spacer is far too thick to achieve what you are trying to do, but a much thinner spacer (eg, 1mm) might do the trick. However that should not be necessary.

Some things you could try:

You are not the first person to report difficulty removing the QR axle adapters when the trainer has a 12S cassette installed.

Thanks for the feedback.

I’ve considered doing all your tryouts (not the 1mm spacer though), but was considering it should come from Zwift espcially the one where i’d need to purchase new parts… as, like you wrote, the hub should be compatible from no extra tools and accessories.

Yes you will need to carry on with the official support channel to resolve this in the right way. I appreciate hearing about your problem on the forum so other users can learn from your experience.

I have similar issue with Shimano12 Speed cassette on my Tacx Neo. The end nut is nearly flushed with the cassette which would have caused the frame dropout to be scratched by the cassette when rotated. 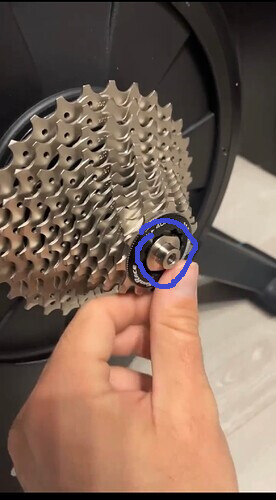 What I did was to get an alloy ring washer (1mm) and added it to the end of the nut screw. So it hung around the protusion area and causes a separation gap between the small gear and the bike frame without a scratch.

The other thing I did was adjust the Rear derailleur and bingo, no scratched frame.

Hello guys and thank you for all the feedbacks.

i received this morning a proposition of either refund or replace from the Zwift support.
I’ve asked what is the root cause if my problem (replacing and getting the same problem wont change a thing). It would also be helpful for others that are experiencing the same issue that i do. 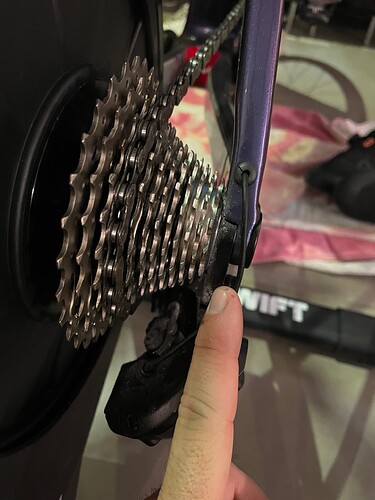 In that photo, the cassette appears to be sitting VERY far away from the flywheel. I’ve seen that before (I believe it was a Reddit post) when the whole freehub wasn’t seated correctly on the trainer. Assuming that’s not just an optical illusion, remove the bike, see if you can turn the cassette and push the whole assembly farther on. Sometimes the pawls get stuck and won’t allow the freehub to fully seat.

I received a new hub yesterday, and tested right away. It is working fine, as no lose cassette neither touching the frame.

Still, a specific tool is required to change from quick release to “thru axle” adapter.

Old one will be sent back to Zwift support. All was organized and charge free from them.

See you on Zwift.