I think you have nailed everything yourself.

Basically, forum presence is a hobby for Zwift, and meaningful interaction is not going to happen - which is why I tend to visit the forums less and less (not to insult all the great guys around here!)

I don’t find this to be accurate.

I can understand why such comments are not pleasant to hear - especially for good people.

But in terms of my personal view, this is 100% accurate.

If the impression received is inaccurate (by your view) you (and Zwift) are welcome to consider what can be changed so that I (and, by extension, others) will not have such feeling.

Feel free to enlighten us all here. Zwift: we will be glad to listen.

Basically, forum presence is a hobby for Zwift

No, my point is that you say Zwift are only on the forums as a hobby.

I am here every day and often on Saturday on Sunday.

It’s not that it’s not pleasant to hear, it’s just not true.

Listen, I absolute get the frustration that some bugs don’t get fixed quickly (at all) and that’s something that we need to work on. But we are here, not as a hobby, and you’ll start to see more interaction from us in the future.

I’ve been here long enough, and am still waiting. I guess only time will tell (“Zoon”) - but I have been here for a considerable time now, and things do not change for the better (yes, I do love the new worlds… but)

Zwift employees reading the forums is nice - but engagement, interaction, responsiveness - are no substitute for concrete actions taken (like: implement any of the features requested; no, pace partners are not a replacement for personal best bots)

Any update/feedback/response on any of those issues I mentioned above? (here and the previous message)

If none, that what I said is 100% true: Zwift is ignoring us paying customers, active forum members. It is insufficient to claim “not true” - while it maybe so, without specific subject refence this is meaningless.

Zwift is free to do as it pleases; I can either stay or leave. I am not there yet, but I have despaired wrt forums having any effect on Zwift actions.

Please consider enlightening us all - this is not a personal issue. It pertains to all of us Zwifter.

I would point you to the Clubs beta and now rollout as a great example of how Zwift listened to feedback and made changes quickly and communicated effectively. Beta Feedback Recap & January Update

While I share some of your frustrations about the speed of development, ignoring bugs until it’s too late (ios crash at the top of the alpe), lack of communication and miscommunication, I don’t think it is fair to say no one at Zwift listens or cares and nothing gets done. The last few months I’ve seen a huge shift in forum posts leading to action thanks to @James_Zwift and @Eddy_Lee.

Sometimes I feel like I should stop defending Zwift but I just can’t help it. It’s a great app which adds a lot to my fitness, and I recognise that they’ve gone through the growing pains of every startup, and that the pandemic fired customers at them faster than they could possibly have handled, which led to them having to make big changes and some things taking a lot longer than they otherwise would.

I hope Zwift has a long-term plan for improvements with the aim of improving customer satisfaction and retention, and that they prioritise each request for change based on how much improvement it will give, how many people would likely appreciate this, and how much programming time it would take. Not who shouts the loudest or most often.

I see positive signs of change. James’s contributions to the forum have been a good positive step over the past month or so and I like the way he candidly says things - I have a lot of respect for that. Also the contributions from Flint about improving racing have been good as well. And while I haven’t been involved in it, I’ve seen a lot of positive feedback from people involved in the roll out of clubs. I also recognise that nothing they say will ever please me - or anyone else - 100%, so I try to be reasonable.

We all have our limits where we say “enough, I’m not defending this any more” and sometimes I’ve felt close to that point. But for now, I see improvements happening and I like to encourage any person or organisation where I see improvement. So keep improving, Zwift, and you’ll maintain my support.

Id challenge what you are implying there James.

There is a significant difference between presence on the forum and actively engaging to improve things. Whilst I agree you have been present and are trying to get the right people involved, there is a significant lack of the real engagement in a variety of area’s. To highlight this, the example of clubs mentioned above shows how outside of the norm that is.

We dont need to re-hash the anti sandbagging thread, but the engagement has been awful at best, it has a little blip and it improves and then goes again.
The amount of unanswered posts in the bugs & support thread should be a shame to your support teams, but its been like this for years so I presume its now become a badge of honour - What is worse about this is that support point people to this forum knowing full well they are not going to get supported.
If this forum had been set up by users I could kind of understand the hands off approach, but this is the official forum and the actual support & dialogue is poor at best.

Paul above suggests Zwift are improving, I would say you moved the needle from 1/10 to 2/10 - Though this weekend has done a fantastic job of challenging that improvement. I would place Zwift on a par with EA for customer support & communication - Read into that what you will.

I think this specific thread should be retired and a new one restarted by a Zwift staff member that can keep the list fresh. I say this because I think the good intentions of the OP have been lost since they have not posted on the forum since March of 2019… 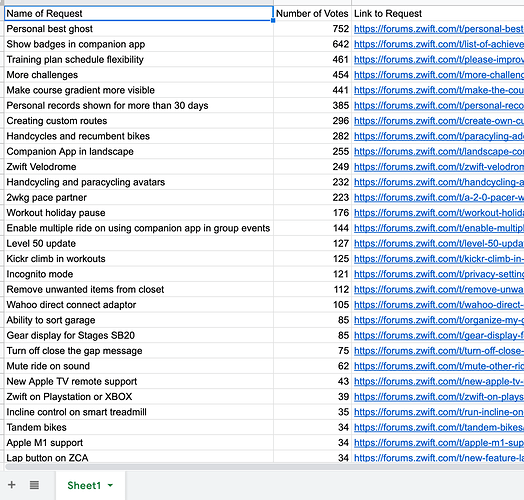 I think I need to add this to my list of threads to avoid.

Thanks James, great to see that. Also good to see that when you add the two about paracycling avatars together they make the top 3. I think this will become a more and more pressing request as we get closer to Glasgow 2023 - the first world champs where track, road and paracycling all take place together.

And on showing badges in the Companion app, I think this could be done so it reduces work for Zwift developers in the long term. If you took the badges out of the game, and put them onto our online profiles (like our previous activities), they could be visible through the Companion app and web browsers, and the Zwift team would only have to update the iOS and Android companion apps for displaying these in future, rather than the iOS, Mac, Windows and Android game apps.
If you wanted to keep them accessible in game, a link from the home screen to open a browser could do the job.

There is a age factor here. Older requests have had longer time to get votes. Personal best bot is an old one. I’m not sure if it would be on the top if it was new today.

This is what polls are good at. Let users vote among the 10-20 top feature requests users like and Zwift think fits their strategy.

I’m pretty sure personal best bots would or should be near the top, as a lot of people - especially those who don’t engage in group activities on Zwift - would use them. PB bots (or even just personal best times for different courses) would give extra ways to track your performance, beat your best and have more reasons for Zwift to give you that “ticker tape” celebration which becomes more rare the longer you’re on Zwift.

For me, personal best bots would take the feeling I get when I’m going for a Strava PB and combine it with the ghost racers I used to race against on Mario Kart time trials. They’d also be very inclusive, as no matter what your ability, everyone can race against themselves.

How about if a feature request has at least X votes (50?), a Zwift staff member needs to make a comment in the thread on feasibility and whether they plan to add it to the roadmap?

Feature requests that will never be implemented, should just get a comment and be archived. Duplicates can be consolidated or archived. Prioritize (priority matrix) and keep top x, archive the rest. Remaining feature requests could be grouped by area.

Also good to see that when you add the two about paracycling avatars together they make the top 3.

Not that this makes the feature less valuable, just that you can’t really add votes from two similar ideas and then compare that number against the number of votes from another single idea without thinking about double counting.

That’s a very good point. Whichever way it is, that’s an example of a thread which could have been merged earlier. Incidentally, when it comes to avatars representing adaptive cyclists, I think there’s much more to this area of inclusivity than just adding a new avatar or two and it’s an area I’d like to see Zwift being more vocal about.

I looked in to the club creation just to see that I can’t create rides in Bologna or Watopias wasteband etc. Why not?

So typical of Zwift.

0 (like is “zero”, “nothing”, “empty”) feature requests implemented? no real response (see above) to previous posts (even in this thread) about unfixed bugs/issues?

Embarrassing (yes, please ignore those threads… as well as all the rest)