No idea but my Kickr’s Zwift speeds are reflective of IRL speeds (run same drivetrain on Zwift bike as IRL bike, mostly).

Couple of things to try (if not already done): factory spindown, change wheel circumference in Wahoo app to match, un-pair Kickr from Power and Control and re-pair after power reset of Kickr, Kickr firmware update or if latest and tried everything just mentioned, try going back a level.

What watts and w/kg are you putting out at 35mph in Zwift?

Zwift is working from your power. The gear, cadence, etc. it doesn’t care about really, just the power and what you told it about your height and weight.

I just downloaded the Wahoo Fitness APP and put 28mm 700 wheels into it, was set to 700x 23mm or 25mm, will see if it makes a difference. Wasn’t putting out much wattage , only 120-150W needed to reach 35mph as going down a hill. I would reach 35mph with a 50 chainring IRL with similar wattage on a similar gradient, with the same chainset, no idea what rear cog though as never span out with the 50

Reasoning is you can hit some fairly unrealistic speeds downhill in Zwift and to avoid spinning out, they fudge the numbers so you have resistance.

Bound to be a GPLama vid or Zwiftinsider article with more details… actually, here you go, 2 in 1 … 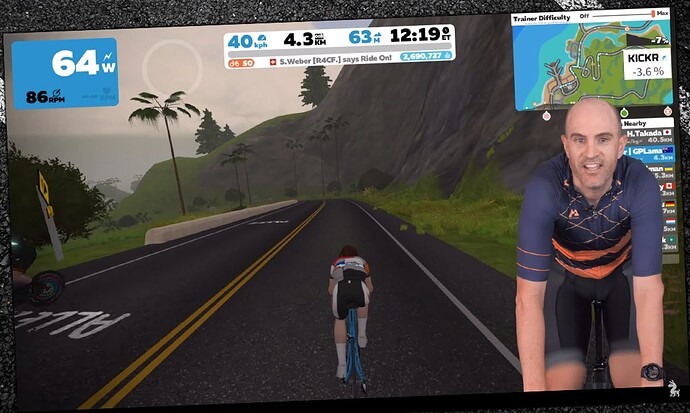 Zwift Trainer Difficulty on Descents: Did You Know?