Zwift: Microbursting doesn’t exist. It’s a figment of your imagination.

Look around 6 minutes. I have no idea if it really works but it sure looks weird.

After the race gets going, the rider gets dropped but comes back with 400-500 watt efforts but cadence fluctuates 90 to 45-55 or so every 3-5 secs but power does not fluctuate.

So is this what microbursts look like?
Looks like Zwift could track power and cadence and at least warn a rider that this appears to be happening.

I’d ask your team captain to provide WTRL with a link to the video and request they DQ him for “unusual pedalling technique” (can’t remember the code).

They have responded positively in the past to this kind of thing, especially when the evidence is so clear cut. I’m not sure if that was just micro-bursting or something else as well, those power/cadence fluctuations look strange

Any of the climbs.

I saw one guy do something that looked very similar in ZRL today on the 2nd climb. He won indeed - my sustained power could not match.

I am wondering if this behaviour is on purpose or just related to specific trainer.

To be fair to Zwift people have been claiming that microbursts is a problem with the Zwift algorithm. This guy is doing 500-600w for a few seconds then a dip to less than 200w for 1 second and repeating.

At the end of the day 600 watts is 600 watts and if you could actually ride like this and repeatedly do bursts of 500-600w every few seconds then you would go fast (in real life and in Zwift).

I’d be interested to know what sort of trainer they are using (Zwift would know this, I don’t think we as end users can know what trainer someone else is using) and would like to see someone try to replicate this with a dual recording from a crank or pedal based power meter. Because it’s entirely possible that this is a trainer issue where the trainer is over reporting watts when someone is accelerating.

For example, the rider might only being doing bursts of 300w and the trainer is misreporting those bursts with over inflated power numbers. Most people could do 300w bursts every few seconds and if the trainer is over reporting then it’s a problem with the trainer. 600w bursts for nearly the entire race… not so likely to be real numbers. I counted this guy doing 20 bursts over 500w between the 6 and 7km marks.

There’s not much Zwift can do about that as garbage in = garbage out.

They can have systems in place to detect it and flag it like they do for really stupid power numbers.

The rider is benefiting from both sticky watts and micro bursting and looking at recent race history most races look similar. It would be interesting to see the trainer used maybes it’s the microbusters dream trainer in the elite directo.

This thread will probably get closed as we can’t name and shame even though the rider is clearing to post their stream.

@gloscherrybomb I would report it to Zwift and wtrl. At one point WTRL did claim to have automated tools to detect such but clearly that was a bit of a fib.

Watch a video of a helicopter where the video frame rate and shutter speed align with the blade RPM: Helicopter Appears To Move With Stationary Blades - YouTube

A combination of the video resolution, the scan rate, interlacing, and “input data” (the blade turning) resulted in a weird visual artifact.

The point I’m making is what we see on screen in Zwift may be different from how the data is being interpreted behind the scenes. What evidence do we have this is “cheating” and not just some strange visual artifact?

NOTE: I am not a racer and don’t study this stuff. My question is genuine as I’d like to understand what’s going on here.

The .fit file from ZwiftPower has all the data. You can see it in the original post. You can’t really trust what you see on the video as it likely has 3 second power averaging which can mask exactly what is happening but the .fit file shows the raw data that Zwift gets. I based my earlier comments on the .fit file data.

Look around 6 minutes. I have no idea if it really works but it sure looks weird.

Yeah, that does look “unusual”, seeing the power fluctuate between 200w or so then up to 600w+ then back.

Watch from 7:52 as well when the group drops him.

Well its gaming the system…

He knew how the trainer will respond and honed his technique to continue through after each burst and float.

Racing on Zwift being credible still have headways to go.

That’s a lot of work for being off the podium.

Can’t you just hookup an eBike to a trainer if you want to cheat? It seems like it’s impossible to stop someone from cheating on Zwift

I hear you bro. We have lodged a complaint about a rider in a B grade ZRL race who used this “successfully” and uses the technique in every race that he is under pressure. He there are periods in his data that is smooth, so not like it’s a faulty trainer

We have previously delt with a rider who is a C IrL and was able to get close to A+ using this technique (plus some other manipulations) so there is something to it, but nothing gets detected like they say it can, and nothing gets done 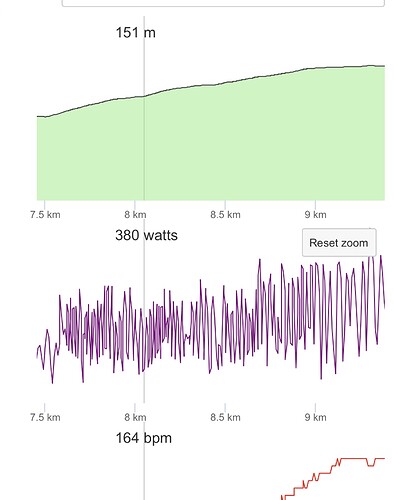 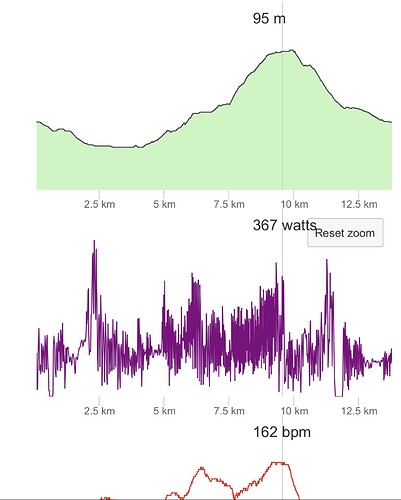 It may get shut down, but in my opinion if someone posts a public stream to YouTube it is open season for discussion.

Another great example, also clearly not sticky watts. There is no flatline.