First and foremost will start by saying sorry. I know this has been asked a lot, but can’t quite figure out the correct answer.

The question is what do I set the Trainer Difficulty to in the settings. I want the realism (as close to outdoor riding as possible), I want to race, I’m not concerned about winning races but do want to be set up to be “the same” as others (eg, dont want to be climbing a 10% gradient if others are effectively doing a 5% gradient).

Right now I have it at 50% (the default I assume). Do I put it to 100% if I want true realism or is this not quite the right understanding of this setting - as some say its more like changing cassettes on a bike.

Cycling noob (not had a bike since being about 12 years old (so 30 years go!) but a quick try of Zwift on a spin bike got me wanting to race, ride, and get outdoors too. So please treat me as a noob in your replies.

If you want resistance to be as close to ‘real life’ as possible, then put it on 100%. That way if you hit a virtual 5% gradient in Zwift, your trainer will simulate a 5% gradient. Rather than simulating 2.5%, as per the default setting. The Kickr Core can simulate gradients up to a nominal 16%.

What it doesn’t change is your speed, which is still determined by your power output, weight, height and so on - same as normal.

Given that, as far as I’ve read, quite a number of people have it at 50%, does it become a disadvantage to go to 100%? Taking on a true 10% gradient vs my opponent taking it as a 5% gradient (albeit, I believe, would have to pedal faster to generate the same speed)?

The basis of your speed is unchanged. You would have to change gear and/or cadence more than they would. That’s it.

How many teeth on the front chain ring? Mountain bikes have different gear ratios than road bikes that can put you at a disadvantage producing the same power on flats. Trainer difficulty wont really matter if your “spinning out” (lack of resistance on flats and down hills) on the flats in a race against others with standard road bike gearing.

I think its 36/22T. On flat I can use the front large chainring, then the smaller ones on the back and get enough resistance to lay down power as far as flat. Downhill I’ve not really tried, tended to be a after a climb so free wheel / slow pedalling to rest.

But definitely on flat I’m not spinning out if I drop into any of the three smaller cogs on the back.

Haven’t really tried uphill properly yet - assuming I use the front smaller cog with the larger cogs on the back?

(this is my first dive into cycling since about 1992 with a Raleigh bike).

This gives you lots of information on trainer difficulty 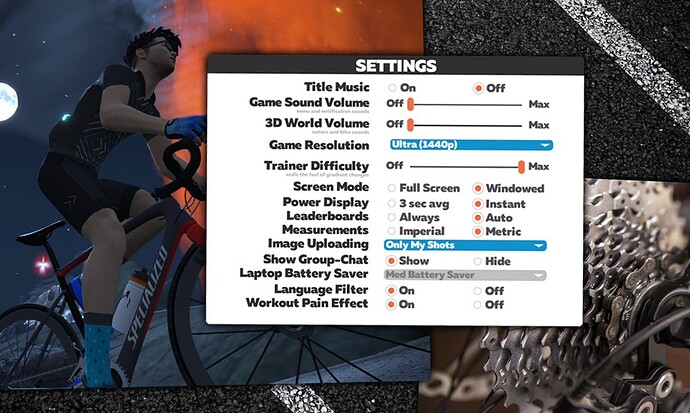 Dig into the most misunderstood and controversial setting in Zwift’s menu!

Setting at 100% will give the best realism on flats and going uphill. On downhills you will spin out with that small front chainring…and quickly…Note: if you are racing…you should be attacking downhill…

With a 50% setting gives more ability to output power. The trainer setting, in my mind, gives me more gearing the lower the setting.

Your speed, uphill or wherever, is determined by your power output, regardless of the trainer setting.

Whether it matters to you depends on your personal preference for ride feel, and your power in relation to the bike’s gearing. I recommend trying it at a variety of levels to see what you like best. You don’t have to use the same setting every time on a given route. If your plan for a ride involves steady power output, I’d set it lower. If you desire a more dynamic pace and engagement with the terrain, set it higher. Sometimes I do an hour with it at a high level and then turn it to zero for another hour in the same ride.

GP Says it best I think.

It’s true as far as it goes. On a 2 minute effort it’s relatively easy to stay on top of the shifting and maintain constant power. But what happens when a rider spends around an hour going up AdZ at their max pace? My unscientific observation is that when I go up it with TD off, riding with motivated riders similar to my ability, as we get some distance up the climb they ride away from me on the steep parts, I pass them every time the gradient drops significantly (the variations are like +/- 10%) and I carry more speed into the next rise. I think what’s happening is that riders lose focus on the shifting as they tire, they throw away speed on the flatter parts, and they trash their legs a little more on the steeper parts. I’m pretty sure it’s true for me as well, having tried it both ways. I know riders aren’t all the same, but for me being able to output extremely steady watts (at 90% heart rate for roughly an hour) seems to give me a faster time (higher average watts) even though “watts are watts” and TD doesn’t affect that.

that makes sense, when I’m at 50% TD and the grade levels out I have to pedal faster to keep the same power, that transition in resistance is where people loose the power they would have with 0% TD. the inverse is true on the steeper gradients.

Thanks for all the replies. Will have a play around and see what fits for me. Guess I just go on my gut feeling.

Also going and doing my first outdoor cycle this weekend since 30 years ago, so will have a reference of an outdoor ride, the feeling, gradient etc and then mimic that in Zwift somewhat.