EDITED (Improved) I am sure this has been discussed previously, but with some recent longer ride events around France, it is BEGGING for some more love surely?

There are a couple of road sections that seem ready to deploy (notably the straight road on other side of river to bypass ‘les intensines’, and others that have had a bit of a start made. Could link up various spots of the interior to create additional flatter courses, which are popular with group rides. Maybe add a river/canal along the centre area and have some nice little towns with some castles and bridges to look at.

How about a bridge out to Mont Saint Michel? And a quick lap around inside the walls. Imagine if the ocean could be tidal also … wow!

The Cote D’Azur would be lovely any time of year on Zwift. Fancy a ride along the coastline to a Monaco-esque town complete with Casino and Palace? Then a short climb return option, or just turn around and cruise back along the coast … Yes please

Then … importantly, lets get the other two Ventoux ascents in the map !!! Now given where they sit geographically in real life, some creative licence will be needed and a bit of “cut and paste”. I think it is totally achievable to have climbs in the spirit of Malaucene and Sault ascents to add to Ven-Top though.

Imagine the epic route for a Triple Ascent !!! 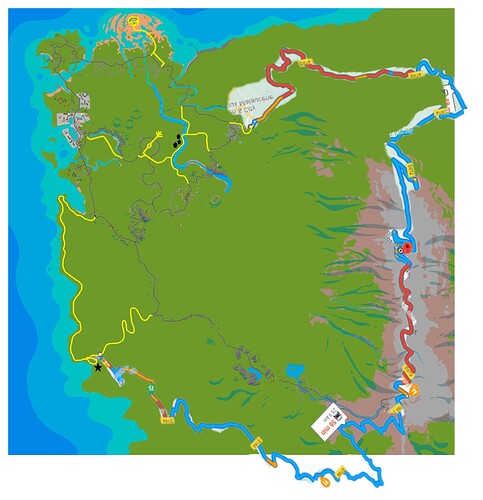 Agree, France needs love. Many people say it’s a boring course. And it kinda is. Other countries are available though also.
I’d love to see some additional routes looped into Yorkshire too, we have tons of epic roads and climbs begging to be added.

Don’t expect anything prior to July 2023 when the next TDFF is on.
Although, they hyped the hell out of this year’s event and didn’t provide a single update…

There is something about the French routes that I really enjoy and having the three ascents of Ventoux available would be worth the subscription alone!

Very much in agreement on this.

The France map has lots of great scenery, but the handful of roads we have are starting to get very stale.

I bet they will get more revenue (new subscribers) from that marketing campaign than they would have gained from adding roads to the France world. More subscribers means more funds for development work. Subscriber churn due to lack of new roads is probably tiny. I’d love more novel routes in any world, but what they did probably makes sense for the business. Also, more subscribers means more people in game, and I like that as well.

While I would love for those to happen, my vote for Richmond, Innsbruck, Watopia and Bologna to get some more paved roads or even a new world like La Ceja or Medellín, Colombia, would supersede my desire for more in France.

My vote would really be some more steady cat. 3/4 climbs. A full gas and STEADY (double digit stair steps, or flats through a volcano) effort between 8-10 at race pace for A/A+ riders would be fantastic.

The last thing we need is more Ventoux. That route is rarely ridden. It’s typically a ghost town compared to other routes. I’d rather have a mini-alps section, mini versions of famous alps climbs, like 300-500m, where you could do a few back to back to back.

Adding some Vosges mountains would be nice too. I mean, Tour de France Femmes avec Zwift went there too…

If they are adding anything it should be La Super Planche De Belle Filles.

The low hanging fruit would be to release all of the existing routes for free rides. Add some badges and it’s done. People who don’t race those routes would probably be happy to see them as options. There are dozens of them.

More France wont’ be a bad thing… even making the current Ventoux part of other loops would be OK, as long as you can break it up with different combinations. there’s just not enough variety in France yet. I’ll go one further and say there could be an equally interesting network of roads to ride on an Italian map. There are so many compelling historic segments to be ridden.

That’s me, I don’t race so never ride bologna or crit city.

I think it would be great if they could join all the little worlds together, i know GPS plots would be weird but there is surely a way to do it. Join france and Paris just makes sense! I have no idea why they didn’t do it when they were made, a bit like london and the Surrey hills bit.

Does anyone know if Zwift has ever acted upon user requests for new routes? My impression is that these discussions on the forum are mostly pointless. They have a process for selecting and creating worlds and routes. It’s very costly and time intensive. The forum has no real effect on that process. Asking for specific roads and routes doesn’t result in those roads or routes being created. Am I wrong?

Does anyone know if Zwift has ever acted upon user requests for new routes?

Not to the best of my knowledge.

It is fun to talk about but largely pointless.

the only thing I know of is the rebel routes turning into real routes on the already available roads… nothing has come from the forums unless it was pure coincidence I’m sure.

It is fun to talk about but largely pointless

Personally, I’d rather see no more worlds but rather join the worlds together into Watopia. We requested it years ago, the GPS thing is not the major hurdle it’s made out to be - after all, there’s a plethora of cyclists complaining about Zwifters taking their IRL KoMs on London, Richmond, Innsbruck, etc.

Maybe it’s a requirement of their UCI deal

but Makuri could’ve been an addition to Watopia.

It doesn’t hurt. and we know they at least see what folks are saying here. Who knows, maybe it sparks an inspiration on their end and gets folded into the ongoing dev of the platform.
There will be a point in the future that the game and dynamics are so finely refined that the only things to do will be aesthetics and routes.

My suspicion is that each world is essentially a separate development project with its own codebase for the route details.