Problem: The Zwift workout-in-progress UI is hard to decipher and non-inuitive. It is hard to interpret quickly when working under load.

Solution: Please replace the vertical “strip” at the left with a simple overlay of the target/upcoming intervals on the existing workout graph at the bottom of the screen. Simply graph the upcoming intervals in the same way as the already completed ones, with a simple line/marker indicating current progress point. You can then visually see what is coming up and easily see how far through the current interval you are.

Reasoning: This is how literally every single other training app does it, and is vastly superior and much easier to interpret quickly and intuitively, without effort.

Here’s how Wahoo do it: 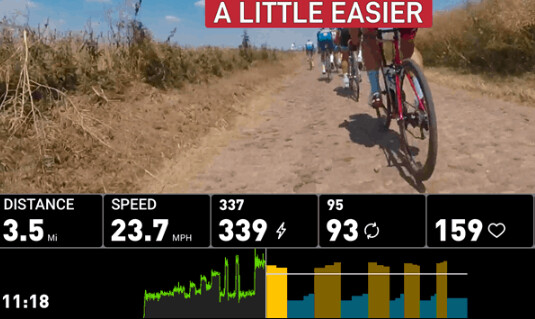 Here’s how Rouvy do it: 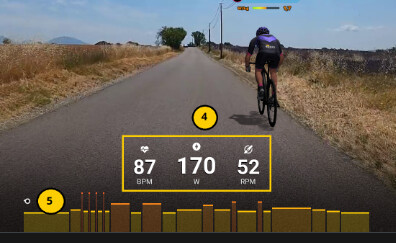 Here’s how Xert do it:

Here’s how TrainerRoad do it:

Here’s how BKool do it:

There’s more (literally every other platform) but I think you get the point! Just show the upcoming work in the same way as the work completed. Its visually intuitive.

Take a look at how much more difficult this is to “see” what is coming up after looking at the above… this is Zwift:

Hopefully its clear how it is far less intuitive and can’t be readily interpreted in a single quick glance. I’d need to take over a minute to try and read that and interpret it and build a model in my head of what it meant and how the workout was structured. Its hopeless. Its completely unclear and impossible to visually and quickly process the upcoming work. Please, please, please replace it. Its so bad that people use other apps to play workouts just to avoid using the built-in zwift workout display.

Bumping this one again since its been 3 months since originally posted. I do workouts most days and this would really improve the experience

I would not agree with you, I think that Zwift is more gaming than training approach for workouts.

But what I would include is the possibility to select / edit much more training information (average power, Normalized Power, right-left balance, etc…).

I would not agree with you, I think that Zwift is more gaming than training approach for workouts.

What an odd response. I’m guessing English isn’t your first language so I wonder if something has got lost in translation??

I… think Zwift themselves might disagree with you given the effort they’ve gone to to set up a workout player, and a massive library of workouts including “pro workouts”… not to mention the Zwift Acaademy programme

That’s not to say you can’t “free ride”, and of course Zwift is a “game”, but Zwift absolutely intends to be taken seriously as a training platform.

Either way, your point on Zwift’s “focus” as a company is also 100% irrelevant to whether the workout UI design is easy to use and follows solid design principles

Either way, your point on Zwift’s “focus” as a company is also 100% irrelevant to whether the workout UI design is easy to use and follows solid design principles

A company’s focus is somewhat relevant in that it will dictate where they invest their development budget (should they spend time improving this UX, or work on ‘x’ other feature. I think Ivan’s point is he doesn’t agree this is an area Zwift should focus on given the other things he would like to see. Which is fine.

I do workouts on Zwift all the time, I do think the UX can be improved, but for me it’s not a big deal because the workouts I do are pretty straightforward and I know what’s coming up without any major issues, so it’s just not a big pain point for me personally.

Gotcha, yes that’s a little more clear and would make sense. I can definitely understand it not being a priority for an individual if they don’t do workouts often. I do workouts most days, often “custom” ones and the UI is definitely weaker than any competitor product I use - there’s a reason literally every other platform uses the same, intuitive visual layout, and its unclear to me why zwift have diverged from this

why zwift have diverged from this

Because Zwift is different. And probably doing something right because training platforms has been around for many years and Zwift is still at the top.

Being different for the sake of being different? Yay. I would, personally, rather have an intuitive UI Gerrie that made workouts easy to visually understand.

I would, personally, rather have an intuitive UI

But then the question is why do you use Zwift and not any of the other workout platforms?

I have use many other software before Zwift was even an idea in Jon’s head. And they just don’t hit all the point that Zwift have.

People complain about Zwift but still know there is nothing close to Zwift.

But then the question is why do you use Zwift and not any of the other workout platforms?

I have use many other software before Zwift was even an idea in Jon’s head. And they just don’t hit all the point that Zwift have.

People complain about Zwift but still know there is nothing close to Zwift.

I’m not sure if I’ve caught you on a bad day Gerrie but your attitude is a little puzzling.

This is (is it not?) a feature request forum for customers to request improvements. it doesn’t help to simply get defensive and state the product is perfect and doesn’t need improving. The more reasoned thing to do is to try and understand customer concerns and issues and how their input can be used to improve the platform.

This should be a forum to allow customers to request changes, surely! If you simply bat these down and say the product is perfect and effectively “go elsewhere if you don’t like it” then really, seriously, what’s the point of the forum? Its a frankly toxic response and not what I would expect.

I did not say go somewhere else, I was trying to make the point that people flock to Zwift even tho there is other industry standards out there some even FREE.

see what I did there?

Have you looked at the workout tab in the Companion App? That is much more akin to what you’re looking for.

I would rewrite my comment:
the zwift approach for workouts is a gaming approach. It is the opposite of Bkool for example (or Trainer Road) where you have the plan intervals in a plain screen, and you track your effort within the intervals. In this sense, Zwift approach is like a playing a video game. You see the different steps.

Of course, it would be nice to have the most options possible, so that everyone can find the one which suit the best to their…

My critic to Zwift is that over the years they have not evolve their workout part so much, many of us have request many times the possibility to see relevant training data like average power/Hr, etc… and even if Zwift workouts are able to do that (you can see power average in FTP test) you cannot create a interval with this option which allows to do that.

My comment is clear: the UI is maybe the reason because most use Zwift, it is the difference that make Zwift better than the “industry”. So to copy the industry standard may not be an improvement (as said, it would be nice to have more options).

As comment: I would find super if there is the possibility to have the “BIKE COMPUTER” UI, for some rides would be super.

you can see power average in FTP test) you cannot create a interval with this option which allows to do that.

You can do that see: Zwift Workouts: Display Average Power in Custom Workout Intervals - YouTube

I have no issue with the way workouts are displayed in Zwift but as an AppleTV user that workaround won’t work for me.

Given @Shane_Miller_GPLama video has over 26k views there’s obviously interest/demand for this feature. I’ve been wanting a lap button and avg watts display for 8 years now and I know others have as well, if it’s as easy as it appears in the video why can’t Zwift do it…or even acknowledge the request?

changes to the dashboard page on the companion app have been asked for since i started on zwift and still it is a pointless waste of space in the CA - it could/should be so much better and would soilve a lot of what you’re asking for.