Exploit found which can lead cheating

Yep WTRL’s response is trying to assure all past and current events were not victim of this exploit which is utterly false a seasoned cheat will know how much weight they can deduct to keep their HR in the correct zone so not to arouse any suspicion. One of current ZRL teams which was high up on the table got disqualified from this weeks TTT because one rider was 0.1 w/kg over cat limits and it was his 4th race of the season not due to cheating, cruising or sandbagging just a full on maximum effort for his team.

How do you spot a company in turmoil - Constantly fire fighting, and doesn’t take responsibility for their own mistakes. Its a fairly cowardly action to ban @Luciano_Pollastri_ZE .

or was this maintenance again @Marc_Cote

Very sadly unsurprising that Zwift have known about this exploit for years but done absolutely nothing about it.

This is appalling, toxic behaviour by Zwift.

There is no doubt, reading the blog, that the article was well researched and was made in good, inquisitive faith.

The correct response, Zwift, is to say “thank you”. You’re acting in a toxic and irresponsible way by banning them, and the notion that this should have been disclosed privately is ridiculous given that this is clearly a known bug already.

This is retaliation. No good company should ever retaliate in this way against good-faith disclosure. It enables cheating and even security risks to flourish.

You owe them a climbdown and an apology.

Crazy that @Luciano_Pollastri_ZE is banned over this. Zwift should be all over this, and make an emergency patch so this cannot be exploited anymore. Especially with the upcoming World Championship. They can’t afford there to be ANY discussion on the results of that race.

Just to give more context and detail, I have received a further email from Zwift Support explaining reasons of the ban. Reproducing the part suggesting I will be still banned as long as the article on wordpress is not removed… "Your ban was both in relation to the performance metrics found by our team, but also the blog post in which you created an extensive guide about how to cheat.

Both of those issues are violations of our Terms of Service (mentioned in the Community Guidelines that were sent to you in the previous message). To be honest, your violations warrant a longer shadowban term than what you had received. As such, your ban will not be reduced or removed before the 30 days are complete.

Further, your wordpress article is still published. So long as it is, your shadowban may be extended."

Just drives this sort of thing underground, Before you know it, there will be sites with much more than just this exploit, which will not be traceable back to a specific user account.

If they fix the exploit, the existence of the wordpress site is irrelevant. Classic case of shooting the messenger rather than having a look at why this hasn’t been resolved in the 2 years they have known about it.

Quite simply. Zwift, you’re in the wrong here. Do the right thing.

The right thing as in remove the ability to change weight and height on the fly during the current Zwift session in progress. Changes only come into effect after terminating Zwift and restarting the game.

Just taking a guess… Zwift are currently embarrassed this was released 2 days before the World Championships.

They now have multiple fires to fight and this action is making someone feel good and have some retribution.

Did they ban anyone else who had posted this cheat online over the last 18 months? Answer is no.

By the way, sticky watts post with clear instructions how the cheat works is all over the place, including in ZI. What is the difference between that post nbeing there for ages and my post? 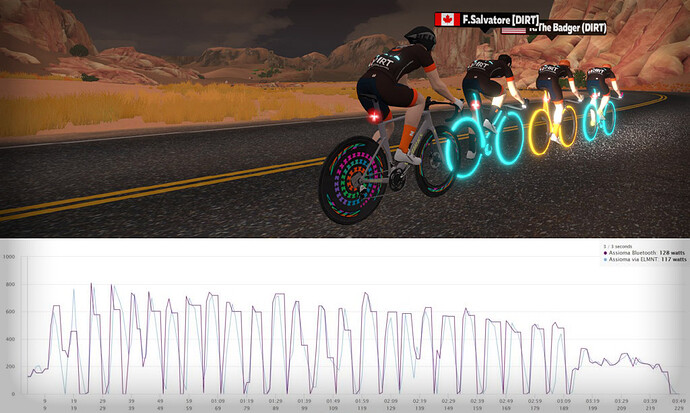 Sticky Watts: Why They Exist, and How They Affect the Zwift Experience

Take a trip down the power data rabbit hole! 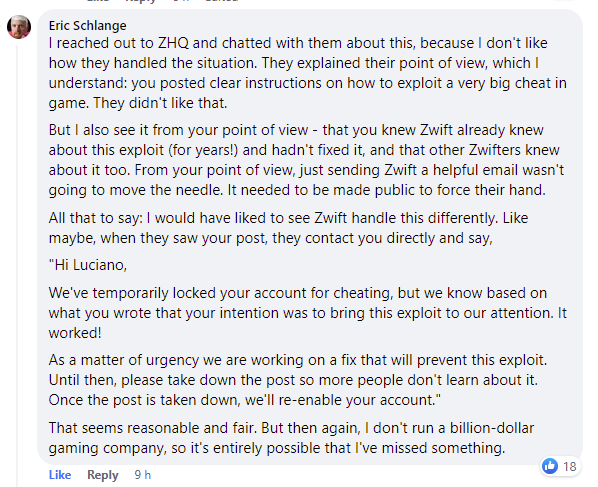 The way Zwift is handeling this is creating a PR sh*tshow for themselves. This was exemplary on how NOT to react to such a blogpost. They knew of the problem. Somehow it slipped their minds, got a low priority, or something else why it hasn’t been resolved already.

Why they choose to ban the guy disclosing it is beyond me. They should be thankful.

It’s like a lock producing company suing a locksmith/lockpicker when they show how a lock can be opened easily without a key, instead of recalling the lock and fixing the issue (YT: Lockpickinglawyer very interesting for anyone who has bought a lock).

Totally supporting your action @Luciano_Pollastri_ZE and thanks @gloscherrybomb for giving evidence of this here. I think this whole situation makes clear what we are for ZwiftHQ (paying customers, not allowed to interfere in any way in the business, apart from paying the monthly fee) and what many of us hope to find in Zwift (a civil and very lively community, where fair rules should be respected). The ones to be sanctioned are those breaking the rules, not the ones trying to improve things as you did, Luciano.

The WTRL false accusations have now been deleted. 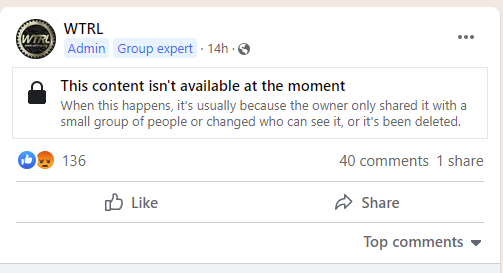 It could have been so easy:

No need to ban him.

Thank you. The situation is total nonsense. I have been a firm supporter of Zwift and quite contributing to the community for two years. Yesterday has been a breach of trust and faith on the platform and on the corporation, but not on the community who has been extremely supportive.