For the record I am no cyclist. I like resistance training. But I do need something for cardio.

I am new to zwift and took some time and a little extra money ($200) to try and find the cheapest new bike I could set up on a direct drive trainer. I normally ride a giant revolt on a saris H3. But I traded my brother for a cycleops hammer from 3 years ago. He rides a lot and I don’t so he got the quiet trainer lol. Damn is it much quieter!

The bike:
Enters Walmart and their Kent Genesis gravel bike on a holiday special of $128. Lol no kidding. It’s still $128 as I type this. I got a shram 7 speed cassette and cassette spacer kit for $20 off Amazon. I also put a new seat and post on it for $40 and a shorter stem for $10 also Amazon. Basically $200 not including the spd petals and shoes. You don’t need the pedals or shoes to ride but I have them so I used them.

The trainer is a 3 year old cycleops hammer. The original. Some call it the H1. It’s loud as a jet but is reliable.

So yes a cheap 7/14/21 speed freewheel bike will bolt right up to a direct drive trainer with some spacers to tune the gear spacing. I used three spacers. 1mm, 2mm and 2.5mm. Then followed standard tuning steps.

The best part is this cheap ass thing can handle some serious power. Today was only 1600watts but I have hit 1800 on rgt on this bike.

All together if you got a used cycleops and a cheap Walmart bike you can have the full zwift experience for under $500 that can handle serious power. The 1556w pull was seated and the 1592 was standing. As you can see I have no idea how to sprint on a bike to the point that my seated power is as strong as standing.

. The pics is to show the bike did take the power. 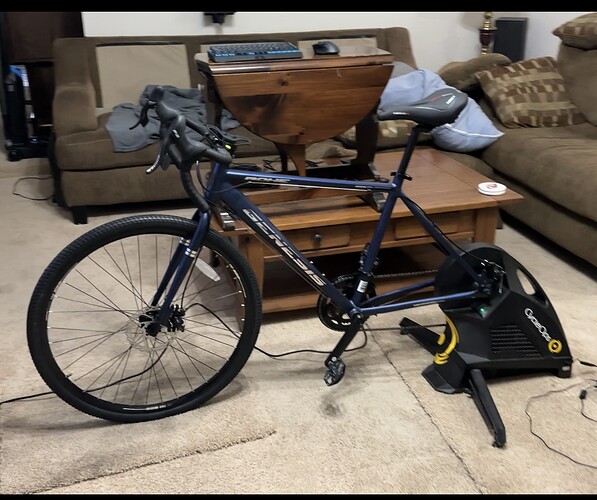 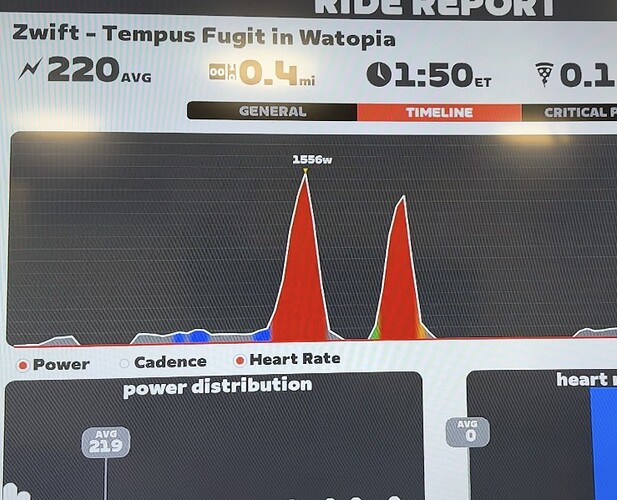 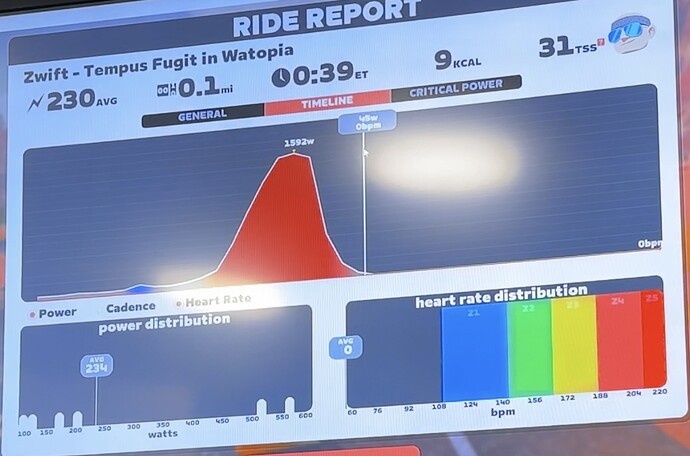 This is the cassette and spacers I used. 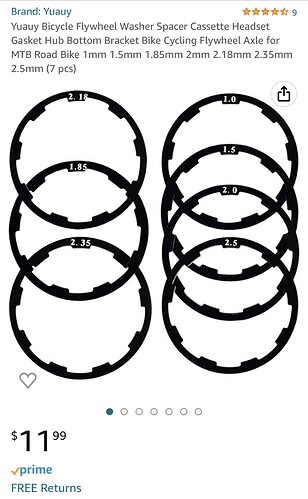 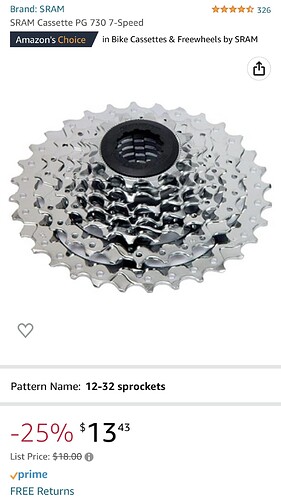 edit: didnt actually look close enough. still, you can get a h3 for dirt cheap now so need to settle for an original

Is that a challenge? Lol. You are right. I still pop out with spd clips when seated. But all bikes come with those cheap pedals. But for $128 this is lots of fun.

What’s your YouTube channel name or the title of your 1600w pull video on YouTube? Thanks in advance.

You’ve got some very explosive power! You’ll probably need road clip-in pedals or double strapped track pedals to hold your wattage. If you shoot new videos, show yourself riding the bike to squelch the disbelievers.

Thanks. I will make sure to get more than one angle next time. I will capture it with obs next time.

I wanted to show that you don’t need a $1200+ dollar bike to get a good experience on zwift and that not all cheap bikes are fragile. Also that it’s super easy to put a 7 speed on a direct drive.

you don’t need a $1200+ dollar bike to get a good experience on zwift and that not all cheap bikes are fragile.

The components on your walmart bike are very low end, it will be interesting to see how long they last before you need to replace them and what the long term maintenance costs are.

probably the only thing i’d do is put a nicer chain on it since it probably came with a POS. and a saddle

The bottom bracket most likely wont last long either, usually dont get greased very well. The assembler may have also done some terrible work on the cables, you never know…

I did get a better seat post and saddle. The bottom bracket/crank set is the same as the Giant believe it or not. However the front gear set is press fit not bolt together. But a Shimano replacement is only $35. The cables are good and external. It shifts perfectly.
Forgive me if I get terms for bike parts incorrect.

The Shimano tourney TZ derailleur is only $16.

The L-twoo shifters and both derailleur is only $16

So if and when they fail they are super cheap to replace. 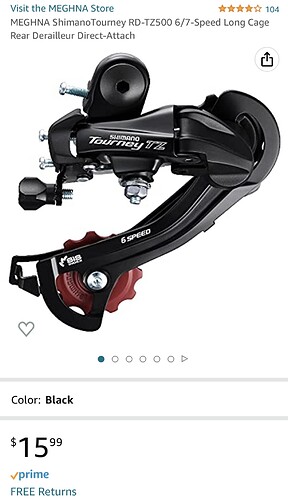 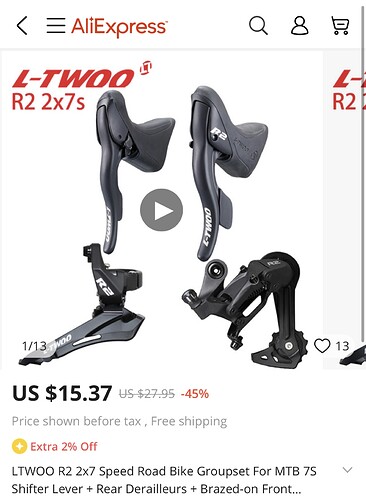 The seat and post. You don’t need pads for this for a 30min ride. Any more and I go to the seat from the seat it came with and shorts. 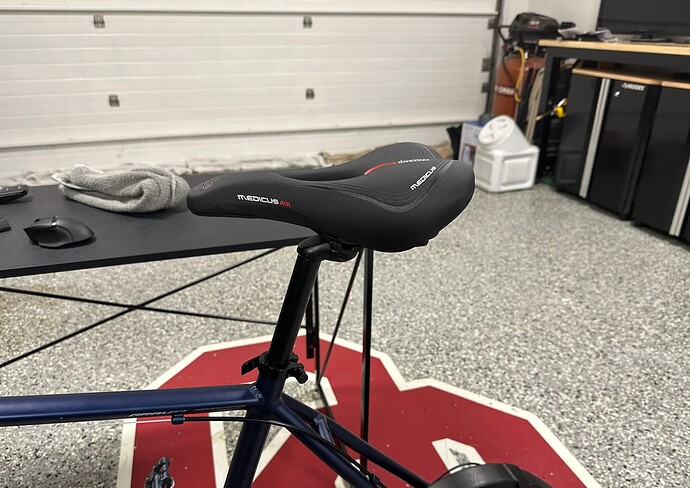 The two lower bracket pictures. First one is the giant revolt the second is the Kent. Same with square ends on the shaft for the cranks. As for long term cost I can replace everything for $80. That’s groupset crank set and lower bracket. 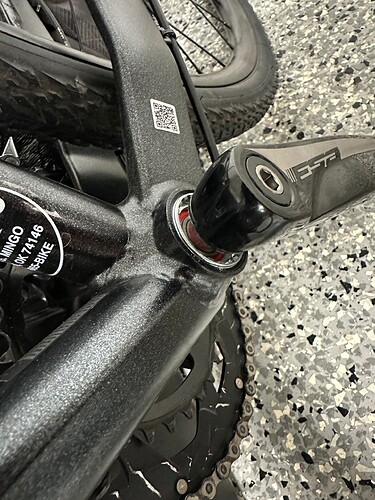 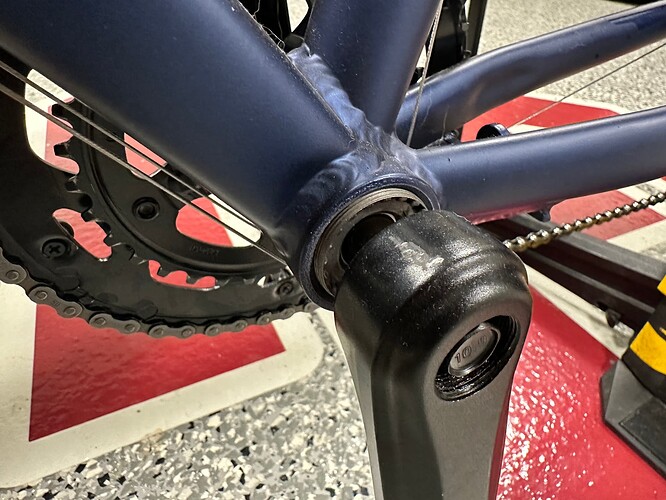 Want a Shimano lower bracket? $17. What about 7 more gears and a Shimano tourney crankset?$25. 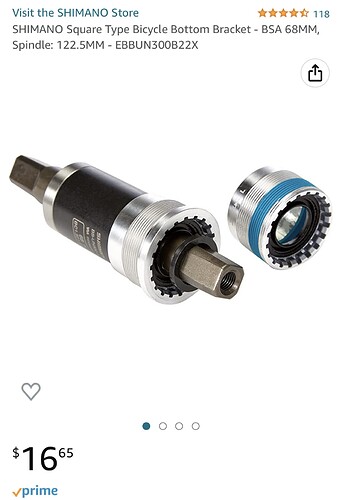 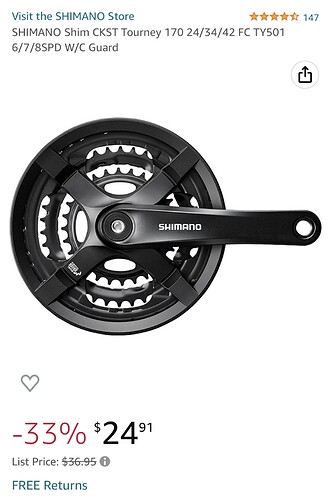 I’m not one who says people need expensive bikes. That said–I’ve built bikes and wrenched on bikes for my LBS, and there are definitely things to beware of from a Walmart bike. The cheaper components will very likely wear faster, including quite possibly corroding due to sweat faster. I would also be very suspicious that the bike got built properly–that bolts got torqued to spec, that derailleur limits were set properly, that spoke tension was checked, etc.

Again to be clear, I’m not saying your bike will have any of those problems

But I will frequently and strongly warn anyone considering a cheap big box store bike that they really should have those issues checked out by someone with the right tools. Bike prices can be eye-watering for high end stuff, and some brands charge ridiculous amounts across their ranges. But others aren’t so bad.

You might get lucky, but…honestly, the number of times I’ve seen walmart/et al bikes sitting in the store with the forks installed backwards tells me what the odds are of getting a bike that won’t have significant issues.

It’s not just the bike, it’s the building of that bike as well. It took me (pretty handy, years of home wrenching) a couple of months of building bikes as a day job before I felt confident and smooth at it. What training do Walmart employees get?

So–yeah, cheap bikes can be great, and bike snobs are wrong if they say you need a $5k carbon speed demon. But IMO, a dedicated bike shop is still the safest place to get a bike from. And if they can’t get a beginner on a decent sub-$800 bike, find a different bike shop.

Hopefully OP, you got lucky and that bike will keep doing you right

You are right. Big box store bikes are usually a bag of bolts. Thankfully I am great with tools and my hands. So I already bolt checked it and greased everything missing grease. Been building things my entire life. So for me anything that brakes down I can be easily fix. I do understand most people are not that confident and need a shop. I can replace every part that may ware out with proven Shimano gear for $100. Lower bracket, crank set… that’s still only $300 total invested. I would have to rebuild it 10 times to cost as much as my giant revolt. Also I can replace the shifters for $16 so again they would have to brake many times to add up to the $1400 I paid for the my revolt.

Let’s be clear the components used on the Kent were top quality back in the 90s and it will hold up indoors. I put thousands of miles on equipment just like this back in the day outside with only yearly maintenance. The only things that makes the giant better, are only things that will matter if you take it outside. I stress this, if it’s for indoor use it will hold up much much longer.

For outdoor use the Kent has issues. The external cables will rust. The hubs are not sealed, the head uses old style bearings not taper. It’s much heavier than my Revolt. Otherwise the giant is not any better for indoor use. These few little differences is what makes the Giant Revolt a bike you can use in any weather for years and only wash it. The Kent will have bearing issues, head bearing issues, lower bracket issue… over time if used outside in poor conditions.

If you can do the work, then definitely you’re ahead of the game, yeah. And being able to identify decent parts from bad parts is another benefit (and another place where the average buyer will run into trouble with a Walmart bike) for sure. The number of bikes our shop had brought in for service that had shot-to-heck off brand drive trains was high. But you’re right about the weight–a lot of what makes a good outdoor bike is that it doesn’t weight 30lbs, lol.

The one thing I’d point out is to keep an eye on those cables and shifters even with riding indoors. You might be surprised how quickly sweat and indoor humidity can corrode things.

If you’re ok at maintenance then i’d much rather get a decent second hand bike that needs a bit of love than a cheap bike that’ll never be very good.

I will take the advice on the cables and pull them and coat them in slick honey. Might prevent rusting. I do live in a high humidity area so…

I completely agree with a nicer used bike over a Walmart bike. 100% agree. However I have not found a decent second hand bike for a good deal that will fit me. That’s the issue in the used market. If you are average height you won’t find much. The used market is really tough at the moment and has been for years now. A used Revolt is around $1200. A used steel framed 90s road bike with decent running gear and modern shifters is way more than this Genesis. But I do agree if you can find a used name brand bike for a good deal it’s better than Walmart.