"a brand new course set to be revealed in the coming weeks."

In case you missed it, hidden in a very recent Zwift press release about the esports world championship in February it was stated that:

“A similar three-race format, designed to prove the ultimate all round test, will be used for the 2023 UCI Cycling Esports World Championships in February on a brand new course set to be revealed in the coming weeks.”

I guess we are free to speculate on what this new course will be. A new world? An expansion of an existing world? When will the world be released? January maybe so racers can practice on it first? Or will it be held back from public use until after February? 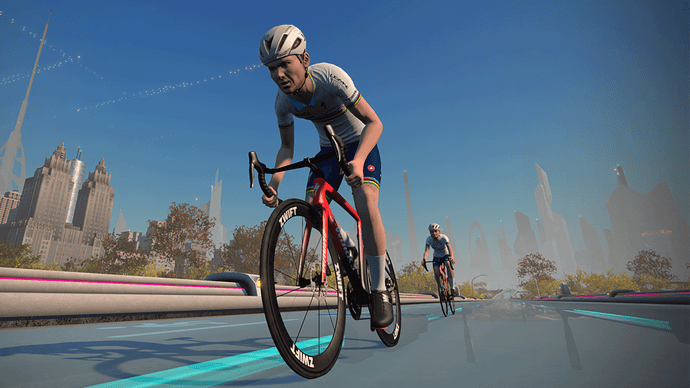 could just be a new route on an existing world?

A Watopia expansion would be ideal.

Are we going to access to Alpe Du Zwift and Ventop downhill, that have been listed on the Zwift Preferences hack tool for months?

Just checked and there’s also a “WBR climbing series” route listed too in Watopia, that I’ve never noticed before (I wouldn’t win the Krypton Factor observation round).

My feeling is, they have been used to test pack dynamics privately, rather than a downhill course?
I have the same thought on that gravel world… Was used to test rolling resistance on sand etc

The Punch (one men’s and one women’s race) will see the 100 riders of each gender at the start a 13.8km race over rolling terrain. This first race will be crucial, as only the top 30 will qualify for the next race, with the rest being eliminated from the competition.

The second race will see the remaining 30 riders (both male and female) start The Climb. Also in a short format, The Climb will consist of hill repetitions on a specially designed hill climb, with a total length of 8.5 km and 162 m of vertical gain. Only the top 10 finishers of both categories will advance to the next stage, The Podium.

The Podium will take place on the last of the three new circuits containing short, challenging climbs, and will see riders fighting for position, as one rider is eliminated through each archway until three riders remain. These riders will then battle it out to the finish in a bid to win the title of UCI World Champion.

Am I right in saying, those courses dont match with Roule Ma Poule, Innsbruck reverse or Crit City?

That sounds very similar, but not the same as Grand Central, which is 6.8Km and 137m of climbing.

on a brand new course set to be revealed in the coming weeks.

That sounds very similar, but not the same as Grand Central, which is 6.8Km and 137m of climbing.

Zwift will want to use all the publicity opportunities they get from hosting the Worlds.

So I expect it’ll be part of Makuri, since that’s the most graphically good-looking world.

will take place on the last of the three new circuits

hmm, i dont believe the posted routes are new

No, they do not match Roule Ma Poule, Innsbruck reverse or Crit City. Those three existing routes were used in the qualifying races I believe.

There are three new routes/courses/circuits coming for the final championship races in February.

Sad as it is to admit these could well be new routes but on existing worlds rather than some new roads.

The Punch, 13.8km over rolling terrain. The best fit for that would be Titan’s Grove. There’s not many other places in Zwift that have what I would call rolling terrain.

The Climb. 8.5km and 162m gain hill repetitions. Not many places in Zwift were you can do short laps over a hill. The best I can think that would match would be the New York climb where the route could loop around and repeat the climb as many times as required.

The Podium. Short, challenging climbs. I guess the end of Richmond fits that description. Again there’s not many other places in Zwift that have a series of short climbs close together. Mind you, 10 riders will start and one will be eliminated until 3 are left so they need to squeeze in 7 elimination arches along the route. Plus, I think Zwift already has routes for the short Richmond course.