Thought you all might like to read this broadcast trade publication story about the relationship between race organizers (not just ASO, but others too), broadcast networks, and their downstream partners.

It is reassuring to know that the people creating the live shows are invested and committed to the long-term growth of women’s pro cycling.

@shooj: Regarding the Tour de France Femmes avec Zwift, I have noted that the ‘standard torso’ used in the broadcasts to show the jersey winners is, well, not very representative of the athletes in the race. I’d say it actually looks more like a real-world representation of the Zwift avatars for women, which have been mentioned before as not being terribly representative.

Just wondering if you have any channel through which you could run this up the chain of command to see if the ‘stock torso’ could be changed. (Unless, of course, I am in the minority in my view.)

I know what you mean, Nigel. Unfortunately, this seems to be ASO’s graphics team’s doing. It’s equally unrealistic on the men. I’m guessing they got some non-cyclist male and female models to pose wearing maillots and then worked with that. They’re surely trying to make the images as appealing as possible to the mainstream audience.
Just to illustrate the point, here are some hastily screengrabbed shots from stage 5 of the men’s TdF and stage 2 of TdFFaZ (trying to avoid spoilers for anyone not up to speed). 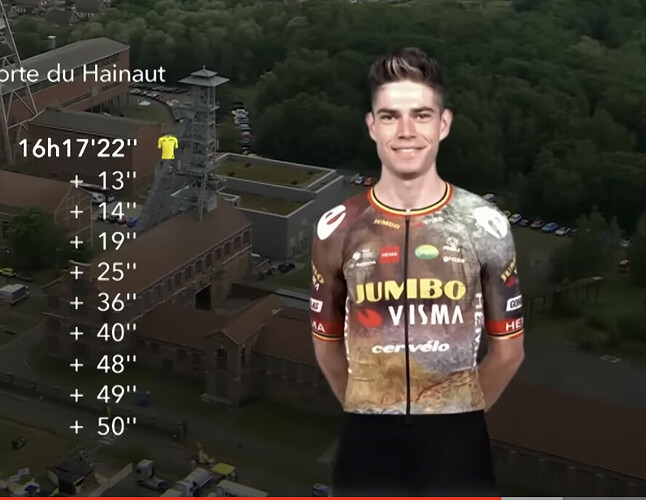 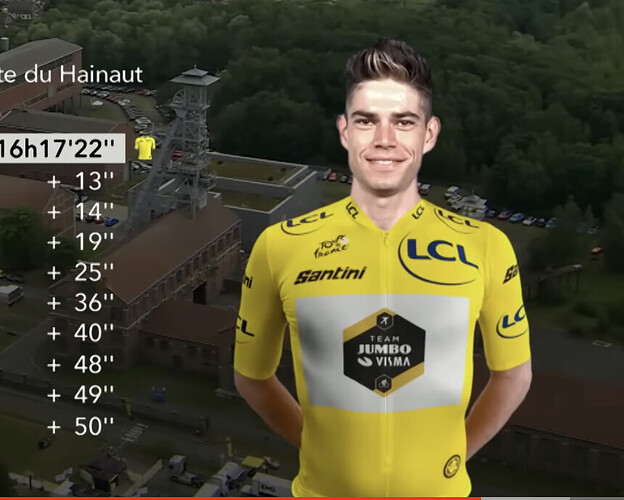 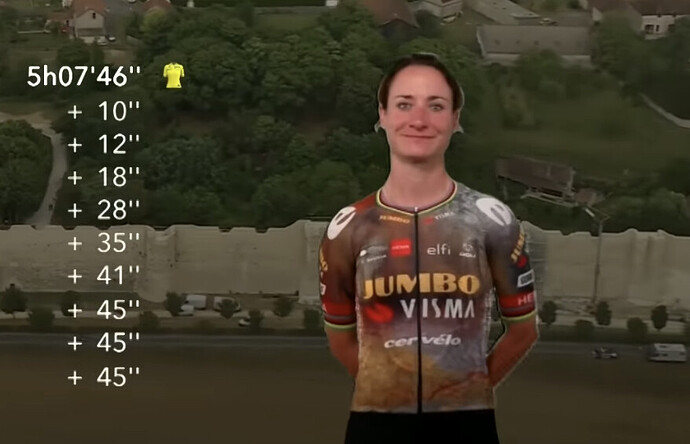 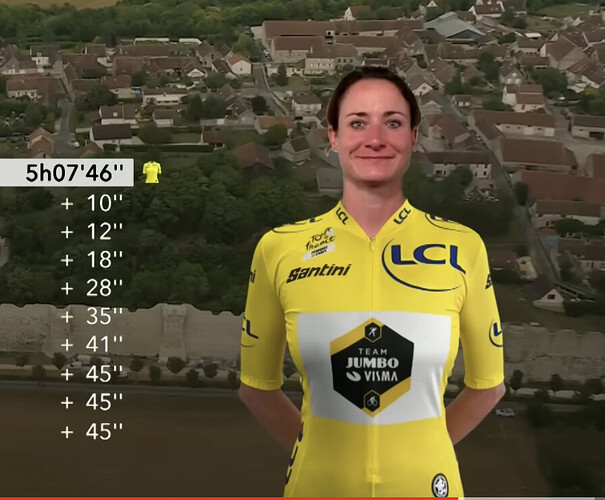 Yup. bad for the men, too. I was just hoping that Zwift might have some influence at least on the women’s side since they are a sponsor. If they can take care of the issue on the men’s side, too, that would be great!

Forced to watch the few minutes long highlight YouTube posts as the local cable is not showing the race in SoCal on any channel. They also cut the first stage finish for women and the mens final podium ceremony. That was just bad actions by the regional selected channel broadcasters.

Her interviews are always great. (I just wonder how they transcribe the bilabial trills…)

Correct, it is ASO cutting off the start of the coverage. On GCN+, a couple times they’ve mentioned what’s going on from the studio and said that they’re not permitted to show it until ASO says they can start live coverage.

Thanks for the share! Very interesting article. Seems like in Europe and UK, a lot of extras are going into the production around the 2 and half hours of race footage. Unfortunately, I haven’t seen anything like that in U.S. Peacock production. There no before or after Breakaway programming and certainly no Manon Lloyd. Could be in part that road cycling overall is just bigger in Europe and UK, and US broadcasters think there’s a small audience for men’s cycling and and teenie weenie audience for women’s cycling. Maybe be we need a Netflix Formula 1 style docuseries to bump up the perceived marketability over here🤣

Very disappointing that CNBC is only showing the first and final stage of the Tour De France Femmes. Was really looking forward to watching.

If your finances allow, you might consider subscribing to Peacock Premium for just one month, it’s $4.99 and easy to cancel as long as you set a reminder on your phone.

Edit: if you have a smart TV, Apple TV or Roku (etc) you can load the Peacock app and watch on a TV screen.

Funny you should mention this because Netflix is making that exact show. From what I understand, the same production company that makes the Formula 1 show has been following certain (men’s) World Tour teams all season. Teams participating in the production are mentioned here.

i mean what the hell were you expecting from nbc/cnbc? they barely have coverage of the men’s race either. it’s either heavily shortened where they pick up the coverage halfway through the race or they pre-empt it for nonsense golf coverage. on any given stage you get to see perhaps 30% of the race when factoring the late starts and the endless commercial breaks

Is it just me, or is the default torso for the jersey wearers different today?

If your finances allow, you might consider subscribing to Peacock Premium for just one month, it’s $4.99 and easy to cancel as long as you set a reminder on your phone.

I’ve done the UK equivalent - subscribed to Eurosport for £6.99 a month. Basically £1 a stage.

Is it just me, or are there more crashes in the women’s tour than the men’s and are they more severe? If so, what do you think is the cause? Some are just really poor mistakes like a team car hitting their own rider, why the heck was the driver so close to the back of the peleton??? Dismounting your bike into traffic and knocking another woman off her bike, not seeing a crash ahead of you and plowing into them at full speed, etc…

I’m trying not to sound like a misogynist here, so please don’t @ me. Genuine question. Is the tour de France just a larger field of women, going faster, on narrow roads the majority of the cause? I don’t follow a lot of women’s road racing, it just isn’t broadcast in the US, so this is really the first women’s race I’ve seen.

I don’t know if I would say there are “more” crashes (numerically speaking), but it is definitely my observation that the crashes that occur are, overall, more severe. I am guessing that this comes down to a number of factors, though, so it would be hard to isolate ‘a reason’. Some thoughts that I have, though, are:

There are likely a number of other potential reasons. And, at the same time, I think it is very important to note that the state of women’s racing has been increasing rapidly over the past few years as more money and exposure are coming into the sport, which is fantastic to see. And the skill levels of those at the higher end (likely those who are able to make an actual living by riding a bike) is pretty amazing. Seeing only one rider miss the correct route at the end of today’s TdFF stage, while everyone else completely avoided the rider, was fantastic. Watching Ceclie Uttrup Ludwig change out her rear wheel, seemingly as quickly as the team mechanic could have done it, during yesterday’s stage was amazing, also. Personally, I am loving the TdFF. Women’s racing is just continuing to get better and better. Will it ever be like men’s racing? Doubtful. Does it need to be? Nope. Will there continue to be crashes? Most definitely! Will they be (or at least seem) as frequent or severe? Most likely not.

Another thought I just had, with only 8 stages for the women they need to fight harder during the entire tour to keep in good standings in the GC. I read that the men’s tour typically sees the majority of crashes in the early stages as they contend for GC, as the tour goes on they chill out and settle into their “roles”. The women really don’t have that luxury with only 8 stages, hence bigger groups going faster and taking more risks.

Thanks for your insight @Nigel_Tufnel!

Oh, and that wrong turn in the final 500 meters today was such a shame. Surely the DS on that team would/should have warned them about that! And where was the course marshal to help direct them to the finish?

And where was the course marshal to help direct them to the finish?

Definitely a shame. It would be interesting to know what the communication was there, and if the rider had removed, or was having trouble with, their radio/earpiece.

As for the course marshals, in the replay I thought I noted two people pointing/waving to the correct direction, but that that point in the race something a bit more obvious would certainly have been helpful.

Looked like someone had just gotten off their motorcycle and was pointing her in the correct direction, but was no where near the entrance of the pull off meant for team cars. He should have been on the left side of the entrance closer to the main course to point them towards the finish. Lesson learned I’m sure!

The two guys in the orange box in the screengrab below are who I noted (but only on replay). But look at the yellow circle. Why would anyone EVER think this was a ‘clear’ set up for which way to go? The zig-zag in the barriers is a complete mess. 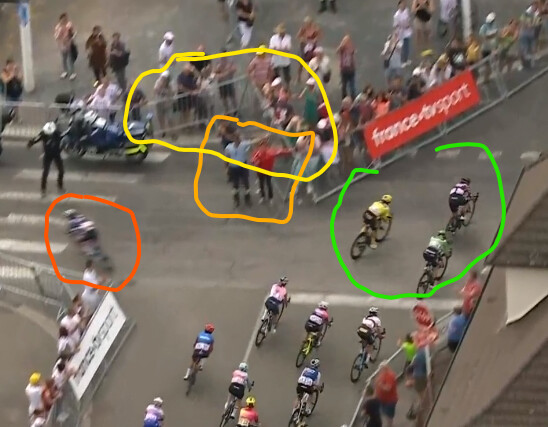