So my kids want to ride on zwift and both have 24" wheel bikes, but I can’t seem to find a smart trainer that will support that wheel size. The Cycleops M2 says it is not compatible with their extender for 24" wheels, even though it looks like the same frame. I’d have to see if the width of the rear wheel would support a QR and could fit on a direct drive trainer. (I happen to have an older Genius collecting dust in the closet and was trying to leverage that but Tacx has no converter, and I really don’t want to hack it up…

I’ve found some web resources, many hacks, but at this point, one would think it shouldn’t be that uncommon.

For those that have kids ‘playing’ on zwift, what are your setups and how have you made it work?

I understand there are some small frames for 700c wheels, but then there is the crank length issue to deal with.

Welcome thoughts and ideas, thanks!
-P

I’ve got a Tacx Flux and I’ve hooked up my kids bike with 20" wheels (quick release) without any problem?

Did you swap cassettes? Or is it dedicated for your kid?
Good to know a wheel off can work though.

I was of the understanding that they were going to fix the weight issue if they hadn’t already. Either way, it would be usable.

I suppose I could sell the Genius and pick up a direct drive as a potential option.

I have been using a Bike Friday Pocket Companion on a Saris/Cycleops Fluid 2 with the 20” wheel adapter where it has worked very well. I just upgraded to a Saris H3 with the Bike Friday. For the H3 I needed to use the Saris Climbing Riser Block to level out the bike. For the kids bikes the Fluid2 with adapter and sensors should work for you. I think one of the other trainers Kinetics?? also has and adapter.

Thx. Yep, Cycleops says their extender will work with the Fluid and a couple other non-smart trainers, but for some reason not their M2 Smart.

My Bike Friday folding bike has a typical 8 speed cassette so I was able to mount on a Saris H3 without any issue. The only addition was the Saris Climbing Block to level the bike. For the Fluid2 it works with any speed cassette. For awhile I had an old standard road bike with a 6 speed cassette on the Fluid2 before getting the adapter. Saris has made it very clear 8 speed cassette is minimum for the H3. But any cassette down to single cog should work with Fluid2.

I think the kids 7 speed geartrains are a whole different beast unfortunately.

I talked to Cycleops/Saris today - support couldn’t say what the issue was, but just stated incompatible, even though it was the same frame. I’m debating on taking a risk and trying it and hacking to make it work if necessary.

Seems like with the lack of responses, this is not a common enough request…

I modified a cheap dumb trainer, adding an additional bracket to lift the resistance unit to meet my son’s 24" wheel. If I was doing it again, I’d look for an Elite Qubo, as they are gravity-weighted onto the rollers with a “swing arm” rather than a fixed axis that won’t reach the rollers.

Re the 7-speed, I think it’s because they use a different freehub. My son’s has an 8-speed Claris gruppo and I’ve had no issue installing his cassette on my Kickr Core for a test.

Thanks for the replies!

I saw something similar to what you did in a blog (maybe it was yours?!)

The Qubo reminds me a bit of the Bkool trainer. Still a little concerned that with a smaller wheel it would put it in a higher contact point and I can imagine potential issues, but maybe I’m wrong.

Yeah, the 7 speed is going to be an issue that I just won’t be able to get by without replacing the group… Heck, the hub doesn’t even have a quick release, so no sure what the width is and how it will be held in a trainer.

Starting to wonder about small (44cm) 700c wheeled bikes now for this experiment. Then I can just just my old Tacx Genius and be done… Any thoughts on frames there?

Yes, they’re a similar idea, but two things would put me off Bkool. One is I read a lot about bluetooth issues (and my son uses an iPad for his screen) and the second is they’ve sold the hardware off to another company whose name escapes me right now. The Qubo however, is sold as being compatible with smaller wheels so should be OK…

I’ve seen a few kids’ CX frames from the UK that use 650b and 700c wheels, which would be very handy, but didn’t come across any in Oz. I did toy with looking for a 44cm frame, but he only got the 24" TCR for Xmas (who knew it would be relegated to a trainer back then?!) which he’s very proud of, and I figure he can use the dodgy trainer until he grows into an old 48cm frame my wife used. I also didn’t want to confuse him as the TCR uses Microshift levers which are more like the Campy mechanism (has dual levers behind the brake). I figured if I have him using Shimano on the trainer but the micros on the path/road it may lead to trouble …

Yeah, I know about the bkool stuff, friend of mine has one. For this it might be ok, at least it is a complete smart trainer solution, but the Qubo isn’t smart.

I was looking at the brand name prices for these bikes which would last kids a year or 3 if you buy early and are lucky and we are close to 1000USD. I have wheels I can throw on a 44cm that takes 700’s, but if I could find a 44cm frame, I’d just build something for indoors. I pinged manufacturers on alibaba and no reply. I have dealt direct with these companies, but ever get replies via that site.

The only issues I have with getting a 44cm is getting the right crankset. Small cranks seem hard to find, I have to see what lengths are on theirs now. This path seems to be more work…

Thought I’d share a good option for 24" bikes. We got one of these: 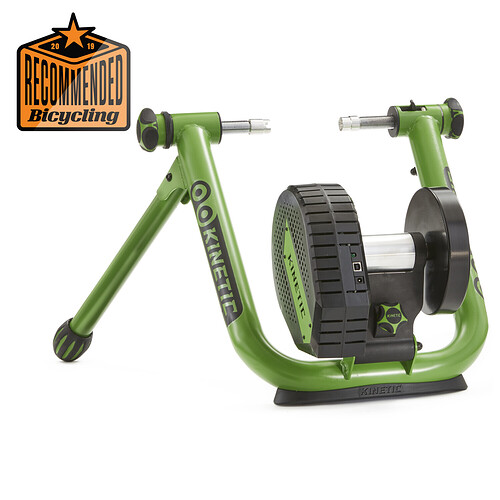 Works great and did not require an adapter for kids wider 24" tires. If using narrow tires on 24" wheels, may need the small wheel adapter. There are caps that are needed to replace the QR ones if your hub doesn’t have QR.

Found used ones on ebay, but you can get them direct from Kinetic and currently had free shipping. (Apparently I caught it on sale for 399)

Nice thing is that as kids upgrade their bikes, this can stick with them…

Figured I’d share for others that were in the same boat.

I’ve got a Tacx Neo 2T and I’m looking to buy a 20"-wheeled bike for my youngest son, who’s expressed a desire to ride on Zwift. We’ll probably be getting him an Orbea MX 20. Of course, the question is whether the frame is going to foul on the body of the trainer. Does anyone know whether it’s going to fit? 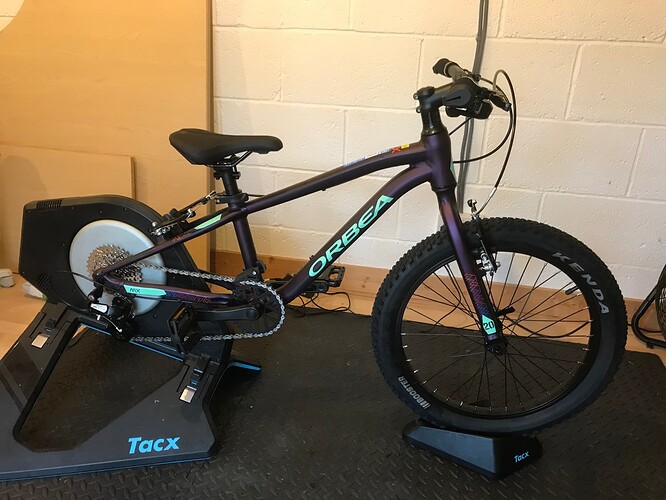 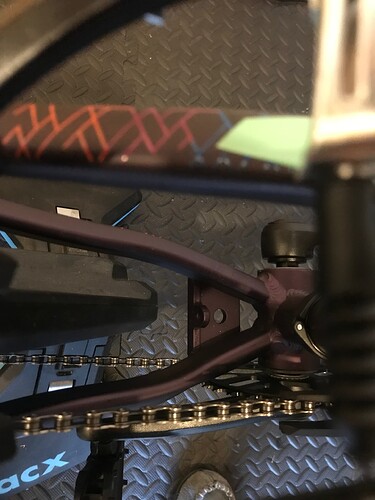 Interesting, been thinking about maybe getting a 20" wheel folding bike and wondered if it could fit on my Saris H3.

Steve, I have my old Bike Friday Pocket Companion 24 mounted on a Saris H3 for the past couple of COVID years. It has worked fine in Zwift and FulGaz. Just required getting an 8 speed cassette to match the one on the rear wheel. Only addition was a Saris Climbing Riser Block to level the bike.