@James_Zwift or “To whom it may concern”…

Is there a published and regularly updated table of RoboPacer/PacePartner routes?

I maintain a monthly “megathread” of resources, the current one being: Zwift Resource Megathread - October 2022 🗺

At the top of that, in the “READ THESE FIRST” section, I’ve linked to the current game and companion app version post which is regularly updated by @shooj .

I’d like to link to an up-to-date info page on the bots, showing W/kg and route details.

I do want to try and do this, but “day job” is extremely busy right now.

I hear you James. This strikes me as something that needs to be automated behind the scenes - it’s onerus to require manual updates every time it changes.

Maybe there’s an API that could be used? (or some way to scrape the data)

With the increased number of robopacer and more variety in their routes, I find myself looking at the route of multiple robopacers when picking which one if any I’d like to ride with that day. At times I’m looking for a specific route to ride and if a robopacer isn’t on that route, I’ll then look for a group ride.

There isn’t anything like that sort of functionality built into ZCA because these rides aren’t events - it is just a free ride.

Not saying it isn’t a good idea, just adding some perspective.

I’d like to know where the robopacers are so that I can avoid them! It would be great if you could turn them off if you have no interest in them. I’ve never seen anyone run alongside them either - I wonder if stats have ever been collected to see how popular they are.

Edit: This is my view as a runner with robopacers, they may be useful to other runners or cyclists

Wow. Can’t say I’ve seen one of them. Do they glow too? Or do they, like me, tend to wear all black while running on the roadside?

You know what? I have never seen them either!

Routes
They will run on the following routes, rotating weekly:

OK, that explains it… they’ve got their own routes.

Yes, they glow and there are a bunch of them. The two reasons that particularly annoy me about them running on the May Field. Such a small loop for them all to be running circles around together, it looks ugly and cluttered!

Learn which RoboPacers are riding where!

Understandable. My secret is that I don’t much like the glow of the Tron bikes, and I wish I could turn it off in my own view. The cycling Robots are few and far enough between that they don’t get cluttered, but the Tron bikes can and do. I feel your pain

Update: I just googled pics of the running robopacers. They are terrifying. The new PR holobots already look a little like my soul leaving my body when they appear on screen (and I like those). And the cycling pacers don’t bother me.

But for some reason the running pacers look like terrifying uncanny valley ghost horrors that are chasing after people to murder them.

Just wanted to say that. 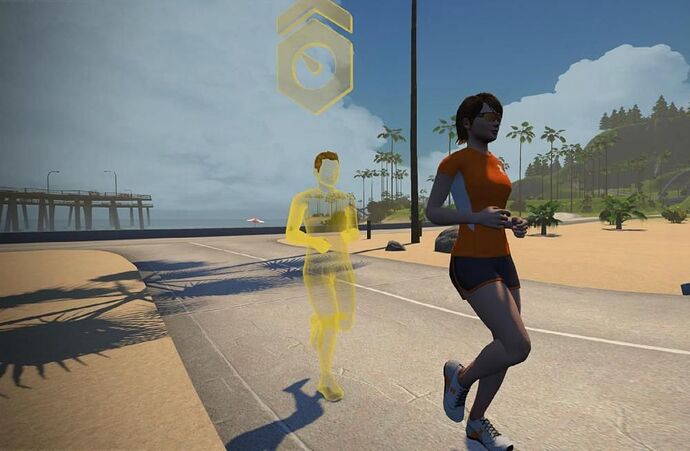 I found a good screenshot in my activity which shows what it’s like with all the robopacers running circles. Very busy on screen and… luminous! 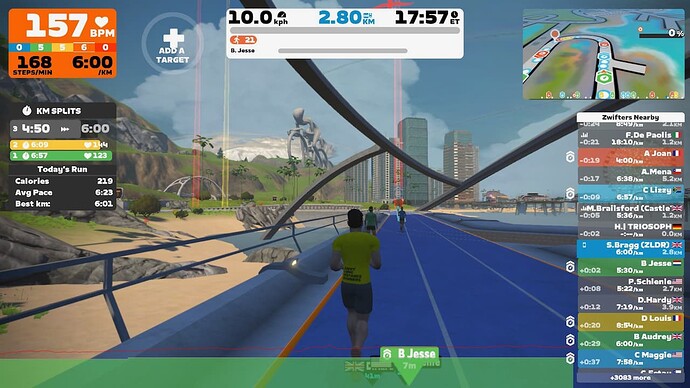 At least runners don’t suffer draft effects when groups pass each other… This was interesting to witness amongst the cycling robopacers and what it did to the groups involved.

I have (checks Companion App) a whopping 2km and 14minute of running in Zwift. I think if I had regular access to a treadmill though, I’d probably use the pacers a bit.

On a bike, you’re whizzing along at 30+km/hr (especially with a PacePartner RoboPacer) so you get to explore a lot. I imagine running would be a bit more tedious and the bots would add some dynamism.

Oh man, I’ve been in one of those groups! Likely D.Maria or Miguel, we got passed by C.Cadence and were “sucked forward” in their draft. (at least that was how it felt)

I use it quite a lot. Running on a treadmill is boring. Zwift makes it marginally more enjoyable with the HUD off.

You can use a bit of a hack to automatically change the treadmill gradient. If that was baked in (no need to pretend the treadmill is a bike) it would be better still.

I only bother running solo. Anything with groups just seems a bit pointless.

I suppose I could Google, but can you run in Zwift by using a Garmin foot pod? I have in the past found myself on gym treadmills, and generally need some kind of distraction for them not to be horrible. If Zwift worked with my foot pod, that would be a solution.

Each to their own! I get my kicks out of running, but not cycling. It’s all thanks to Zwift though, as it makes treadmill running fun and I’d find it very boring without it.

Back to the pacers part of this discussion… I think they’re more pointless for runners. Surely if you want to run at a set speed, then that’s the speed you tap in to the treadmill. I see no point in running with a bot - I’d rather run alongside avatars representing real people with a community spirit, which is what Zwift is all about, right? I’d prefer pacers where optional like they used to be, by selecting to run with a pacer.

That’s my view on it as a runner anyway. I’m interested to know the views on robopacers from cyclists though. I’m guessing they’re more useful because you have to speed up and slow down to stick with them to meet targets (unlike treadmills where you set a speed and just keep up with the belt)