Only getting Draft powerups

I just did a couple of short rides. Out of four(?) powerups total, every single one was the Draft truck.

Now of course this could have been pure chance, but I’m suspicious given the history of randomisation of powerups having issues.

I NEVER get anything other than the Truck, Helmet, or Feather with the Truck and Helmet dominating my powerups. Not very random in my estimation.

I NEVER get anything other than the Truck, Helmet, or Feather

That’s what’s meant to happen (plus XP) unless custom power ups are set.

I have been Zwifting for over 5 years and have NEVER seen + XP!

ZwiftInsider has a chart on what they believe the distribution is for powerups. Article is a few years old so not sure if it is still accurate. 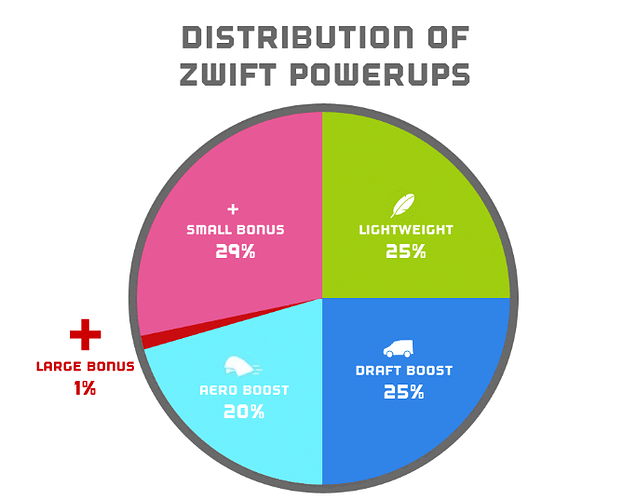 but this also reminds me of an old Dilbert cartoon:

Zwifting for over 5 years and have NEVER seen + XP!

It adds XP and then disappears, maybe that is why you’ve never seen it?

Possible, but I have been testing the distribution casually over about the past year and haven’t seen any + XP bonus points awarded. I also track my points in an xls and check against my mileage which suggests I haven’t received any bonus points.

FWIW: The XP bonus is only 10 points, so you likely wouldn’t notice it unless you did a route with lots of arches. You might try watching the screen at every arch for a while, though, to see if the +10 XP (a small plus sign) flashes in the Power Up circle for a few moments. I would guess that if you don’t have a PU, then you go through an arch and you still don’t have a PU, then you got the 10 XP.

Ahh, thanks for that. Was wondering how many XP bonus points were awarded. Appreciate all the info surrounding this rather trivial topic but I have been curious about it for some time.