Today I completed the Zwift Duathlon scheduled at 21:00 CST. At the completion of the ride stage I was 16th for males, which is correctly reflected in the final results on ZwiftPower. I completed the run stage in 6th, with 2.16 miles in 15:00 for an average of 6:57/mil. However, the ZwiftPower results show me 18th.

As you can see in the first screenshot I was in 6th with 2:09 remain. The order of runners in the first screenshot is how the run stage finished. When you look at the second screenshot, you can see the Time and Pace results are jumbled and the finishing order does not reflect the order in the circled section on the right side of the screen. Furthermore, none of the top 8 finisher shown in the results popup window finished above me according to list on the right side of the screen. There are several other runners mixed in that did not participate in the race, and if you remove them from the list, the order of the remaining participants from the second screenshot match the order runners in the first screenshot. 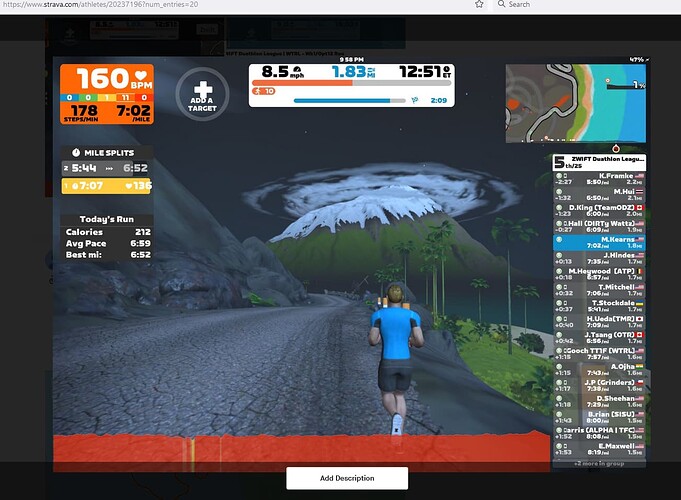 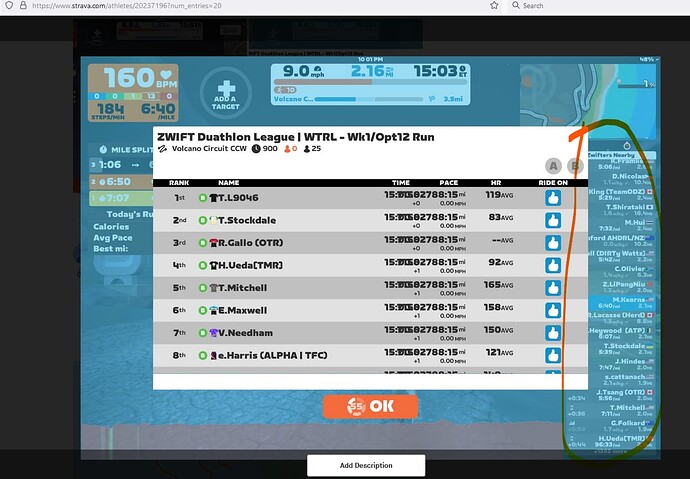 The details on ZwfitPower do not show the distance covered in each stage by each participant, making it impossible to validate the results. I had consider that the run results are the aggregate results from both stages, however, based on my ride and run distance, the results would still be off.

I believe the result of the run are incorrect and was hoping someone could take look into what’s going on.

Thanks for your help

Results are in a 3rd party system… 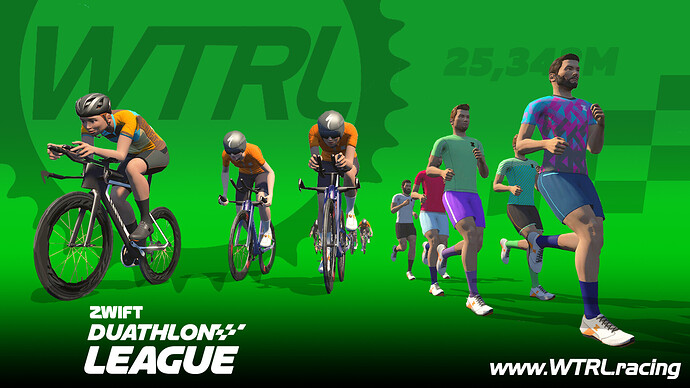 How far can you bike in 35 minutes and run in 15 minutes? www.wtrl.racing.

The Duathlon results on ZwiftPower have never reflected the actual distance covered. ZwiftPower treats the 35 minute cycle and 15 minute run races as if they were group rides and runs and the results are a random list of finishers. As far as I know this has always been the case. ( I think at some point I read somewhere that this was going to be corrected but have never seen the change made)

The link provided above will show you that you
Rode 21.16km
Ran 3.463km
And will show your overall positions relative to everyone else and also by your age category.

I will note that despite these being time-based events (which should be counted as “group rides” in ZwiftPower) they are actually treated as races. You’ll see in the results that people are getting ranking changes based upon these random-order results. I myself got a gold on ZP in the race this Wednesday despite turning in a woeful performance (20th out of 27 riders, I believe) and shot up in the rankings because ZP believes I “beat” several A and B riders who in all actuality finished several KM ahead of me.

Yes certainly incorrect ranking points being awarded, again, for this series. Ranking points used to be given until it was pointed out they were completely wrong. Zwift put this right for last series but looks like this new series has been set up incorrectly.

Possibly @James_Zwift can decide if it is worth correcting these either going backwards this series or going forwards.

As you are possibly aware current ranking doesn’t really mean much at the moment, other than personal pride, but work is being done by Zwift to make Race Scoring/Ranking much more important and relevant in the future.

Duathlon results should be on the WTRL site.

Would have a look, but im sat in a hotel in Long Beach and the WiFi is priceeeeeeyyyy