Zwift branding getting it wrong… with the new font (a letter lost in this forum from a user, but also designer)

it looks like 2wift to me
and I thought I was doing 700 watts with ease.

the overlays for these headline events always were a bit separated from the game as in they took the game image feed then overlaid the extra rider stuff.

Yep, for sure. But elements of the font being used in the GP coverage are the same as the new in-game font. Some others don’t look the same - the R for example as Jonas said.

I think the options are, the GP font is:

I guess we’ll find out. But if they have this version available, I feel that it would be the one to use in-game (at least in comparison to the one that is in game).

100% agree with the OP and can’t believe how many people are completely missing the point. If you want to make a “comedy” font for your trendy new cafe sign, fine. But for things like Zwift, you are trying to communicate key data (such as power) quickly and clearly, and reducing cognitive load. When you’re at 95% of your max heart rate you don’t give two damns how pretty the font is, you just want to be able to see the data clearly.

Take a look at fonts used where legibility is critical - anything from instruction manuals to airplane cockpits and industrial control panels and people aren’t dicking about with amusing fonts, they’re simple and readable. That’s the basic point so many people are missing. Its literally irrelevant whether you find it “pretty”, you’re probably just pootling around at 50watts chatting to your buddies. For people trying to use the platform for racing or serious training, not being able to read on-screen data clearly and quickly is an issue.

TBF it’s an “issue” only for the first few sessions. After that it’s instantly legible.

I really envy people for whom that terrible font is “legible”, unfortunately I’m not one of them. And it’s still terrible after many rides, really spoiling the experience. My HRM is actually showing short spikes when I look at my numbers and think for a brief moment: “Oh my god, I’m doing 730 Watts - what the …?!?” - and then I’m slowly pulled back to reality. This happenes to me all the time and is just totally unnecessary.

This happenes to me all the time

I’m often wondering whether I’m doing 57% of FTP or 322% of FTP. If only my legs, heart and lungs could find a way of letting me know.

You really can’t tell, without a display in front of you, the difference between 730 watts and 130 watts?

I can’t tell the difference between 151 and 157 without a display in front of me, if that helps.

Until there is the ability to select the preferred font in the menu/settings, I think Zwift should roll this one back. Let’s get my bias out of the way first to avoid people straw-manning my position: I don’t like the font. I think it is hokey, does not really match the premise of the game, and doesn’t really provide any value to me as the rider. BUT, just like everything else that changes, I can simply give it a passive-aggressive eye roll and move on with my life saying nothing more about it. However, this is not a matter of taste or “majority rules.” ignoring people who distill the argument to the 1 vs 7 debate of 2022, the new font has a readability problem, especially for those folks using smaller/mobile devices. Even on a 60" screen using PC, I have noticed the time it takes me to read the new font is noticeably slower. This may not seem like a big deal, but when you are doing a hard session, you want to be able to know what is being displayed to you on screen at a glance. On-screen workout prompts are much slower to deliver the message in that regard, even after some time getting used to the new font. The spacing and character edges do not seem to generate good flow for people used to reading more normative characters.

Bias 2, my vision is impaired, even corrected, I don’t see 20/20, and I very frequently will find my own workarounds, not expecting the software to be built around me sitting at the tail of the bell curve. That said, I’ve never needed to make any adjustments with Zwift. I’ve always found it highly readable, even using a tablet while at the gym for running. Sometimes the smaller print for KQOMs and the athlete list get a little tough, but the HUD and prompts have always been satisfactory, and that’s my primary need. With the newer font, it becomes substantially more difficult. My eyes struggle to focus to begin with, and reading the new font has become appreciably more difficult at the smaller size. I probably would shrug that off as a me problem, and resign my self to test other resolution settings on my device; however, seeing so many people share this difficulty, and knowing how prevalent presbyopia is in people over 40, it seems to me, that Zwift should forego style for function.

Even if I loved this new font, if there was a substantial segment of the community whose experience was significantly deteriorated, I would err on the side of the old font. My personal taste or enjoyment does not supersede the utility and usability for others. Sometimes this community seems like it is willing to die on REALLY small hills, digging their heels in, creating caricatures of the opposing position. Try instead to take a rational position. Some people are having a hard time, it doesn’t make them “stupid” or reprehensible. Equally, some people like the new font, those people are also not stupid or reprehensible. But in weighing the two positions, it seems the loss for one side far outweighs the gain for the other. It’s not particularly hard to be conciliatory on something like this.

I can’t tell the difference between 151 and 157 without a display in front of me, if that helps.

Hey!! When I’m sand bagging and trying to rip the legs off C riders, this could really matter.

You should try to keep two digits HR. Take it easy!

That has always been the same for me. The latest font change hasn’t made it worse

Nah, I can definitely tell the difference between 151 and 757 without a display! 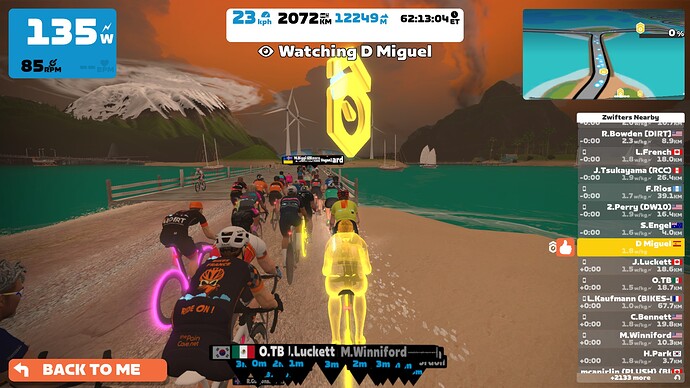 As Daren had spotted in the ZRL broadcast.

I think the base is too wide

I think ditching the curly bit at the top would have been better.

Having said that, the old one was fine for me and the new one is ok too, I’m not overly moved by either of them.

I haven’t had a chance to ride since the update, but my guess is that by adding the base it makes the 1 more width-proportional to the other numbers, so that there is less expand/contract while riding.

In the riders nearby table it looks fine like this, but in the top left panel it looks a bit too wide to me. But they’ve made it roughly the same width as the other numbers to restrict the horizontal movement so can’t have both.

Nigel beat me to it.