Zwift branding getting it wrong… with the new font (a letter lost in this forum from a user, but also designer)

This is everything that is wrong with the world in one sentence.

alright, now get those % do it with the user base… how much are we? if we were 1 million (… it’s more, ok. much more), those are 330 thousand people. if you don’t mind 1/3 of your clients getting bad experience for this pure aesthetic-over-function decision, you need to review your priorities…

i’m sorry, but it’s not a cute/ugly, irrelevant, abstract problem. it’s a very harsh problem. ole-kristian up here is completely right and there are many solid and practical evaluation on brand and UX processes that guide this type of choice… and there’s nothing to do with taste.

we didn’t need to be discussing the font, people have much more meaningful subjects that could be really performance/experience-breaking problems. if this is happening, it’s already an issue.

liked or not, the old font wasn’t problematic to the point of being discussed this much in, like… 5 years?

we didn’t need to be discussing the font,

We have a lot more heated debates on here about less that the font. LOL

Do you remember when the Zwift logo changed.

Do you remember when the Zwift logo changed.

We might actually be OK with it if the characters weren’t constantly changing widths, which is very annoying.

I haven’t ridden in Zwift since the font changed, but are you saying the numbers move left and right as they change?

If so, that’s even worse from an accessibility perspective.

The old font was proportionally spaced, too. It hurt readability, particularly when scanning down a list.

For example, in this screenshot the colons and decimal points don’t line up vertically: 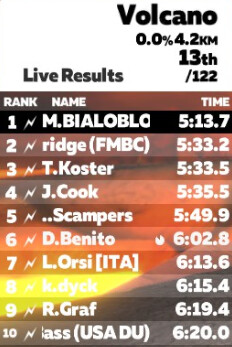 Even in a proportional font, digits are best when they’re the same width as each other.

That is correctly. The spacing, or rather the width of any multiple character number, changes along with the characters. So, for example, 111 is much narrower than 222.

I have two main issues with the new font.

Return to Zwift’s Old Font with this Hack (PC/Mac)

Thanks I will give it a try. Give me the old font. Crazy you can’t set font within Zwift should be option.

The variable width font is terrible, especially for the watts display. It always moves the left digits.

A PC/Mac hack is not a solution. It does not address the problem for tablet, phone, and AppleTV users.

I can’t read either font without putting my glasses on so not much has changed for me.

We have a lot more heated debates on here about less that the font. LOL

oh, gosh! that sounds like the dev and support teams have their hands full… probably we can rest assured that they won’t waste time fixing something that wasn’t broken through all the platform’s ecosystem to the point that people will even create a hack to try to fix it by themselves.

It gave me a headache so yeah it stopped me from riding.

Your [Zwift branding getting it wrong… with the new font (a letter lost in this forum from a user, but also designer) post is very clear and informative. Have you thought about turning it into a blog/Linkedin post or sending it to design/games titles for publication?

lol
not even crossed my mind… just caught me off guard seeing a huge game system like this be, at the same time, so conservative on evolving its visual language and careless with something so essential to it.

Watching the Zwift Grand Prix coverage, it looks like the 1 has been modified.

There’s a bar at the base, and it’s now the same width as other digits I think.

I don’t know if this is in game yet, but it’s an improvement. I do still think the gap between the digits and the decimal point is a bit wide, but overall I can’t see the columns shifting around when there’s a 1 in a column. 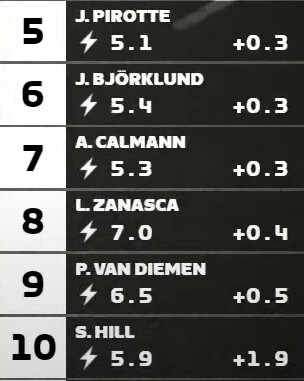 (This might already be a live change, I haven’t ridden recently)

yeah, but it’s not the same… or if it’s the same, they did quite an update.

not just the 1, but the 7 changed (that’s really changed in the font on the website… didn’t see the game yet).

in the zwift font the A is rounded at the top, the R is open inside, the S doesn’t have a curved drawing, only the corners and this one seems to have more contrast - if you compare, the horizontal stems are thinner than the vertical ones on the smaller, bolder texts… that helps also.

Yeah, it’s possible it’s a completely different font that they decided to use for the broadcast overlays.

But I don’t see why they’d do that. But if they do have a different font that’s better in several ways, well they should still put that into the game.

certainly not in game yet and the overlays for these headline events always were a bit separated from the game as in they took the game image feed then overlaid the extra rider stuff.

Zwift do have their own broadcast setup though so unsure.