Your perception of what is a climb probably depends on if you are a sprinter or not.

Exactly right. Not sure what it’s like in other categories, but in most of the C races I’ve seen the pointy end is largely contested by 90kg guys with 290w FTPs.

The slatted wood road feel doesn’t really work when the boards go over the bridges in the direction of travel rather than across.

Riding across mud, rough rocks and sand is pretty realistic as well, especially on TT bikes or road bikes, yeah…

Gravel climbs with a nicely paved road alongside them that we can’t ride on is also quite awesome.

You need a rocker plate with a full 180-degree range of motion to get the authentic “wheel gets caught in a gap between the boards” effect. Sold separately.

[quote=“Anna Ronkainen [AEO], post:126, topic:593068, username:Anna_Ronkainen”]
need a rocker plate with a full 180-degree range of motion to get the authentic “wheel gets cau
[/quote]

yeah, wondering how the rocker plate would have reacted the 3 times i hit a massive rock inside the cave

Nice pictogram of mech island when looking at it from map view. Looks like a giant robot or ultraman in a fighting postion. Mech island is zwift version of the real life japan’s space center.

Came here to say this! I don’t want to change virtual bikes during a ride. If I want MTB or gravel then I’ll seek that out.

Hard packed sand has same properties like paved road in Zwift. Therefore yuo do not need to change bikes.

But it’s slow. We don’t like that. Plus all the dust makes the graphics bad and FPS low.

I rode the Makuri 40 route today. I like the new release. My only complaint is the new closer view of my avatar.

Hey! Not sure if mentioned yet…but has anyone got eyes on the “sea monster” (or a dolphin or fish?) that jumps out of the water near the “Tidepool Sprint”?

I saw it during a race yesterday but the screenshot bug kept my fingers far away from that button. Couldn’t pull up a camera on my phone fast enough to catch it.

I’m wondering if it’s common or something as elusive as the Yeti on AdZ.

Thought I saw it when it was night.

has anyone got eyes on the “sea monster”

Yes. It’s near the big waterfall in the beach area of Urukazi.
A violet dragon kind of monster. Seems to be friendly until now.
This could be an adolescent of the Dragons the Mechs are fighting on Mt. Fuji.

I actually do not think, that Zwift is going to let any kind of fighting going on.
Therw has to be a twist in the Dragon/Mech saga.
Maybe the Mechs are nursing or protecting the dragons.

We have those kinds of “pick a plank” bridges here in my country. I’ve seen in racing they tried to put mats over them so riders wheels wouldn’t get trapped. Very hazardous.

Personally if I were the comm of that race I wouldn’t be happy with that from a safety point of view. 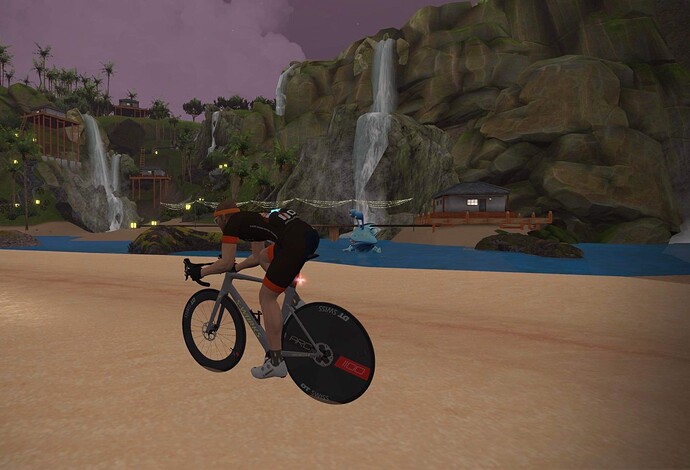 That looks very similar to one of the balloon type things in the Onsen village.

…and now I’m wondering if that’s a DIFFERENT sea-monster: the one I spotted was on the ocean-side of Tidepool Sprint, and I vaguely recall it being taller and skinnier.