I removed the Zwift app then did a complete factory reset on my Apple TV then reinstalled Zwift. It’s the latest Apple TV 4K model.

I am still getting the same issue.
Ignoring the HR strap issue I get the error below when just trying to add the Suito as both a power meter and a controllable device. No other devices paired. 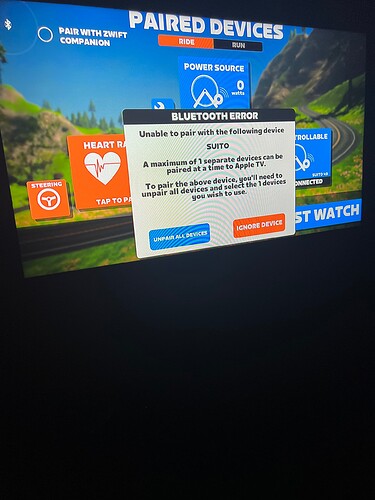 If you look above at my first post, I too received that error the very first time post upgrade. I selected unpair. Then paired everything again. Worked fine then and worked fine again today.

edit: No, I didn’t have to unpair or anything today. Everything worked right from the start.

Have tried unpairing all devices and still have the same error

I am tired of it,
I uninstalled the software, even uninstalled the 4iiii software on my phone, and created a new bridge with my ANT cadence sensor.
Reinstalled the whole stuff.
Tried a hundred times to pair unpair, with all the errors, and then suddenly I was able to pair everything, my bridged cadence sensor worked Viiiiva163 cadence and HRM!!! 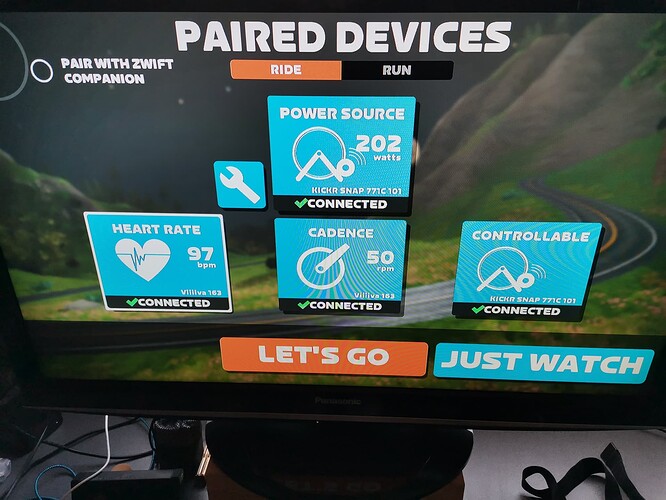 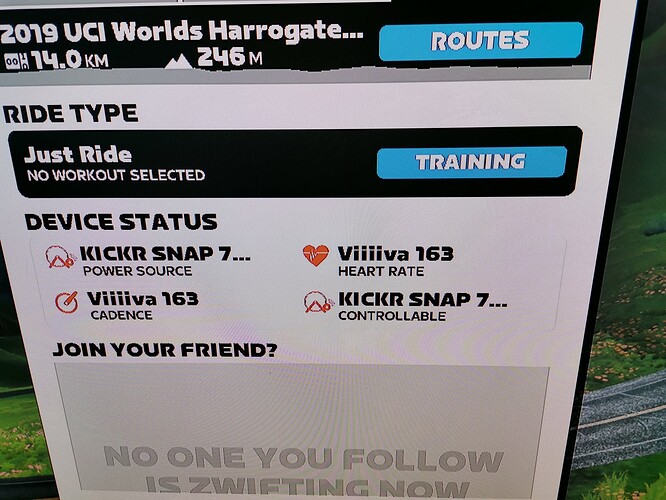 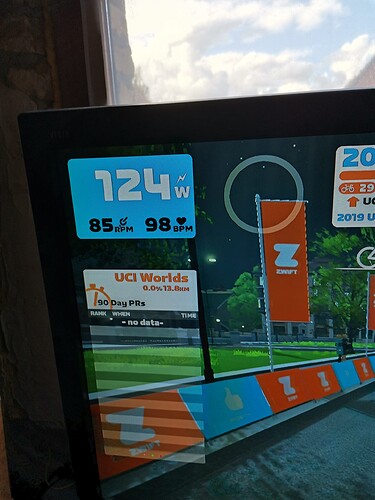 So me happy, I end the game, and restart it, same bllsht again! No matter what I tried: 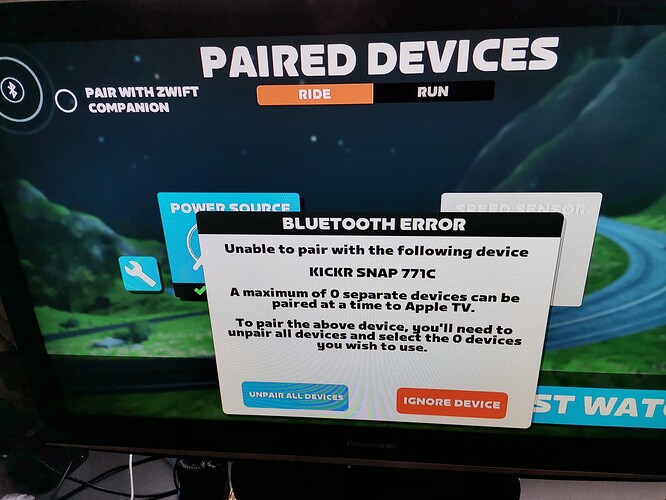 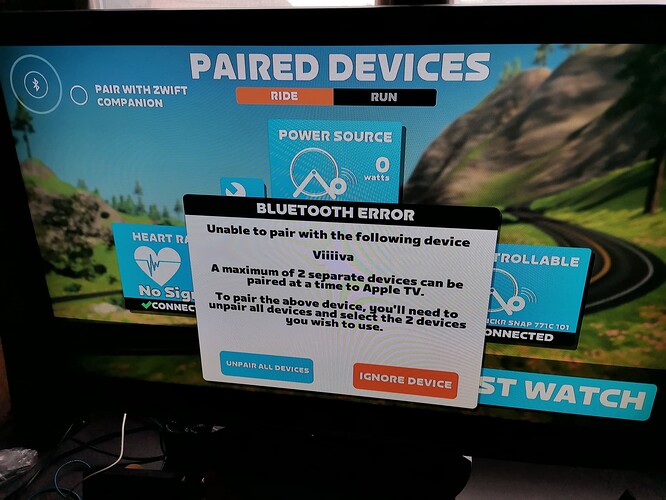 For all those of you, who are telling: “works it works I have no problems”. YES indeed, it works, but NOT with a bridged ANT sensor using the Viiiiva HRM!

And I am not sure anymore, if it is an ATV flaw or a Zwift flaw …

I still haven’t replaced the battery in my p2max, so I can’t say for sure what will happen when my Viiiiva includes the p2max in the signal and I attempt to pair it.

If you don’t bridge cadence, i.e., just ride w/out cadence does this eliminate your pairing issues? Cadence in game doesn’t do anything. At least you would have a short term solution until Zwift figures this out.

Have been getting the same issue and just been trying mine again, I don’t get this issue if my HRM is not on at the time I start connecting my Kickr, once the kickr is connected I can then activate the HRM and all is good, only seems to happen when everything is on and ready to go from the off, a work around for now until fixed.

Apple TV will not run the Zwift app with their current 1.29.0 version on TV OS 16. It will not pair with Hr and the smart trainer as previously possible with earlier software.

The temporary solution is to log in as normal. When you get the “Bluetooth Error” message (which you will every time you try to run the app) - simply select “unpair all devices”. Then you must pair items in this EXACT order. First pair “Power source” (the smart trainer will automatically list as connected, and (ORDER IS CRITICAL) then pair cadence (it will pair with the same bluetooth channel as the power source and smart trainer. LASTLY pair heart rate.

You will have to do this EVERY SINGLE TIME YOU START THE APP UNTIL ZWIFT CORRECTS THEIR TV OS APP.

You are not correct. Apple TV WILL run the Zwift app with the 1.29.0 version and TV OS 16. I have done it with no issues using my Tacx Neo 2 and a Garmin Dual HRM. It appears to be true that some, maybe even most, are having some issues, but it is patently false that it will not work.

Updated to tvOS16 and Zwift 1.29 yesterday. Everything worked as usual, no issues.

Same here, no problems (yet) after both updates.

AppleTV’s main advantage for me is the it just works aspect. I’m not enjoying doing battle with it every Zwift session and I’m looking forward to a resolution.

In fairness, Apple seems to have changed something in their game center that is triggering this issue.

Apple says “many additional Bluetooth and USB game controllers are supported by the Game Controller” starting with tvOS 16;

Again, I have no problems, as long that I only use the two native ATV bluetooth connections or when I use the companion app, to bridge my connections.
Only when I use my Viiiiva HRM as a bridge for my ANT cadence device, then it goes wrong.

Same problem for me after update Zwift and AppleTV.

EDIT - I wonder… has anyone experiencing this issue gone into ATV Settings (not Zwift settings, rather that gear icon on the ATV home screen) and UNpaired all bike-related sensors/trainer, followed by ONLY re-connecting them inside Zwift?

What got me thinking about this was a screen cap someone posted above showing the max connection error and mention of an Apple Game Centre update. I wonder if there’s some kind of disconnect and ATV is double-counting connections between main device settings and Zwift in-game pairing.

Oof. Thanks to those who posted information about this issue. I managed to disable automatic OS updates before the ATV attempted to install TVOS 16. Hoping this gets sorted quickly for the rest of you.

Indeed. I’ve used Zwift on “all the platforms” but come back to ATV for the convenience.

On a 4K OLED TV (32”, about 2 feet in front of my bike) the visuals are quite nice. AFAIK, while the avatars and game world aren’t rendered in full 4K, the HUD elements are, and it’s noticeable how much sharper they are versus 720p/1080p/2k res. The tv might have some kind of upscaling algo at play too.

I could pair just the Kickr, but when I tried to pair the HRM, I got the bluetooth error about too many devices.

Have just run another test. Checked Bluetooth connections on ATV and no devices connected 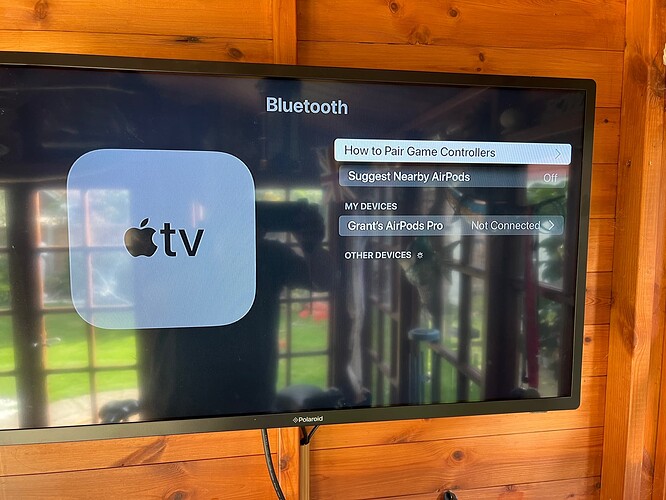 I then added My Suito as a power meter and all was good. 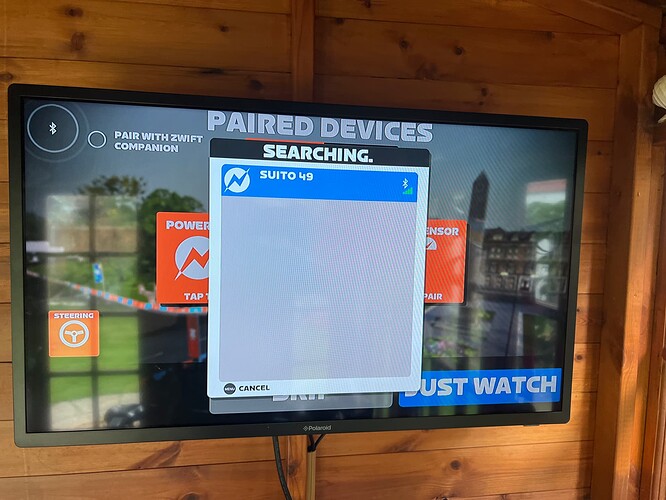 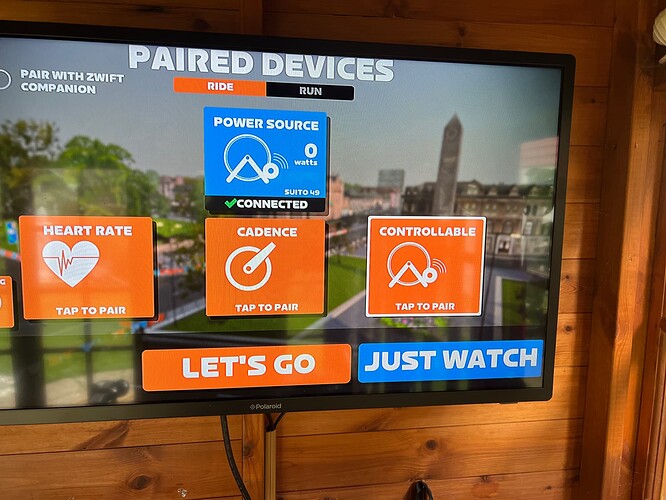 So one device added, I then try and add the Suito for the controllable device and I get the following screen saying about a maximum of one Device 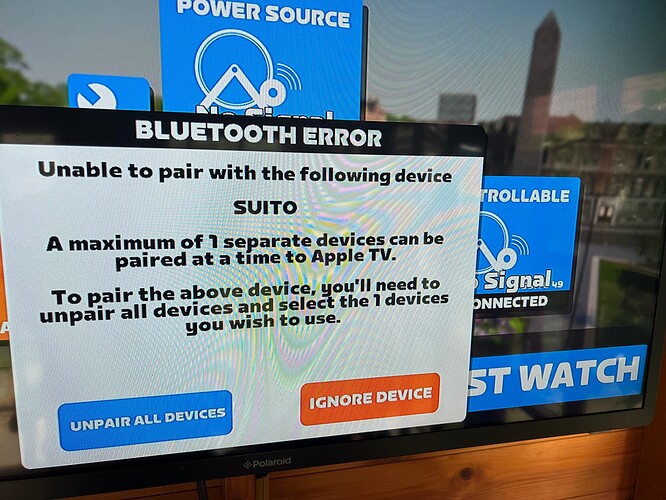 I am curious as to whether having the ATV ‘forget’ your Air Pods would solve the issue. Even though they do not appear to be connected, I am wondering if that is somehow causing an issue in the new TV OS.

Just did the baseline rider on ATV.

Though, my ATV drops the HR by default when I start it up (2 x users, different HR straps), so the Atom auto connected as controllable, power source & cadence, I then added the 4iii HR.