[Please ignore thread] This is going to cost us money.... (Supported OS changes)

(not posting to the original thread, as it is locked…)

So, Zwift has decided to move forward with phasing out support for some platforms. Quoting from received mail: “Starting August 10th , we will begin deprecating certain operating systems based on industry standard minimums.”

Wherever the source for “industry standard minimums” is, seems I will no longer be able to use my existing Android setup running the Companion. Unfortunately, I don’t have another phone to repurpose - which means I will have to buy a new one:

Sustainability? Environmental impact? Forget it. New functionality resulting from moving to newer OS versions? None has been mentioned, so cannot comment.

2 years isn’t a reasonable assumption. The newest Android version that Zwift are deprecating is Android 8, which came out in 2017. So as long as you don’t buy a new phone that has a 3-year-old version of Android on it, you should get a lot more than 2 years out of it for Zwift support.

Whilst not speaking specifically for Zwift, I’ve worked for other software development firms who do not support older operating systems, browsers, etc. This is pretty normal.

you could buy a refurbished or used (read: unwanted store return), but essentially still new, mid range android phone instead. i don’t think the environment or preordained technological obsolescence by hardware conglomerates are zwift’s problems to solve, at any rate.

Supporting old OSes costs Zwift money which comes from all of us. Your desire to run old kit is putting your hand into our pockets, much happier you spend your money, not mine.

It takes longer to develop and test when you are having to do so on various different platforms.

respectfully, you are the one who decided to blame everyone else and the world for your own consumption habits without thinking. for the record, if you’re tossing your phone into a landfill just because it can’t run zwift in the future, i recommend selling or giving it to someone who just wants a phone that works instead

Basically, Google requires all new or updated applications to use Android API level 31, introduced in Android 12. Although Android 11 will be supported for a while (my understanding…) - this will also soon fade away. How long will Zwift allow level 31 apps is anyone’s guess… (2 years?)

Given that Zwift haven’t said they’re dropping Android 9 and 10, I suggest that there’s more to this than the above.

I sympathise with the desire to keep old hardware in use, but mobile testing is relatively complex and expensive, taking resources that could be used to do better testing on fewer platforms. I suspect most users would be happier with better testing of features and more effort put into product development. If the phone is in good condition, consider donating it to charity and buying a recent-model used device to replace it.

As a developer who ends up with several older devices that used to be used for development, one way to continue using an old device is to update using a Android Open Source Project (AOSP) version such as Lineage. I use an old Nexus 6P with Lineage to run the Companion application for example.

I’m one of the people affected by this as my phone i use for ZCA is about to be made redundant.

I can’t really complain as it’s about 7 years old.

I’ll look to pick up a cheap phone somewhere…unless anybody here wants to donate one to me.

Can it run iOS 12? That version got a reprieve for Companion (see the main thread on minimum OS versions)

UPDATE July 28: Companion will continue to run on iOS12 for the time being. 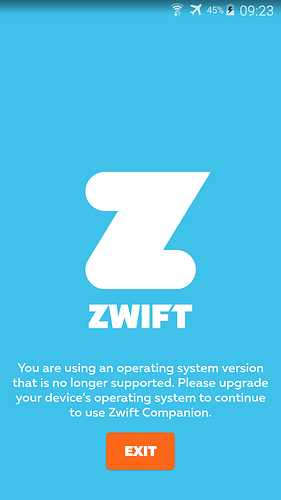 Android Custom ROM - Lineage OS - HTC One M7, bought 2013.
Welcome to Android 11!
Not the easiest way, but (including reading manual) in 2 hours with 0 cost done.

Edit: I don’t know why this thread should be ignored (see title) instead of trying to point the people who want to use older devices in the right direction. I am using my old friend HTC One for Zwift Companion, with 0 issues.

My Galaxy Tab S on Android 6.x is still working fine, but I’m ready to pounce on Lineage as well. Good to hear its working fine for you @Milan_Rost

Lineage? Really works? What build of lineage do you have? As far as I’m aware the Android 11 and up builds don’t support signature spoofing and have no playstore unless you are using GAPPS?

“(I think) a solution path exists” would’ve been a better description. Unfortunately, I am yet to reach the “solved” state: I was able to obtain an unofficial build of Android 10 (Lineage) for my model (slte), together with GApps, but failed updating TWRP to a version that will install it, half-bricking the device in the process.

As amusing as that may be, I am not sure this forum is the right place for Android custom ROM, TWRP, ODIN, FASTBOOT, bootloader unlocking, etc. discussion - But I haven’t given up on the solution (which, as I said, is yet to materialize…)

It won’t boot to phone… I can enter TWRP or upload, and (I think…) recognized by ODIN.