Hi @shooj, few issues with PD3 going up the alpe

Am I the only one who looks at this and thinks “awesome, the graphics break instead of people getting stuck behind others in the sticky draft or because the road’s too narrow!”

I’m ok with that as a compromise; I’d rather my avatar passes through walls than gets held up.

@Steve_Clogg_PACK_LEA
Thanks for the report and the video. I’ll pass it along to the team.

Please confirm it was this event?

I’d much rather ride through solid rock than be stuck up someone else’s ■■■■!

A possible solution for the washing machine problem in races with big packs could be that you get less draft from riders that are moving slower than you, so that when you come from the back with more speed you are slowed down from air resistance to the same speed as the bunch before you reach the front.

Hi @shooj, on the 3R Endurance Steady Ride [~3.0 // 2.5 w/kg avg] ride one Sunday the flashing of avatars was confirmed by a couple of riders, while others reported no issues (maybe those were in the front of the pack, where I didn’t have these issues as well). I have cut and converted the clip into an animated gif to avoid uploading on third party platforms; if you would like to have more evidence or the clip itself, PM me and I’ll mail it.

I actually think that is not related to pack dynamics but to to how Zwift only draw the closest 100 riders and they focus more on those infront of you than those behind, so if you are in the back of a huge pack you will see the once behind you drawn as they get close

ZRL TTT in London was rough. Not from a 3.0 performance problem, although the experience in the draft was different.
In France last week we found we could get quite good recovery in the wheels- this week it was super super grim trying to hold a wheel steady, and when we did the recovery was much much less than last week. And worse than 2.0 where we won on the same course with same number of riders and similar time.

Reeeeally good for PB power lol, not so good for efficient TTT racing.

So a bit of Sticky was maybe good for something???

I am having the identical experience being on the right in the bots it only seems to happen with the pacers and riding diagonal. Not sure if this has been flagged. It hasnt happened in a group ride yet.

I agree performance today in London ZRL TTTs seemed disappointing. Pack splitting sideways across the road too. There are a lot of small gradient changes in London and corners which make it hard to stay smooth, I wonder if that has something to do with it?

@Rowerman
Thanks for the GIF. I agree with Gerrie - I don’t think that’s got anything to do with PD 3.0 either. Looks more like the way avatars are drawn when there’s a lot of riders nearby to lower the RAM footprint.

In the ZRL TTT week 7, we had some incidents of riders being slingshot to the right. See picture. This happened just a few times and in the area where the screenshot is from. 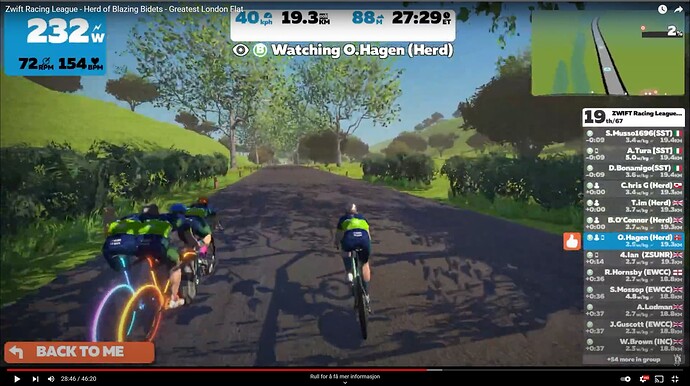 EDIT: I’m using BT to connect and have a Sterzo that is not connected.

There’s testing above that shows steering affects it whether active or not.

ZRL TTT in London was rough. Not from a 3.0 performance problem, although the experience in the draft was different.
In France last week we found we could get quite good recovery in the wheels- this week it was super super grim trying to hold a wheel steady, and when we did the recovery was much much less than last week. And worse than 2.0 where we won on the same course with same number of riders and similar time.

Reeeeally good for PB power lol, not so good for efficient TTT racing.

So a bit of Sticky was maybe good for something???

It was super grim. I got dropped while riding higher w/kg than my teammates. We were all on similar bikes and within 2 w/kg of each other. Pulls at 400 watts and I had to ride at least 330w to stay in the wheels. According to what ZI is saying, I should have been able to “recover” at about 290w but I was dropped like a rock before I got close to watts that low. Regardless, this PD 3.0 reduces the draft way too much. After reviewing our various videos, we suspect there was a bug that was affecting my avatar so I uninstalled, reinstalled and will give it another crack. I’ve never done an IRL or online TTT that was so hard that I cracked 13 minutes in.

Earlier tonight I was riding with the C. Cadence crew. Around the Fuego Flats sprint, I got into a tight bunch and almost seemed to be getting squished against the right side of the road, and had to hold ~200w just to maintain my position. This went on for about 5 minutes. When the group thinned out a bit, I went off the front with just 150w, then back to ~2.5 w/kg for the rest of the ride… A few others in the group mentioned the same thing happened to them. Anyone else experiencing this?

I don’t have any steering devices, just a Wahoo Kickr Core and Climb connected with ANT+. No such problems when I rode with B. Brevet yesterday (smaller group). 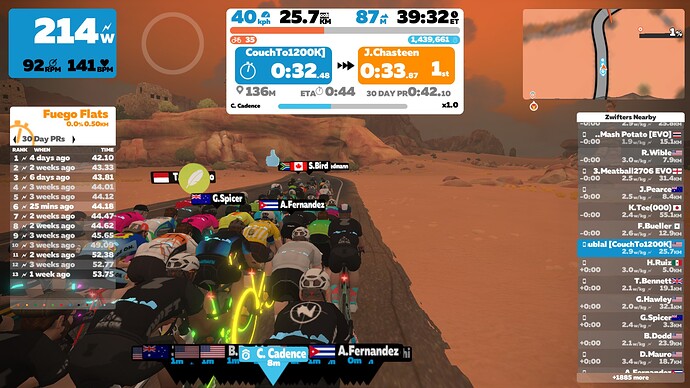 @CouchTo1200K
FWIW, I saw the squishing at the start of last week’s Ride with Reggie Miller event with close to 3000 people in it. 90 seconds after the start and everyone was stretched out - no visual issues.

The squishing is an overspill of many avatars funneling onto a road of fixed width. We’re aware that it’s not a great visual experience in large events, and will work on it.

As for the power requirement to hold position? IRL racers fight to move forward before bottlenecks in the road. Not speaking for the game devs (i.e. my personal opinion) but having to put out more power to hold your position when many others are passing you (even if you’re in someone’s draft) seems reasonable, no?

Was thinking about this yesterday while doing Seaside Sprint with about 50 A/B’s, in other words, a very large and very fast blob!

It wasn’t so much that other riders were passing me - I had to hold higher w/kg than them just to maintain position/speed when the group was moving at a steady pace. Check out the sidebar on the right… I know it’s just a snapshot, but I and a few other riders are around 3 w/kg and most others are at or below 2.5 (and I’d been holding ~3.0 w/kg for over a minute at that point). In the same segment on the previous lap, I was able to maintain the same ~40 km/h with ~160w (2.1 w/kg) and my average power was 16w lower.

I’ll try to get a recording next time I ride.

That is a good point that you can’t simply plow through the middle of a peloton IRL, but since most of us aren’t doing our own steering on Zwift, I liked how the game used to let you move through the pack if you were putting out more watts. Riding through other riders wasn’t realistic, but neither is working harder than the rest of the group and not getting anywhere.