Its hard to get screenshots as I don’t know when the Pace Partner will give a Ride On.

Not sure if anyone else has seen this.

What about in the list of people that have given you ride ons after the ride?

They dont appear to be in the list after the ride.

The last one that did appear in the list was a ride with B Brevet and Danny Draft.

So only the new ones it seems to be affecting.

Ill keep an eye out for it on the next pace partner ride to confirm it 100%.

Their set up is identical apart from paces/names etc.

I wonder if pace partners now having no first name (“. Coco”, as opposed to “C. Cadence”) could be causing this.

They technically have a first name. It’s just " " (one space)

The Pace Partner Ride On now appears after the ride in the list of people that gave you a Ride On.

However the visual in game bug still remains where it only shows the Pace Partners Flag in the display at the top instead of the text “Maria says Ride On!”

Screenshot of what I’m referring too, only the flag appears.

The actual Ride On after the ride does appear in the list of people. 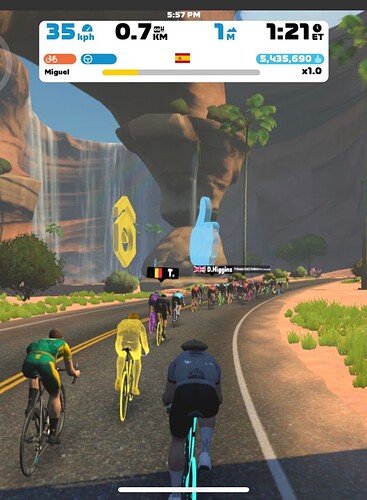 @Dave_ZPCMR That is not you up ahead

This bug has been fixed with V1.29 thanks Team

We added an initial to their names which should have sorted it. We’ll fix the underlying cause and change their names back, just not sure when.