I think it would be cool to have Maui as a Zwift world because it has some really cool stuff especially for those who like climbing because according to the Strava segment it’s the longest paved climb in the world being 34 miles and 9.7K feet of elevation gain so that would be a really tough challenge for those who are up for BIG challenges! It would be a total of 140 miles doing the route shown (including the up and down of Haleakala) but only 106 miles of road not including the downhill of the HUGE volcano! I hope you all like the idea because I think it would be really cool to have something like this. 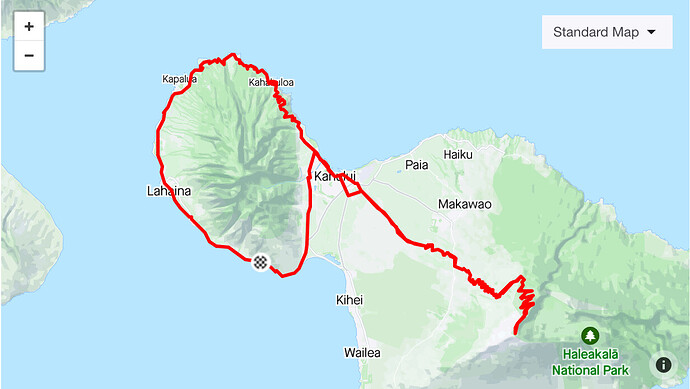 It would be cool to put this into an existing world- I think we have lots of worlds, so I would greatly prefer expansion over more worlds. Haleakala would be possibly the greatest addition ever! In that top left corner (NW corner) of Watopia seems great. Bring on the mountains!

That would be cool, but unfortunately Zwift never introduces roads or worlds based on customer suggestions. And big climbs in the game are not very popular routes compared to the flat stuff. I wish it were otherwise since I like the big hills as well.

While you are pretty correct- You must believe that it can be!

There are many, many worthy routes but I’m not sure the historical approach Zwift has taken is sustainable. This is where the competition is coming in with procedurally generated models from users’ GPS data. Zwift has the opportunity to leapfrog with a next-generation engine, assisted by machine learning models. Many new worlds can be made this way with minimal input, then later updated with a little artist intervention to be reasonably close to the real thing. The cute flourishes can then become optional, with the flick of a switch.