A little over a week ago I had no idea there was an option called “ultra profile” for Zwift graphics rendering, and by last night I was building my first PC to replace my Apple TV for running Zwift with better graphics.

This article from Zwift Insider by Dave Higgins was a great resource to get me pointed in the right direction. One thing that article did not touch on was the choice of the power supply unit…and unfortunately mine blew less than five minutes after firing up Zwift for the first time.

I guess my aim in bringing this up here is to help add to the knowledge base about what went wrong with the build. I used the Intel Core i3-12100F CPU and the NVIDIA RTX 3060 Ti graphics card. Running those CPU and GPU builds through power supply calculators suggested I would need 550 watts, so that’s why I ordered (in “Bronze” standard). Looking through gamer forums after the 550 watt PSU blew, I see people generally saying 550-650 is the right range for the PSU for this build.

I fired up Zwift and turned the resolution to 4K on the 1080 42" display and joined a robo pacer ride, and then poof, the PC shut down and the stench of frying electronics filled the room.

I can see three possible explanations for what went wrong here, and would like to solicit feedback from folks more knowledgeable than me about PC builds of what they think happened.

Thanks in advance for any opinions folks are willing to share or for questions about the details of the build.

Don’t believe that it should have blown that way due to an inadequate supply. The usual case is the machine won’t boot or shuts down soon after booting if supply is low. But a 550W supply is low for the NVIDIA RTX 3060 Ti graphics card, it calls for 600W minimum.

Thanks Dale, if I could do it over again (experience is the best teacher), I would definitely have gone for 650W, in fact I am going to replace it with a 750W “gold” unit from EVGA.

The motherboard is a Gigabyte B660M DS3H DDR4, and the PSU was made by Cooler Master. I’m confident by the way that it’s the PSU because of the black sludge I can see that leaked out of one of the capacitors when I took the PC apart. 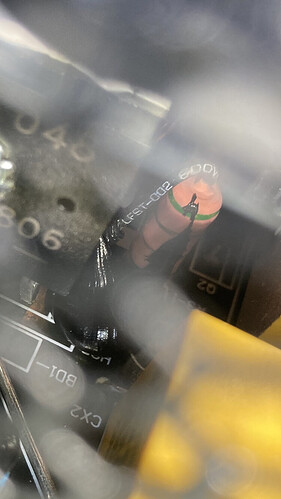 I hope you had the specific power supply cables connected to the graphics card?

100% that PSU should not have gone like that simply from being underpowered.

It’s a lemon for sure.

The GPU wouldn’t have drawn anywhere near enough power to exceed the capacity of the PSU, and even if it did, it wouldn’t explode. Definitely a dodgy PSU or maybe a short somewhere else with the connections.

I have the identical setup to you by the way… works a dream.

I suspect it’s a dodgy PSU.

I’d recommend going for a bigger PSU as well just to be sure and be certain it’s all connected correctly with the right cables to the right power sources.

My build is a factory built HP30L Omen with I7 and RTX3070, new from Bestbuy in Oct 2021, updated to Win 11 immediately. It has a Internal PSU 800 W ATX Gold power supply. Power comes in through a CyberPower UPS. Zwift runs without a problem. I also ran Prime95 which is even more power hungry. CPU went to 100%, 3 fans went to max speed, temp only went to 83°C.

Well done for taking the step of building it yourself. It takes some confidence but always results in a better machine than something off-the-shelf.

I’ll join everyone else and say that by far the most likely explanation is that the PSU was a lemon. No matter what the circumstances with the build or electrical supply (within reason) a PSU shouldn’t go fzzt.

In my (limited and outdated) experience, getting a decent quality PSU from a reputable brand is as, if not more, important than worrying about the wattage. Other brands are available but, I’ve always gone with Corsairs and have never had a failure. Touch wood…

Thanks everyone for the feedback and the communal assessment that the PSU was a lemon. I sent it back to Amazon.

I plugged in a new EVGA 750W PSU tonight, but unfortunately, the computer would not turn on. The led in the case is lighting up, but my suspicion is that when the PSU blew, it also fried the motherboard. I triple checked all the connections.

Now ordering a new motherboard and definitely feeling this adventure is like in for a penny, in for a pound. I don’t mind forking over the money for a good PC build, but it’s frustrating to have to repeat buy multiple components without knowing for sure which one is faulty, and also to have to wait a week for a new part to arrive to see if it will fix the issue.

Anyway, just venting…feels like this is a challenging “hobby” where it’s hard to figure out what is going wrong without having to spend a bunch of money to replace one item at a time until you get something that works…

If a bad PSU fried the motherboard, then you should be refunded for the cost of a new motherboard.

Oh, I didn’t know about the “clearing the cmos” fix. Will give that a shot later, thanks! Otherwise no signs of life.

Thanks for these ideas and specific instructions! I removed the CR2032 battery and tried (I think) to short the pins (I’m not an electrician). Still, nothing happened with the when I tried the RST_SW button.

I bought another motherboard (same as first one), and replaced the existing board, checked the connections. This time everything powered on except the graphics card.

It looks like the CPU was spared. But the $400 graphics card was also blown? Anyway, I’m just going to ship all this stuff back to Amazon.

I hope you had the specific power supply cables connected to the graphics card?

Yeah a noob mistake when I put in the new motherboard, I forgot about the offsets between the box, some of which were still attached to the back of the old motherboard, and as a result the graphics card wasn’t fully seated.

I was able to get the rig working again with the new power supply and motherboard, and it’s been pretty stable so far. Much better graphics experience.

Last issue to iron out is getting a stable connection to Garmin dual HRM. The Bluetooth connection is dropping out for 2-3 seconds every minute, sometimes longer. I’m trying an ant+ antenna and a different strap tomorrow.