Seems he did it again today in ZRL 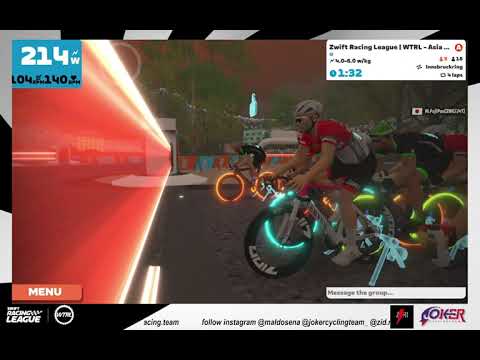 LOL looking at 30:00 it seem like it is not working. he goes to 9w/kg and then down but not keeping up with those holding steady 9w/kg

maybe he can’t hold 9 w/kg steady hence why he is doing it? He did set a PB afterall

Not watched the rest but he uses it pretty well to close down the front group after being dropped.

Makes a mockery of the mockery

love the fact he is literally called “joker”

Is he actually on this forum?

I think this is an interesting one to discuss.

In the part (around 30 min) that Gerrie pointed out, the rider still put out 300-500 watts when not sprinting. The rider generally alternated somewhere between 400 and 800 watts …which looked more like panicking/struggling than cheating. However, the rider did the same thing on every single climb and thru every sprint segment. During the sprint segments the rider usually alternated between the 600 range and somewhere between 100 to 300 watts. The behavior looked more deliberate in those instances.

I guess the question is at what point do “surging” watts cross over into cheating? Is it based on how far apart the swings are? Does the cadence have to drop to a certain point? Is there a more reasonable/enforceable definition than “I know it when I see it”? Without specific, easily understood parameters, how does Zwift address it?

for my 2 cents I would say on the climb his power or his cadence doesn’t hit zero when looking at the fit file because at this point as others have said he’s actually using sticky watts (there are loads of times when power is stuck at 600w+ for 3-4 seconds). If he executed this perfectly you wouldn’t even see the drop at at all as the trick is to start the next sprint before the “stuck” one drops.

So he sprints, stops and his combination of power meter and zwift holds the last reported figure as if it was a dropout for 2-4 seconds. He starts another sprint to get the watts up and the stops again. On the climbs he is starting the next sprint before zwift reports 0w and 0 cadence so the power never drops below 200-300w. In contrast on the decent and the flat he is less concerned with getting dropped so does the same technique but rests for longer between sprint allowing the power and cadence top drop to zero before starting the next sprint.

If this was a rider struggling which could look a bit like this in the last minute before being dropped, lots of little desperation sprints, the rider would eventually be dropped, not repeat over and over again, lap after lap and finish just off the podium.

Anyway I’m sure I have made my stance clear. Microbursts is cheating, sticky watts is cheating, pedalling in a ‘stupid’ unnatural way is cheating. Riders will do it, riders will try to justify it. Cheating is is here to stay while zwift bury their heads in the sand.

I would say if you feel you be robbed by someone using one of these methods, try talking talking to their team managers, I did and they acted on it on, I now hold said team in high regards in their commitment towards fair racing. Others, no so much.

Jamie, from your description of the data it loos like he is possibly using a combination of micro-bursting and sticky watts (I guess that’s possible if you have the “right” set-up).

My interpretation (and the following is total conjecture) is that you would need to inspect the data very closely at short durations, since both manifestations would give rise to very spikey graphs when viewed over longer timeframes e.g. a 45+ min race.

For sticky watts, I think the giveaway is a perfectly flat-topped power “spike” lasting multiple/tens of seconds. I think this “cheat” would be the hardest to control since it’s basically a rapid on/off of power once the “stick” elapses and the watts would probably drop well below the average before you could establish steady-state again (or spike again).

Micro-bursting spikes would have more of a shark’s fin profile (instead of being flat-topped). Since the drop in power here is reportedly more gradual than sticky watts (and possibly doesn’t last as long?), it may be easier to predict the decline and start the next spike before the watts drop too low? Here, the graph would show a marked positive deviation during the burst and only a minor (or no) deviation as it elapses (unlike Sticky Watts which would probably give marked positive and negative deviations around the norm).

Whether you consider these exploits as cheating or not, both of these “techniques” are considered to be “unusual pedalling styles” and, as such, would DQ a rider in certain events (most notably WTRL events, like ZRL).

Here’s a minute from same rider another ZRL race. 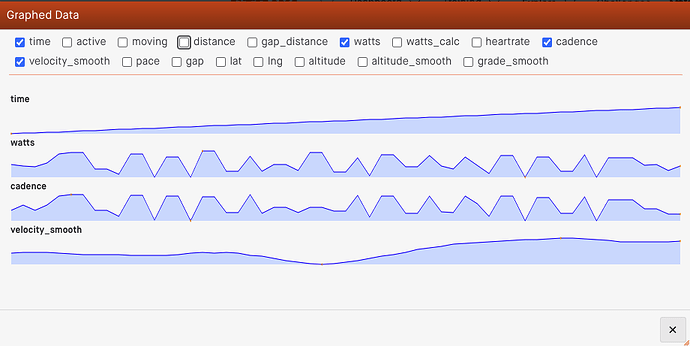 Lots of flat tops where sticky watts are achieved.
Tops are 600w and bottoms around 70w

Agree sticky watts, if achieved have flat top and requires certain devices, microbursts have spiked tops and can be done by anyone who wants to pedal like a dork.

The issue originally identified and investigated by Eric (and called sticky watts) was a zero input being treated as a dropout. The graph you show doesn’t have zero. It’s just microbursts.

Well it wouldn’t have any zeros as the fit file is from Zwift - Zwift doesn’t record the zeros, that’s the whole problem, it keeps the power on as if no dropout.

If we had dual record and the other fit file from lets says Assiomas, then it would show the zeros.

Below is Erics test, the point is Zwift doesn’t show the zeros yet recorded on another device it does. Hence why the sample I shared doesn’t have zeros. By that very fact it is showing sticky watts.

I can repeat Eric’s tests and post the charts showing a Garmin Edge fit file recording vs. the Zwift fit file recording as the power source is turned on and off, but I don’t know if this is against Zwift rules. I can also test non-zero power microbursts vs. an effort with the same average power on a timed segment. I assume Eric has permission to publish his test data gathered with bots.

Any guidance on doing this?

Yeah, the rules are that if you embarrass zwift, you’ll get banned, if you fluff them, you won’t.

Nice. That will certainly be interesting.

Do you have the relevant hardware to test these 2 effects independently i.e. a smart trainer (as the primary power source) which is well-known to produce the micro-burst effect and a set of power pedals or cranks to test sticky watts?

It would be nice if ZHQ would colour-code the little lightning bolt displayed against the “riders nearby” display on the HUD e.g. green = smart trainer, red = secondary power source. Could be quite informative?

Yes I do, smart trainers and pedals and several recording devices to compare fit files. I’ll say now that I can’t see a problem with the Zwift software and microbursts if Zwift reads true power data. e.g. alternating every few seconds between 50W and 550W up the Box Hill segment was 1.5 seconds slower than the time taken when I did it again but holding a steady power that was the average power of the microbursting during that segment. Club run, no other riders to interfere. The Zwift fit file power recording was clean, no discrepancies. So I’d agree that if anything funny is going on with non-zero power microbursts, it’s from the hardware. At least up hills.

So I’d agree that if anything funny is going on with non-zero power microbursts, it’s from the hardware. At least up hills.

Which trainer was your test with? If it wasn’t one where microbursting “works”, then not reproducing it doesn’t necessarily prove it’s only a hardware issue, it just proves that there’s a hardware dependency involved. Which we already knew, because it’s well-proven that certain trainer mofels can’t reproduce this microbursting effect.