I passed level 50 long ago and would love to be earning more levels. I love Zwift, but I also am interested in what is new and different. Rouvy now has actual Ironman courses. Because Zwift isn’t quenching that thirst I am inclined to try Rouvy and that might mean I don’t go back. Keep that in mind Min.

Doubt it, on the WoZ episode after Makuri launched, the frame rate on one of the dev’s screens is hovering around 10fps or less. I suppose that can’t be considered meaningful, but then again another clip shows a dev’s screen running what appears to be a solo bot test ride, and it’s around 25fps. Unfortunately it appears more likely to me that the acceptable minimum performance level for release is something far below 60fps. 20fps maybe.

Why not make some rare expensive items to buy in the drop shop, this way you can still try to achieve something very few will have. Like the Skelton suit for 10m drops or the paperboy bike for 20m, the transparent suit 30m

it isn’t very difficult to think up ideas for special items.

I just need a moving Fill Bar and the level count to tick over every so often, keep it simple and we might just get it, might, maybe…
Also don’t want more stuff to just clutter the garage for every complete level.
maybe special stuff, like at 50,000km you get 60fps on Neokyo

Maybe when you hit Level 50 the Dura-Ace gruppo should be adjusted to the proper weight!

So that’s where all the investor money went.

No thanks Tim. I’ve got enough work keeping my trainer and bike serviced and running smoothly without having to worry about doing the same for my virtual equipment.

Except I already have about 120 T-shirts!

I might pause my current account and start a new one, anyone want a race to level 50? 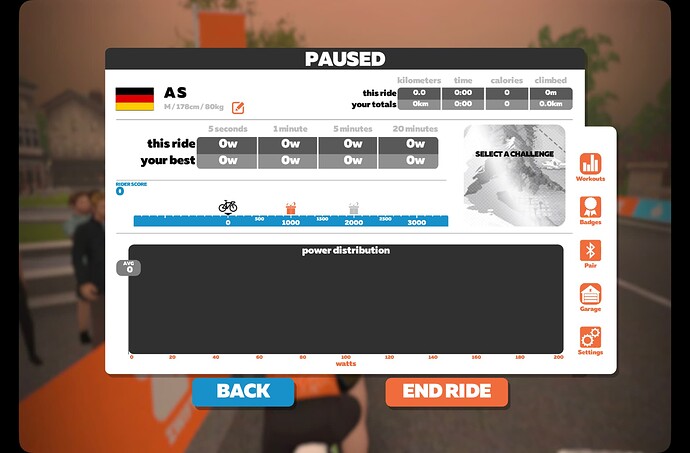 Make sure to select the Everest challenge when first starting out. . .

Make sure to select the Everest challenge when first starting out

I appreciate the tip. I have done this before, though.

Day one wasn’t too bad. Close to level 7.

When I passed the gate after lap 23 of the Volcano Circuit I had two bugs in a row. I grabbed my ATV remote without touching a button or triggering a tap and was greeted with an unsolicited U-turn (that’s a reported regression in a recent update as far as I remember), and when I passed the gate again from the other direction because of that I was being awarded route completion for the CCW lap (I thought that one had been fixed).

Come on, Zwift. Is it really THAT HARD to add a couple new jerseys, shoes, helmets, gloves, sunglasses and socks all the way to say lvl 80? Or 100?
They seem to be adding new drop shops cosmetics all the time for various events. What’s holding them back for lvl 50+ unlocks?
Sigh…

I’m almost at level 45, and moving pretty fast, I’d like to see level 50+ coming soon, since the levels are a HUGE carrot.

What are you doing to your real bikes to need that? My S5 2020 (Team Sunweb) is still going fine on original bottom bracket after more than 10000km.

Chain was still going great until I decided should change it. Only stretched 4mm.

I would not welcome this idea, and besides the high tech tron bike wouldn’t need this.

Maybe they could do triathlon kit for the triathlon riders?